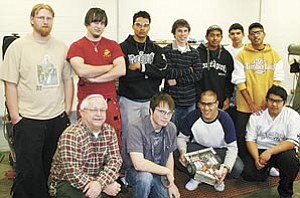 Patrick Whitehurst/WGCN
The Williams high School Slab Crabs, pictured above, hope to smash the competition to pieces in their upcoming tournament, scheduled for Feb. 15 in Phoenix.

Robo Viking ready to battle it out
Slab Crabs are prepared to cut, pound and spin the mechanized competition

After missing out on the final cut during last year's BattleBot IQ Challenge in Florida, members of the Williams High School Slab Crabs team say they have high hopes for a strong victory this year. The WHS students, led by teacher Larry Gutshall, will compete in the annual state tournament Feb. 15 in Phoenix. The Slab Crabs have won the state title two years in a row and took 13th place in the national standings in 2006.