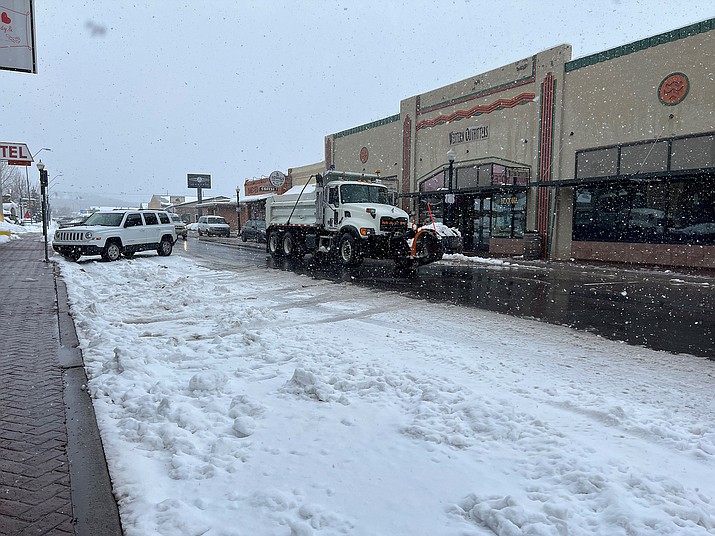 A missing teenager in Williams has been found safe after he spent the night outside in freezing temperatures, according to Williams Police Department. (Wendy Howell/WGCN)

WILLIAMS, Ariz —The teenager who went missing Jan. 19 spent the night under a tree, according to the Williams Police Department (WPD).

On Jan. 19 around 6 p.m., a family came to the WPD to report their 13-year-old son Gryffyn Edens, who has special needs, had left the house and had not returned. The family estimated the boy had been gone since 2 p.m. and the family was unaware of his location.

“When we received the report we estimated that approximately four to five hours had elapsed since Gryffyn had gone missing,” said Williams Police Chief Tad Wygal. “Additionally, when he did leave, the sun was shining and it was relatively nice weather. It rapidly deteriorated in those five hours and snow began to fall and it never stopped all night.”

An initial search was conducted by Williams Police Department and Williams Volunteer Fire Deparment. While searches were being conducted, Coconino County Sheriff’s Office Search and Rescue Team was requested, along with Coconino County deputies. A search grid and pattern was created. Numerous locals came out and helped with the coordinated search to locate the missing child.

Snow fell continuely throughout the night which accumulated to approximately 12 inches.

“We knew that he had a jacket, but between his shoes and pants it, was a pretty wet snow. We were just worried that between the temperature and getting wet that it would create an issue for him,” Wygal said.

The crew set up an incident command system at the Howard Johnson Hotel near Gryffyn’s residence. Through the hotel's surveillance system, officers were able to identify Gryffyn and his direction of travel. He was wearing light clothing, and carrying a backpack and frying pan. He appeared to be heading north toward the Love’s Travel Stop.

Williams police responded and confirmed the child was Gryffyn.

“We were very elated,” Wygal said. “Because we were beginning to be very concerned because the weather was just not going to be good for his health, and the alternatives were starting to worry me.”

Gryffyn was evaluated by medical personnel, but appeared to be in good health.

Wygal said Gryffyn told him he had curled up underneath a tree during the night.

The department thanked the Howard Johnson motel for the use of their facility during the incident. They also thanked Annas Café for providing food, Leo’s for providing coffee and pastries, and Sandovals Mobil and Shell for assisting in helping to locate Gryffyn.