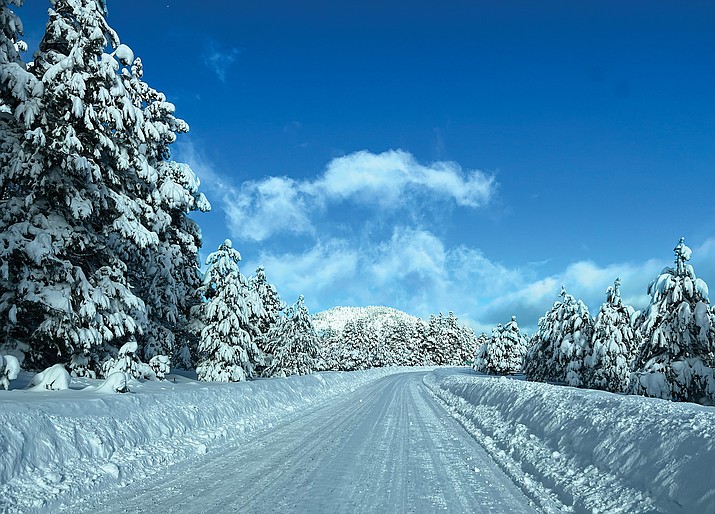 Over four feet of snow was reported in Parks, Arizona during last week's series of storms. The record breaking snow this season in the high country has helped alleviate the current drought status over central Arizona. However, evidence suggests the state is still in a long-term drought. (Photo/Wendy Howell)

WILLIAMS, Ariz. — As of Jan. 23, Williams has recorded 71 inches of cumulative snowfall for the winter season. That’s more than double the normal snowfall amount at this time of 30 inches, according to the National Weather Service in Flagstaff.

In January, Williams received 56 inches of snow, which is five times the normal January snowfall amount of 11 inches, said Brian Klimowski, meteorolgist-in-charge at the National Weather Service in Flagstaff.

Klimowski said the last time Williams had 60 inches of accumulated snow by Jan. 19 was in 2009 with reported snowfall of 61 inches.

As of Jan. 23, Flagstaff has received about 84 inches of snowfall for the entire winter season.

Flagstaff has received 60.4 inches of snowfall this January, which ranks it as the third snowiest on record, beating the infamous January of 1979 which had 59.4 inches of cumulative snow.

Average normal snowfall for January in Flagstaff is 20.9 inches.

While some may love the major snowfall more than others, everyone can rejoice in the fact that we are officially out of drought status thanks to the wet winter and monsoon season.

“These storms have helped to alleviate the drought status over central Arizona at this time. Now of course there’s still a long term drought that we can see in evidence with as far as along the Colorado, but up here on the rim, up here in Arizona high country we’re officially out of drought status at this time,” Klimowski said.

The bad news is, all that snow has begun to weigh on people, literally. For Williams and Flagstaff, Klimowski said the snow is approaching 15 to 20 pounds per square foot. All that weight could lead to potential roof collapses.

Ice dams are another concern. Ice dams occur when heavy snow buildup melts during the day and then refreezes when temperatures drop overnight. After several days of melting-freezing cycles, it's common for the melted water and ice to work up under the shingles until water enters the attic and eventually does damage to the ceilings, wall and contents. In cases where the ice dam goes unnoticed for an extended period of time, it can do significant damage to the building and its contents.

The National Weather Service recommends keeping gutters clean, using tools such as “roof rakes” to limit snow on the roof and keeping gutters and down spouts clear of snow and icicles.