He used to hike mountains. A stroke left him learning to walk again. 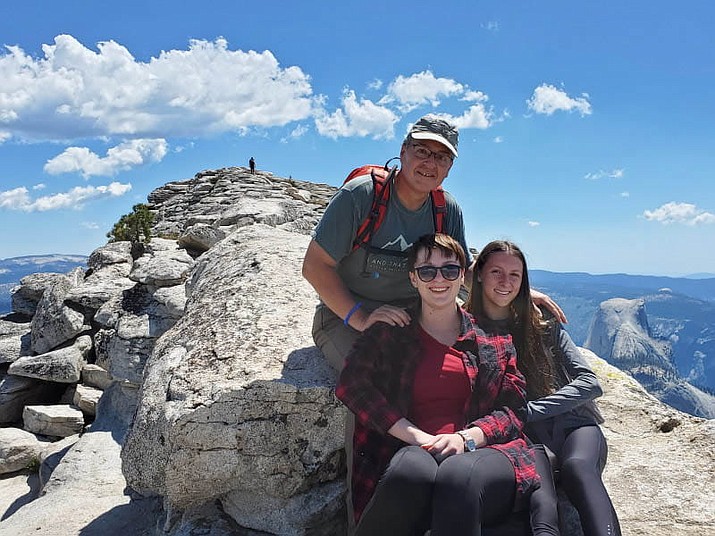 After relearning how to walk, Richard Samuelian has gotten back into the mountains in a big way. (Submitted Photo)

Richard Samuelian recently got back from a hike in Yosemite National Park.

A few years ago, the 52-year-old couldn’t walk down the hallway of his home in Fresno, California, without help.

Richard was watching television one day when he noticed he was having trouble seeing the screen. He started to see double and felt queasy. He got up and tried to walk down the hallway but couldn’t keep his balance for a single step.

He thought he had food poisoning – or vertigo – so he didn’t immediately seek medical help. Days later, he was still feeling terrible, so he decided to visit his doctor. At first, his doctor agreed that he probably had vertigo, but advised Richard to get an MRI, just in case.

The MRI revealed a stroke. So began a long, challenging recovery.

“I had to relearn how to walk,” he said. “I started with our living room, where I paced back and forth on the carpet and then I graduated to the grass in the backyard, because I felt like if I fall, at least I’ll fall on carpet or grass.”

After he mastered the living room and the backyard, he graduated to walking around the block. He was buoyed by small milestones of progress during his physical therapy exercises and motivated by his desire to get back to the things he loved – such as hiking.

Richard has always loved trekking through national parks and other wilderness areas with his family. Yosemite, Glacier, Zion, Canyonlands and the Grand Canyon are some of his favorite places to visit. When he was slowly putting one foot in front of the other across his living room, he thought about getting back into the mountains.

“I think his determination is the big thing that has helped him get better,” said his wife, Helen Samuelian.

Richard also overhauled his diet. He traded soda for water, cheeseburgers for grilled chicken, and pasta for fish. The massive cutback on calories, salt and sugar helped him lose 83 pounds since his stroke in March 2019.

“What kept me going for the next year was not only to continue to see weight loss and feel better, but also not wanting to go through that again,” he said. “I had my warning. I knew I had to listen and change my life a bit.”

While Richard didn’t experience any of the typical warning signs, like facial droop or slurred speech, it’s easy for him to look back and pinpoint some of the triggers that may have contributed to his stroke.

His diet of muffins and several sodas a day was an issue. His stress load was skyrocketing, as his dad was experiencing health issues and his workplace was going through a high-stakes merger.

These days, he’s learned to focus on what he can control. He makes an effort to leave his work stress at the door when he clocks out. And he’s leaned into the things that help him feel calm and grounded, like hiking and getting out into nature.

“I feel very comfortable in the mountains and nature,” he said. “It’s where I belong, it’s my calm and peaceful place.”

After essentially relearning how to walk, he’s gotten back into the mountains in a big way. In 2021, he completed the 15-mile hike up Clouds Rest – a trail in Yosemite National Park – with his teenage daughters. And this past summer, he finished a 40-mile hike through Yosemite.

That hike with his daughters reminded him why he kept going through every hard part of his recovery – and reaffirmed what matters most on the other side of his stroke.

“It took me longer than probably everybody else on the trail, but it felt great to get up there and spend a day hiking around a beautiful place with my daughters,” he said.

He has a 50-mile loop planned for next summer and he keeps himself active each week with regular walks around the neighborhood. He doesn’t want to lose any of that again – so he keeps going.

Richard’s recovery inspired some of his friends and peers to make their own life changes, such as visiting the doctor, managing stress and losing weight. He’s in a men’s group through his church and said he’s their “ghost of Christmas future.”

“The best stroke story is one that doesn’t happen,” he tells them, along with anyone else he speaks with about his survivor story. “If you make the right life changes, you have a much better chance of avoiding a stroke or heart attack at all.”