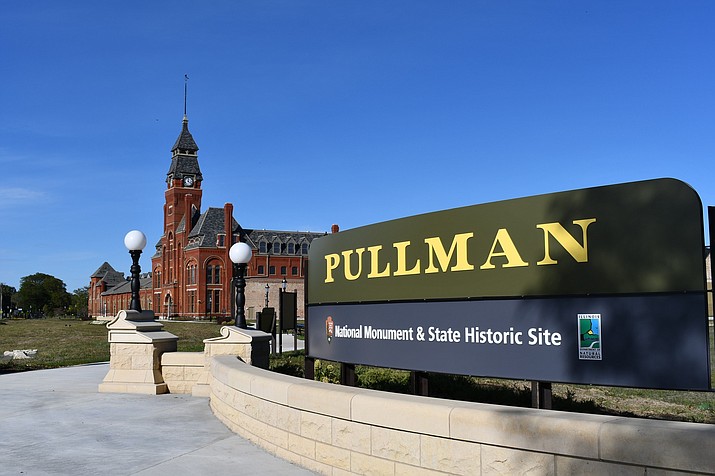 Pullman National Historical Park, the first national park site in Chicago, had its status changed to a national park by the outgoing 117th Congress. (Photo/NPS)

WASHINGTON — As the 2022 congressional session wound down, two Illinois monuments had their statuses officially changed to national historical parks.

The Burdick House is part of the New Philadelphia National Historic Site, which recently had its status changed to a national park at the end of 2022. (Photo/NPS)

New Philadelphia National Historic Site has been established as the newest national park to commemorate the history of early 19th century Black pioneers in Illinois.

Located near Barry, Illinois, New Philadelphia is the first town known to be officially registered by an African American. Frank McWorter, once an enslaved man, bought his freedom and the freedom of 15 family members by mining for crude niter in Kentucky caves and processing the mined material into saltpeter, by hiring his time to other settlers, and by selling lots in New Philadelphia, the town he founded.

The protection of the original town's location as a national historic site will permanently safeguard it for future generations and help preserve the important stories of Frank McWorter and others from the first African American town in the United States.

“We welcome New Philadelphia National Historic Site as the 424th national park and invite all to learn about the town and those who lived there. The designation of New Philadelphia National Historic Site ensures that Frank McWorter’s struggle, sacrifices and legacy will never be forgotten,” said NPS Director Chuck Sams. “It is an honor to steward these parks and programs that preserve the diverse pieces of our nation’s history.”

The historic Pullman community was designated a national monument by President Obama in 2015, making it the first National Park Service unit in Chicago.

The park tells the story of America's first planned model industrial community, the sleeping car magnate who created it, and the workers who lived there. The park is significant for its influence on railroad transportation, industrial innovation, urban planning and design, and the American labor and civil rights movements. The Pullman Strike and Boycott of 1894, and the establishment of the Brotherhood of Sleeping Car Porters in 1925, are watershed moments in American labor history.

"This is a very exciting and meaningful change for Pullman and yet another tribute to all of the Pullman neighbors and partners who have worked for decades to preserve this beautiful historic neighborhood," said park superintendent Teri Gage. "We are so appreciative of the Illinois delegation for their recognition and support of this special place. The name change will help visitors better understand the resource and what they can expect to experience at Pullman."

Other provisions in the Consolidated Appropriations Act of 2023 and other end-of-session bills include:

The NPS works closely with many stakeholders dedicated to the preservation of these important places. Their dedication helps the NPS tell new stories and share a more complete history of the United States.

The Consolidated Appropriations Act of 2023 provides $3.47 billion for the NPS for fiscal year 2023. This increase of $210.3 million (+6.4%) in funds from the previous year supports increased operations at many of the newest parks, invests in bandwidth, housing and other infrastructure, and increases grant funds for partners’ work in documenting, interpreting and preserving a broader swath of American stories.