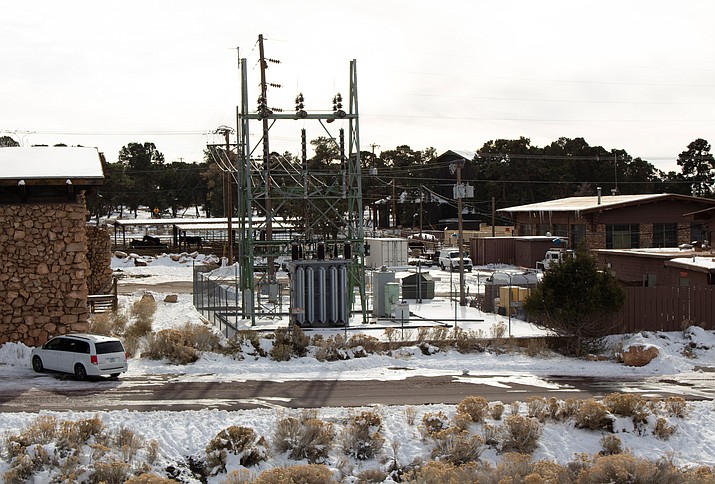 GRAND CANYON, Ariz. — Grand Canyon National Park anticipates that Arizona Public Service Electric Company (APS) will commence initial site work next month toward the construction of a new power substation at Grand Canyon South Rim Village. The substation is anticipated to be operational in early 2024, according to Robert Parrish, chief of planning, environment and projects for the park.

The project is estimated to cost $16.8 million and includes removal and construction of 2 miles of high voltage overhead lines according to National Park Service documents. This is the park’s third most costly construction project of its $940 million in deferred maintenance funded by the Great American Outdoors Act with revenue generated from energy development on public lands

Grand Canyon National Park’s existing 10-megawatt “substation was determined to be at its designed load capacity in 2019,” Parrish said in a recent email, which equates to 63 percent current peak usage and 96 percent load capacity.

Because of this, there is a potential for brownouts, or a reduction in power, at the Canyon, Parrish said during a June community meeting.

He also said the current station’s capacity is not adequate for the power required for the new Transcanyon Water Line, or for future electric vehicle charging.

The new 41-megawatt substation will be 6,000 square feet and located in the park’s utility corridor near Center and Clinic roads where the National Park Service already has high-voltage lines coming from Williams.

“About three-fourths of a mile of an existing dirt track that’s used for administrative purposes in the utility corridor area will be graded and paved to serve as the substation access road,” Parrish said. “The access road and substation are being constructed in the utility corridor parallel to Center Road and it’s tucked away from residential and high visitor use areas.”

Park residents will be impacted by the construction of new underground lines to a transformer in the residential area with open trenching of Clinic road and a few residential streets— and there’s discussions of changing traffic control.

“NPS doesn’t anticipate any road closures; however, there may be some temporary traffic stops or detours,” Parrish said. “Additionally, Federal Highway Administration engineers are conducting studies to determine if a temporary stop light, with a left turn signal for incoming traffic, at the turnoff from Park Road to Center Road needs to be installed. The stoplight is being studied with all major construction projects in mind, not just the APS Substation.”

“APS and NPS staff are projecting that up to nearly 16 megawatts load capacity will be needed during peak times for the planned EV infrastructure in the park,” Parrish said. “The majority of which will be for charging the Battery-Electric buses at the planned bus maintenance facility. That would bring the overall peak use for all current and planned infrastructure to about 77 percent projected load capacity of the new 41-megawatt substation.”

The Biden Administration announced that the National Park Service established the interdisciplinary EV Working Group to move fleets of government vehicles to electric as part of the Bipartisan Infrastructure Law in June. As well as partnerships with state departments of transportation to expand charging station coverage in national park gateway areas.

“(The EV Working Group is) in the process of transitioning Zion National Park’s transit fleet to battery-electric buses with $33 million in funding from the Department of Transportation’s Nationally Significant Federal Lands and Tribal Projects program – with plans to pursue the same program to electrify transit at Grand Canyon National Park next year,” according to the administration’s June announcement.

Across NPS the Infrastructure Law increased funding through 2026 to the service’s portion of the Federal Lands Transportation Program “20 percent to more than $1.7 billion,” allowing the park service to expand electrical transit systems and charging stations as trail improvements, according to a Sept. NPS press release.

“Planning and design for a shuttle bus maintenance facility project supporting compressed natural gas and electric shuttle buses was in development and eight electrical vehicle charging stations were installed in the park prior to the new act,” Parrish said. “Our newly hired Community Planner will have discussions with ADOT to determine which studies or needs assessments for charging stations should be completed and will incorporate those factors into the transportation planning and plans for the park.”

The relocation was first identified in 1995 in the GCNP’s General Management Plan which called for converting the powerhouse area into “a mix of interpretive and visitor service facilities” in order to restore the location’s viewshed— however no definitive plans have been announced for the area.

“The use of the open space from removing the structure will be determined in future planning efforts,” Parrish said.

The Transcanyon Water Line’s contractor selection has been pushed back to March which has delayed the closure schedule for the Bright Angel Trail and Phantom Ranch however construction is slated for that project to begin in 2024 or early 2025. GCNP has also launched a two websites for visitors to stay informed about construction projects at www.nps.gov/grca/getinvolved/tcwl.htm and www.nps.gov/grca/getinvolved/projects.htm

NPS will likely also announce the start of the construction phase of the new substation a few weeks prior to the start date according to Parrish.