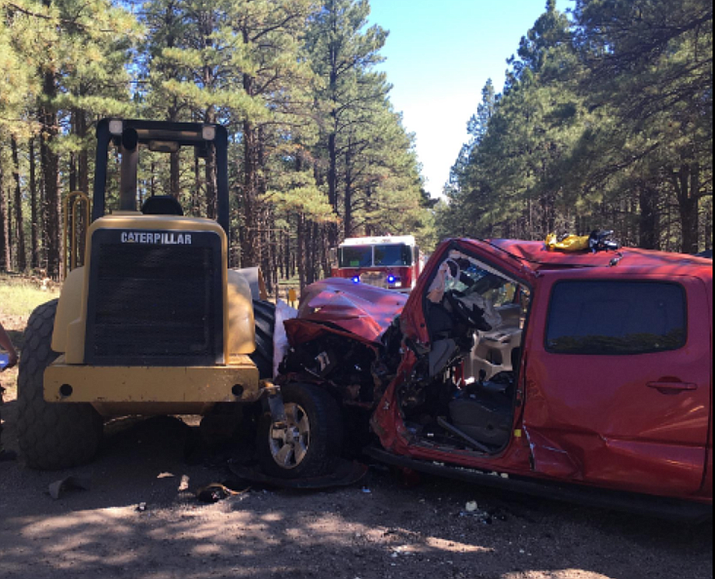 One person was seriously injured in an accident on Spring Valley Road in Parks Sept. 19. (Photo/CCSO)

PARKS, Ariz. — A man was seriously injured in an accident on in Parks Sept. 19.

Around 9 a.m. Sept. 19, Coconino County Sheriff's Office received a call for a vehicle that had struck the back of a road compactor truck on Spring Valley Road near milepost 12 north of Parks.

The reporting party advised CCSO that a Toyota Tacoma had struck the back of the road compactor and the driver of the Toyota was trapped inside the vehicle.

Due to the accident scene being in a remote area of Kaibab National Forest northeast of Williams, responding deputies requested the closest available helicopter to assist with treating the trapped driver.

Upon arrival at the scene, deputies observed a maroon pickup pinned against the rear passenger side corner and tire of a large road compactor truck.

The road compactor and truck were blocking both lanes of Spring Valley Road as machinery was in the area compacting the road as it crossed a cattle guard.

CCSO said several bystanders in the area attempted to access the driver by using hand tools such as crow bars and pry bars, to pry the driver door away from the frame as it had been crushed during the collision.

Deputies made access into the passenger compartment of the truck and began providing first aid to the injured driver who had sustained a left leg injury, which was bleeding significantly, the Sheriff's Office said.

"The deputy applied a tourniquet to the leg to stop the bleeding when Arizona DPS Ranger helicopter, from the Flagstaff Airport, arrived on scene and the on-duty Trooper Paramedic took over medical care for the injured driver," they said.

The driver was stabilized in the driver seat until a Ponderosa Fire Department engine and Lifeline Ambulance arrived on scene.

Firefighters were able to lift the dashboard off the driver freeing him from the truck. The driver was moved from the truck to the awaiting DPS Ranger Helicopter and flown to Flagstaff Medical Center for several significant injuries discovered during the treatment, the Sheriff's Office said.

The road compactor was in the area along with several other heavy equipment vehicles conducting road improvements to Spring Valley Road. The cause of the collision is still under investigation by CCSO.