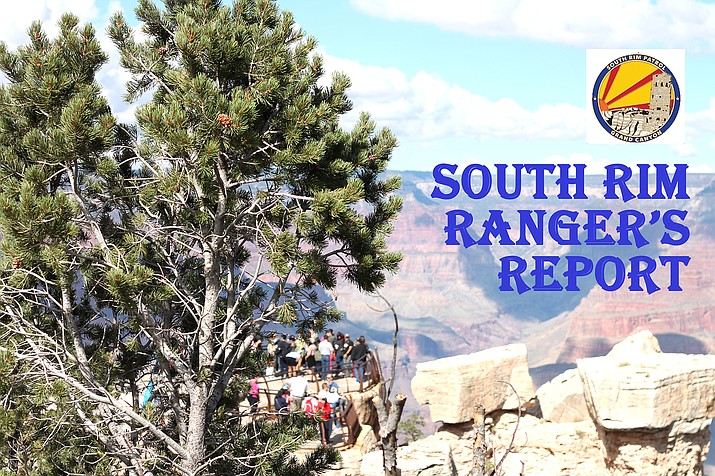 The following is a list of calls from the South Rim District Report for the period ending Aug. 27

On Aug. 16, rangers were dispatched to the Grand Canyon Rec. Center for a report of an intoxicated man threatening to fight others. Following investigation, the suspect, a 28-year-old resident of Tempe, Arizona was arrested and charged with being under the influence of alcohol and disorderly conduct.

On Aug. 16, law enforcement and emergency services were dispatched to a local residence for a report of a man in an RV with a gun shot wound to the head. The subject was found deceased on arrival. An investigation is on-going, the case is a suspected suicide.

On Aug. 16, law enforcement and emergency services responded to the Rim Trail near Verkamp’s for a report of a man having a mental breakdown. Investigation revealed the subject, a 28-year-old man from Tucson had consumed psilocybin mushrooms resulting in erratic behavior, and an inability to walk. He was transported to the hospital by ambulance and issued a citation for possession of a controlled substance.

On Aug. 16, rangers responded to a request by the Coconino County Sheriff’s Office (CCSO) to assist with a domestic violence incident at a business in Tusayan. Two men were detained 43 and 16. Both were residents of Springcrest, Connecticut. Investigation revealed they were involved in a physical altercation. The case was turned over to CCSO.

On Aug. 16, while out on the agency assist in Tusayan noted above, rangers were dispatched to Supai Camp Loop for a report of an intoxicated female causing a disturbance and endangering her one-year -old child. The suspect, a 27 -year-old female resident of Grand Canyon, resisted arrest and fought with responding rangers. She was arrested for being under the influence of alcohol - endangering her child, interfering with agency functions - resisting arrest, and disorderly conduct - breach of the peace. Guardian Medical responded to the scene to evaluate the infant for injuries.

On Aug. 16, shortly after the previous arrest, rangers responded to a domestic disturbance on Supai Camp Loop. A 29-year-old female resident of Supai, Arizona was issued a warning for disorderly conduct, and trespassed from a residence.

On Aug. 18, rangers responded to Boulder Street for a man who reported being chased by people. The subject, a 34-year-old male resident of Grand Canyon, was found to have a warrant for his arrest from Flagstaff. No evidence was found supporting the claim of being chased, however, signs of methamphetamine use were present. The subject was arrested for his outstanding warrant.

On Aug. 18, rangers responded to a report of sexual abuse/contact. The victim was provided victim services. A suspect was identified, and an investigation is on-going in conjunction with the Investigative Services Branch.

On Aug. 18, rangers were dispatched to a cold report of an assault at the Bright Angel Lodge. Victim, witness, and suspect accounts did not corroborate, and an investigation is on-going.

On Aug. 18, just before midnight, rangers initiated a traffic stop at Navajo Point for moving traffic violations that indicated possible impaired driving. Subsequent to investigation, a 26 year old male resident of Argentina was arrested for DUI drugs, possession of a controlled substance, and driving without due care.

On Aug. 19, rangers responded to the report of an open container in a vehicle driven into the public garage. During a search of the vehicle, rangers found a container with trace amounts of suspected meth. A citation was issued to a 28-year-old female resident of Savannah, Georgia, for open container of alcohol in a vehicle.

On Aug. 20, rangers were requested by the Coconino County Sheriff’s Office to respond to Camper Village in Tusayan for a report of an intoxicated and possibly suicidal subject. Rangers located a 50-year-old female sitting on a couch inside the residence drinking hard liquor from a bottle. Rangers remained on scene with the subject until CCSO arrived to investigate and evaluate for a Title 36 Hold.

On Aug. 21, rangers responded to Rouzer Hall for an intoxicated male who was threatening others. Rangers contacted a 49-year-old male resident of Grand Canyon who had been drinking and admitted to starting a verbal altercation and making threats to other residents. Neighbors heard the altercation and stopped the subject when it appeared he was starting a physical fight. The subject was arrested for being under the influence of alcohol, and two charges of disorderly conduct.

On Aug. 22, rangers responded to a report of a gunshot in the area of the Coconino Apartments. Rangers canvassed the area, but were unable to locate any suspicious activity.

On Aug. 23, law enforcement and emergency services responded to a motor vehicle collision at the South Entrance Station. On arrival, rangers found a 22 year old male resident of Blue Mesa, AZ, in a severely damaged vehicle. He was evaluated by EMS and released. Following an investigation, he was arrested for driving under the influence of alcohol.

On Aug. 23, law enforcement and emergency services responded to the Kachina Lodge for a report of an unresponsive female. Advanced life support was administered and she regained a pulse. She was transported to Flagstaff Medical Center via air ambulance after

On Aug. 24, law enforcement and emergency services responded to a motor vehicle collision State Route 64 near Grandview. Investigation revealed a foreign national had fallen asleep while driving, leaving the roadway. The subject was transported to the hospital for injuries sustained in the crash.

On Aug. 25, rangers were dispatched to Rouzer Hall for a domestic disturbance in progress. A 21 year old resident of Grand Canyon was placed under arrest for disorderly conduct.

On Aug. 27, rangers were dispatched to a fight in progress outside of Rouzer Hall. Rangers canvassed the area and spoke with multiple members of the public, but were unable to locate the involved parties.