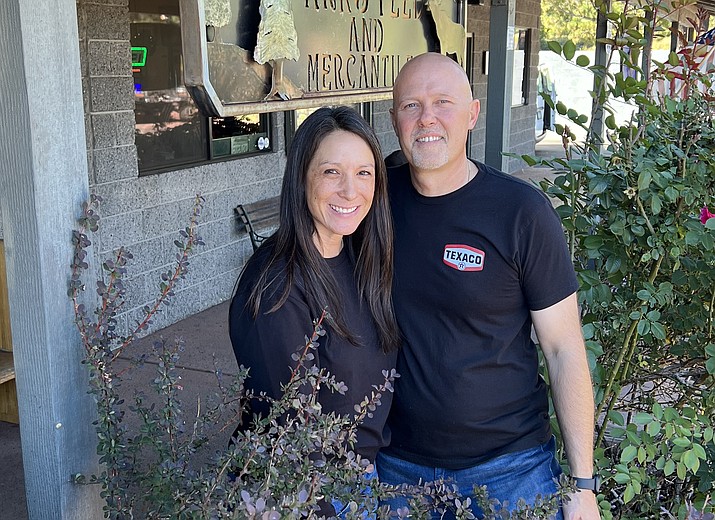 Sandy and Shawn Frate are the new owners of Parks Feed and Mercantile. (Submitted photo)

PARKS, Ariz. — Parks residents and road-weary travelers looking for, well, anything need look no further than The Parks Feed and Mercantile.

When longtime owners Bart and Peggy Bartel decided to retire and hand the business down, there were a few things to take into consideration: the new owners had to be familiar with the Parks community and committed to meeting their needs whenever and however possible.

New owners Shawn and Sandy Frate, who took over the business in July, were more than happy to agree to those terms. A longtime resident of Flagstaff, Shawn Frate was working for wholesale fuel distribution service Jackson Energy when he met Bart and Peggy four years ago. He was a territory manager working in sales and marketing, but he was looking for a change.

That change came in the form of Parks Feed and Mercantile, a gas station and convenience store that feels much more like an old-time general store than a 7-11.

Especially one with a feed store, post office, library and notary service attached.

And luckily for the locals, the Frates are looking to keep things as they are – after all, it’s been a popular stop since it first opened in 2000.

“Bart and Peggy did an amazing job taking care of customers and filling their needs,” Frate said. “Our goal is to continue their good work.”

Because convenience is one of the most important services Parks Feed and Mercantile provides, Frate said he’s not planning any major changes. He said hay and feed continues to be the store’s best selling items, mostly because residents from both Parks and Williams can get whatever they need without having to make a two-hour round trip to Flagstaff.

And since they’re open seven days a week, everything from groceries to alfalfa and Bermuda hay are available when other stores might be closed. Frate also says if a resident wants a special order, he’ll see if he can get it from one of his suppliers.

One thing Frate does plan on changing is the selection offered in the Mercantile’s grocery section – he wants to expand it to include more variety.

“Things like butter or flour or something someone may have forgotten,” he said.

Frate said he’s also always looking for feedback. There’s a list at the grocery counter where residents can add to a list of wants or needs. Interestingly, donuts are currently the number one request by residents. Frate also said he’s gotten several requests for frozen pizzas lately.

Parks Feed and Mercantile has always been a community within a community. Peggy Bartel began as a store employee before she and her husband purchased the business from the original owners in 2013. Frate said all the staff have stayed on and he wouldn’t have it any other way.

“We have a good support system in addition to a great staff,” he said.

The business is also a family affair for Frate. Even though his wife Sandy works as a bookkeeper and administrator for Flagstaff’s San Francisco de Asis Catholic Church, she helps out at the store whenever she can. Their two children, Jacob and Lauren, both in high school this year, also help out around the business whenever they can.

While Frate insists he’s still learning, it’s clear that he already has the formula for a successful business at Parks Feed and Mercantile — meet the needs of a tight-knit community and find ways to offer them more everyday conveniences where possible. The Bartels focused on excellent customer service, and the Frates are eager to continue where they left off.