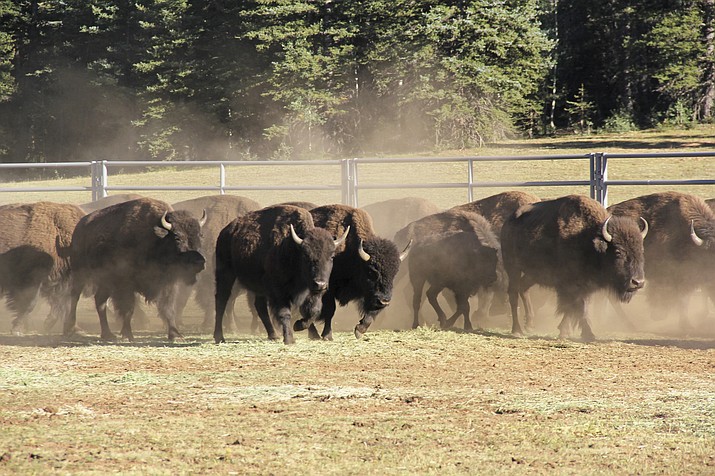 The bison were transferred to the Intertribal Buffalo Council, who transported the animals to the Iowa Tribe of Oklahoma and the Cheyenne River Sioux Tribe of South Dakota.

Since reduction efforts began in 2018, park staff have removed 203 bison from the North Rim with 182 transferred to eight different American Indian tribes through an agreement with the InterTribal Buffalo Council.

In 2014, the National Park Service (NPS) initiated a science-based planning process to manage bison overpopulation at Grand Canyon National Park. In 2017, using the best science available and working closely with the public, the state of Arizona and American Indian tribes, park managers finalized the Initial

Bison Herd Reduction Plan to reduce the herd from 600 to fewer than 200 bison using live capture and transfer, as well as limited lethal removal. This goal is being met as the 2021-2022 winter population estimate for the herd was approximately 216 animals before calving occurred.

In the last three years, between live capture and removal (by the NPS) and hunter harvest (AZGFD), approximately 358 bison have been removed from the herd. This estimate does not include 2022 hunter harvests on lands outside the park.

Grand Canyon managers would like to thank the multiple agencies and organizations involved with bison management on the Kaibab Plateau. The NPS continues to collaborate closely with partners at the InterTribal Buffalo Council, AZGFD, USGS-Fort Collins Science Center, U.S. Forest Service, and the NPS Office of Public Health to implement the relocation as described in the Initial Bison Herd Reduction Plan.

More information on bison management at Grand Canyon National Park, can be found at www.nps.gov/grca/learn/nature/bison.htm.