When journalist Laura Trujillo’s mother died by suicide in 2012 at the Grand Canyon, her loved ones were left stunned.
In observation of Suicide Prevention Awareness Month, Trujillo shares about her work in advocacy for suicide prevention 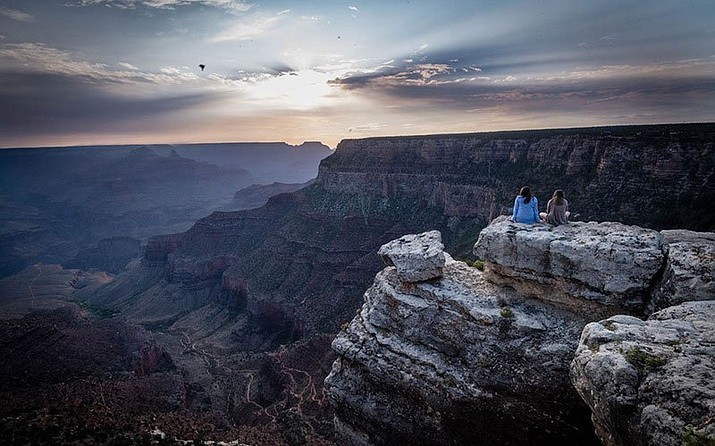 After her mother died by suicide at the Grand Canyon, journalist Laura Trujillo embarked on a journey to understand what had happened. As part of that exploration, she and her daughter, Lucy, returned to the Canyon. (Photo/Kelely Benham French)

When Laura Trujillo was young, her mother made her Halloween costumes by hand and attended swim meets and softball games. After Trujillo had her own children, her mom often accompanied them to Disneyland, hitting “all the scary rides with the kids.”

As close as they all were, the family rarely talked about their feelings. So when Trujillo’s mother died by suicide in 2012 at the Grand Canyon, her loved ones were left stunned.

In the wake of her death came questions. Should the family have known? What could have been done? Trujillo – a managing editor at USA Today – pondered these questions, and in 2018 began writing a story about her mother’s passing. It was the beginning of Trujillo’s advocacy for suicide prevention.

That story became a book, “Stepping Back from the Ledge,” which was published earlier this year. In observation of Suicide Prevention Awareness Month, Trujillo spoke with Cronkite News about her work and what can be done to help those struggling with suicidal thoughts, as well as those around them.

Could you tell us more about your mother?

She was really amazing. Mom stayed home when I was little. She actually went back to college, when I was in fifth grade, to become a nurse. And it was kind of fun because we were in school together. I mean, obviously not together. I was in grade school, and she was at college. … We would do our homework together, which was really fun.

I will say what’s been the most fun … was seeing her as a grandma, because I have four kids and my sister has four kids. … I think she felt very lucky to end up with eight grandkids out of the two of us.

When one of my kids was reading “The Hunger Games,” she thought it was too scary for him, so she read it at the same time. If he was scared, he could ask her questions. … She was really sweet like that. She would always write notes to people. She was very thoughtful. That is a good way to describe her.

What events led up to your mother’s death?

Obviously, when someone’s sick, you know they’re going to die because they have an illness or something. But with my mom … it was unexpected.

After my mom died, I tried to learn: How did we miss this? Or what did we miss? Or could we have done something? So that’s when I looked more at: Did my mom have any signs of depression or other mental illness?

You only know a little part about someone. I know my sister in one way, but her friends know a part of her, her husband knows a part of her. It was the same with my mom. I think all of us knew what a part of her was going through, but we didn’t all have all the pieces. … I didn’t know how bad things were.

After she died, I started learning that she had depression. … I grew up thinking my mom was wonderful and perfect. But when I look back, I can see that in times of her life when there was lots of stress, that’s when her depression would show up worse. There was a time when my grandmother came to live with us and (my mother) told us that my grandmother needed help. … I would have been 11, and I thought, “Oh well, that’s nice. We’re helping Grandma out.” My sister later clarified that, “No, Grandma moved in because Mom wasn’t doing well.”

When we put some of those pieces together, we can say that throughout life, (my mother) had some issues with depression or mental health.

How did you decide to write ‘Stepping Back from the Ledge’?

I started writing in pieces. I wrote about my mom a little bit on Facebook or Instagram. I would post a photo of her on an anniversary or birthday or write something about her. And I just started doing more of it. It was interesting because when I would post something, people would often tell me they had a suicide in their family at some point – which I didn’t know, even though I was close to them. Some people would say, “I’ve never told anyone this, but here’s what happened.” 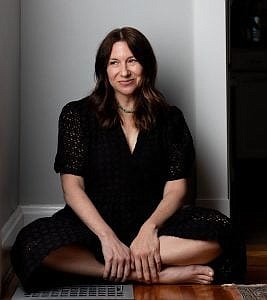 As journalists, we tell stories sometimes because it makes it easier for other people to tell stories or to shine a light on an issue. And so in some ways, I thought, “Well, maybe I should do this. But I don’t know if this is my story to tell or my mom’s story.” I could think of all the reasons not to: Is this going to make my family mad? Will anything be embarrassing? Do I want to open myself up to that? And then I thought, “Well, the alternative is to not do it and to not help someone.”

My mom said in her suicide note that she was too proud to ask for help. The alternative to not talking about it is not helping someone feel comfortable talking about their depression or whatever issues they’re having. My mom always used to say, “Work hard, be kind, be useful.” I could be useful in this situation, and that’s ultimately what led me to do it.

Please tell us more about the advocacy work you do on behalf of suicide awareness.

Most of what I do is either writing on behalf of it or talking about it. I am not someone who goes to volunteer at the walk. I could never answer a suicide hotline. I would be terrible at it.

I pushed the Grand Canyon to try and get signs up. When my youngest son, Luke, went to the Grand Canyon two summers ago, he got on the shuttle bus and they had signs up that said, “You’re not alone” and the suicide hotline number, which I had been kind of pestering the Canyon to do for the past couple years. … I hope that’s helpful for someone to see.

My daughter, Lucy, is 16, and she’s involved with the suicide task force for teenagers in Cincinnati. … Lucy and I have talked about if we should try to (place signs) at other parks, because it would be very easy for the National Park Service to scale that to other places. … It’s something I’m thinking about.

What advice would you give others trying to help someone with mental health challenges?

Some families are really close and they talk about how everyone’s doing – we were never that way. My dad always said, “If someone wants you to know, they’ll tell you.”

How do we check in on people in a way that’s not intrusive but just friendly? … I don’t know exactly what that looks like, except to be kind.

If someone says “I’m feeling depressed” – well, what can I do to help? Do you want to talk about it more? Or are you talking about it with someone? Or do you want me to help you find someone to talk to? … I think it’s just not being afraid to ask, “Do you feel OK, being alone?” I think that’s all right to ask people.

How important is therapy in treatment for mental illness?

I’m a big believer in if you need medicine, take medicine, if you need therapy, go to therapy. It’s hard to say what works for everyone. … Some people feel more comfortable in that type of group therapy or grief therapy, some people are better with one-on-one. Some people, like me, go to therapy for a while and then don’t. It’s not this ongoing thing unless you want it to be. But for me, it’s very important. I think it’s a helpful tool. … I go to the dentist twice a year, I go to the doctor once a year, and I get a mammogram … shouldn’t people be getting some type of mental health checkup?

Can you speak more about your experience with mental health care?

The two major things would be that I went to therapy, and I was prescribed antidepressants. And I was honestly kind of afraid to take them in the beginning, which is silly, because you think, “Oh, I don’t know if I really need them.” I used to be like, “Is that bad? Is that a weak thing to do?”

I don’t know why I thought that. If someone else shared, “Oh, I’m taking an antidepressant,” I’d be like: Good for you. But for some reason for me, I was like: “Am I not fully trying?” I was taking it, but I was trying to reconcile in my head – “Is it terrible if I end up taking this forever?” And I was like, “Well, no, it seems like a good thing to do.”

With therapy, I learned it’s really hard to find a good therapist, and then it’s really hard to pay for a good therapist, but I think it’s very important. I do think companies need to be better at offering mental health care and calling it just health care, and not acting like it’s this weird add-on. So I think companies play a much bigger role in mental health than we think about, because even very big companies, they’ll pay for a knee replacement, but try to get them to pay for therapy or an inpatient residential treatment.

What role should the community and government take in suicide prevention?

I’m not sure how it should be addressed. But I think it is one of the big issues facing people. There was a really good article in The New York Times Magazine … about how giving people a livable wage could lessen mental health issues, and I’m pretty sure the answer is yes. … If everyone made enough money to just have one job, it would lessen a lot of mental health issues in this country. Looking at it from an economic standpoint can help get people to understand something because they care about the economy. They might not care about the people, but they care about the economy.

What do you think of the new 988 suicide prevention hotline?

Anything you can do to increase access and get people talking about mental health is definitely the right direction.