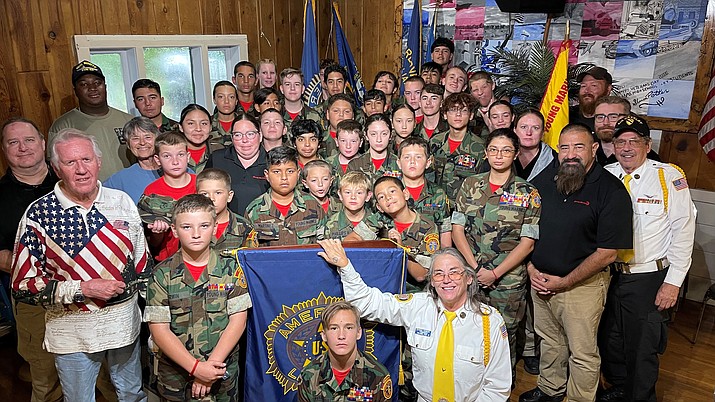 ASH FORK, Ariz. - To the average person, the tight formation of uniformed young men and women standing in the Williams Patriot Day Parade looks like an experienced group of JROTC cadets.

In reality, the group of young people represents Young Marines, a community program that works to instill values of discipline, leadership, teamwork and community service while promoting a drug-free lifestyle.

Last weekend, the Ash Fork Young Marines hosted other units from around the state for the Third Annual Matthew J. Broehm Memorial Stand Down. The youths spent the weekend performing community service, connecting with other Young Marines and learning a few drills with American Legion members. 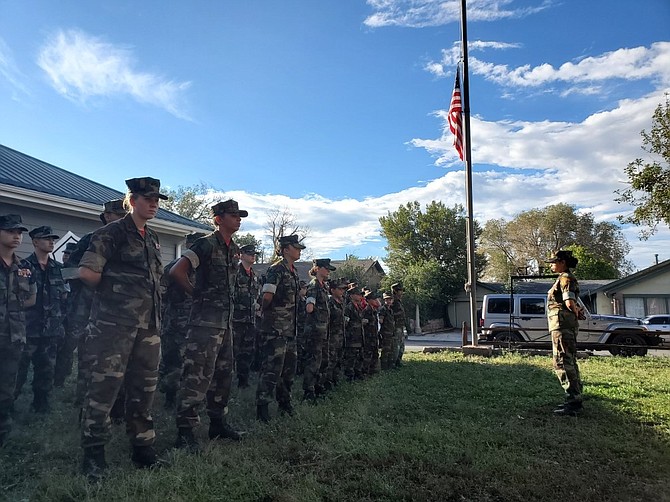 Although the Young Marines have been around for more than 60 years, the Ash Fork unit is fairly new – Ash Fork English teacher Jeaneen Leach established the group Sept. 10, 2020. When the school administration came to her and asked if she’d be willing to teach a leadership course, Leach modeled the program after the values, discipline and leadership skills she learned in the military.

When she heard about the Young Marines from a friend, she made her program part of the organization.

And while the program teaches valuable life skills, as well as soft skills the youths will need in a dramatically changed job market, it fulfills a more important role for many of the students in the unit.

“Some kids might not be good at athletics, or they might not fit in with other groups,” said Leach, who is a Marine Corps veteran herself. “Young Marines gives them a place to belong, a family who can support them.”

The Young Marines also promotes a drug-free lifestyle as a central part of the program. Members must participate in at least three hours of drug reduction classes a year. Leach said that while the program aims to steer the kids away from drugs entirely, it also provides practical information about the side effects and consequences if they do try them. 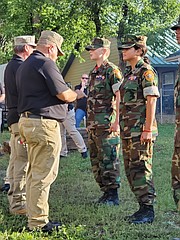 “The goal is to educate them before they see that peer pressure, or start hanging around with kids who are involved in that lifestyle,” Leach said. “But when you tell kids not to do something, the first thing they’re going to do is that thing, so we want to give them the information about side effects and such as well.”

Despite having a lower population than many cities with Young Marines units, Ash Fork has one of the largest units in the state.

Members range in age from eight years old to 14 or 15. Although the Ash Fork unit has only been active for a couple of years, future members will have the opportunity to belong to the unit from eight to 18.

While many of the group’s activities involve training, teamwork and discipline, Leach emphasized that the kids aren’t Marines – they’re participating in a community organization, and community service is at the forefront.

Members volunteer their services wherever they can around the Ash Fork community. Leach said some of their activities include helping citizens who are elderly or widowed move, building a greenhouse, installing fence posts and representing the Young Marines in parades or community events. The group also plans to help develop a community gardening space next spring. The unit is currently looking for community service opportunities for the younger members.

Perhaps more important that instilling a good work ethic and fostering leadership skills, Leach said the Young Marines are surrounded by positive role models. The group’s events, including travel, are facilitated entirely by volunteers. And while many of the volunteers are former military, it’s not a requirement – the great requirement is serving as a positive influence for Young Marines.

Jose Escarsega, the Regimental Commander for all the Arizona Young Marines units as well as the unit commander of the Territorial Young Marines in Yuma, agrees.

“The program is really great when you do it right,” he said. “You can really turn around some kids.”

Escarsega said the Young Marines is a positive influence for kids who are experiencing a variety of difficult situations beyond their control – they can often come from single parent homes, be economically disadvantaged or be struggling at school or home. Getting these kids into something positive that emphasizes teamwork, brotherhood, discipline and service.

Young Marines have the opportunity to earn rank promotions as well as attend leadership schools and travel to important military events. Escarsega said this often serves as an incentive for kids who might otherwise be inclined to act out.

“It’s an incentive to behave all around,” he said. “I’ve had parents ask me if I can come and talk to some kids who are out of line at home.”

He said the Young Marines is a source of pride, and being denied a promotion they may have otherwise earned is often enough to keep them in line in school or at home.

Since the organization tries to keep kids’ involvement as free as possible so that everyone has the same opportunities, a lot of fundraising and sponsorships are necessary. Leach’s Ash Fork unit, which often has to compete with other school fundraising efforts such as athletics and other extracurricular groups, said sponsorship is integral to her unit’s ability to do some of the activities, both official and fun. She said the unit is grateful for the continuing support the unit receives from Cordova Post 13, which has provided funds for uniforms, outings and other essentials.

As the Young Marines get into formation in the front yard of Cordova Post 13, a select few will be promoted to the next rank. Escarsega said kids have to meet certain criteria in order to progress through the ranks, with commanders making final promotion decisions based not only on activities but on intangibles such as maturity and leadership abilities. The formation of Young Marines isn’t headed by Escarsega or Leach – it’s led by a student who has progressed through the program and now occupies a senior leadership role.

“It’s not about us,” Leach said. “It’s about empowering the kids to lead.”

Even though the program is based on some military principles, Escarsega said not all Young Marines are headed from an eventual career in the armed forces – in fact, most take what they’ve learned and apply it to other areas such as business, management, teaching and more. 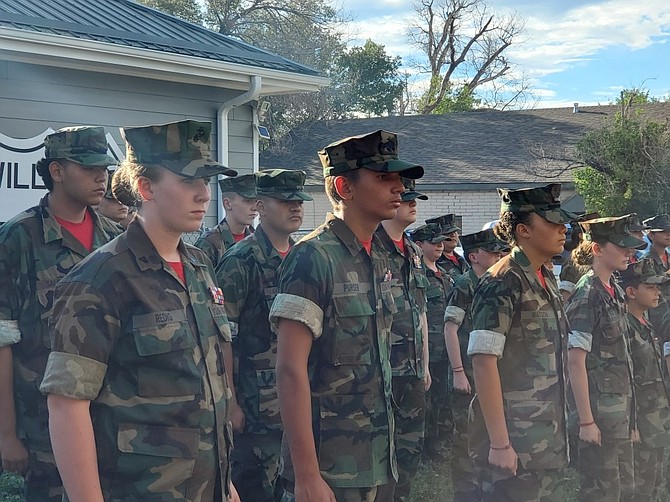 For those who do plan on a career in the armed forces, Leach said Young Marines who have completed the program with honorable conduct are eligible to graduate from Boot Camp with a promotion. Many members will stay in the program for all 10 years.

Members from around the state, including units from the east and west Valley and Yuma, joined the Ash Fork Unit to connect, learn and work side by side during Williams’ Patriot Day events. This opportunity to share the Young Marines experience with her brothers and sisters from around the state is what makes the weekend special for Corporal Reese Redig.

Redig, who transferred to Ash Fork from Seligman in the eighth grade, is one of the Ash Fork unit’s most senior members. She considers leadership of the younger members to be one of the most special things about being a Young Marine.

Redig said she likes that she’s able to make an impact on the unit’s younger members, both as a senior member and as the group’s chaplain.

“You don’t realize how many people you can help,” she said.

Redig said the weekend was a great success because getting together with units from around the state is something that doesn’t happen often.

“When everyone gets together you have this great camaraderie,” she said. “It’s like they’ve known each other forever.”