Expect major delays on 89A through Oak Creek Canyon; slowing on I-17 near Munds Park 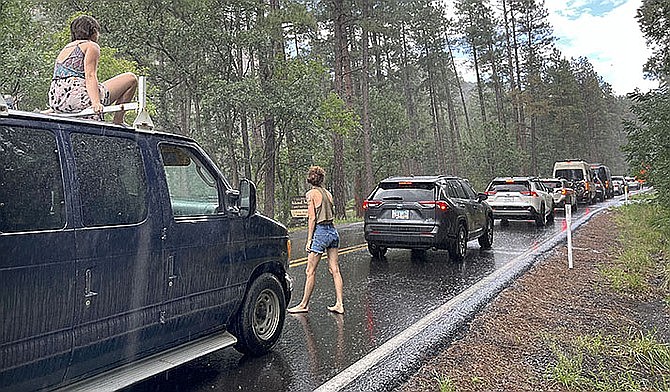 Motorist have found themselves delayed by a traffic jam at an automated traffic light while heading north in Oak Creek Canyon on State Route 89A Sunday, Aug. 28, 2022. (VVN/Vyto Starinskas)

SEDONA, Ariza. — If you are traveling to Sedona or Cottonwood expect construction delays on State Route 89A or Interstate 17.

“The one lane of travel through the north end of the canyon with temporary signals is expected to add approximately 45 minutes during weekday off-peak times and approximately one hour during peak travel periods,” he said.

And travelers trying to avoid the Sedona traffic delay by taking I-17 will also find construction projects between Munds Park and Flagstaff.

However, in Sunday’s heavier traffic, the delay was 45 minutes.

“About 12 miles of I-17 south is narrowed to one lane between Flagstaff and the Coconino County line for paving,” he said.

This project is anticipated to be completed in the summer of 2024, with shutdowns during winter.

Harding said there is currently no construction in the northbound lanes of I-17 but there will be paving work on I-17 northbound at Munds Park soon.

“It will be in one place, so it won’t have near the same impact as the work on I-17 southbound,” he said.

The current lane restriction on SR 89A in Oak Creek Canyon at the Pumphouse Wash Bridge is anticipated to be in place until December, Harding said.

There will be more lane restrictions and some closures on SR 89A through late 2023 as crews work on the other improvements on the project.

The entire SR 89A project is anticipated to be completed by late 2023.

Harding said ADOT is running both projects and plans projects “based on available funding and organizes those projects into our Five-Year Construction Program.

“Paving projects in northern Arizona can only take place during the spring and summer months when the temperatures are warm enough to lay pavement down and have it cure properly,” he pointed out.

Drivers in the region can learn about upcoming restrictions and closures by visiting the project website or subscribing to get alerts via email at azdot.gov/SR89A.