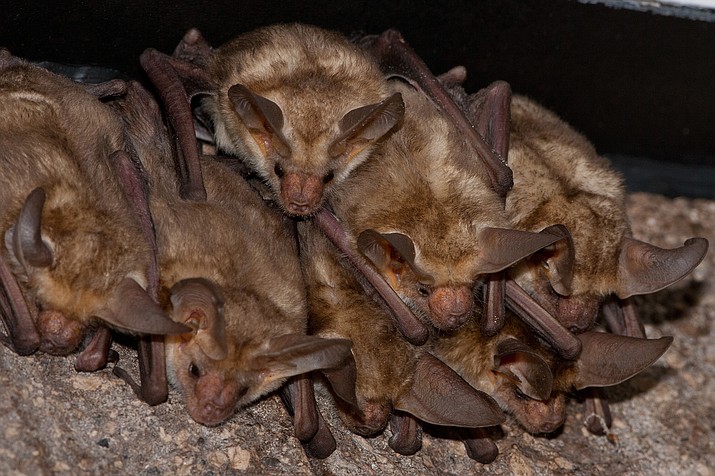 All mammals are susceptible to rabies, including bats, skunks, and foxes. Possible rabies infections should be considered in animals that exhibit unusual or aggressive behavior or that are not afraid of humans. (Bats in Arizona, stock photo)

It’s the first confirmed case in the park since 2020; the park usually tests around six individual bats a year for rabies with most coming back negative according to Grand Canyon wildlife biologist Brandon Holton.

“Typically we have 1-2 rabies detections in bats per year,” Holton said. “This usually occurs during the summer months when there are more bats on the landscape. There is no reason to believe that we will see an increase in rabies detections in bats in GRCA or elsewhere. Typically, less than one percent of bats, regardless of species, carry rabies. So (the) prevalence of rabies in bats is not as high as what people think.”

Holton is quick to point out the critical role of the 22 species of bats in GCNP’s ecosystem in everything from pollinating native agaves to consuming and the fact most species of bats in Grand Canyon are insectivorous, meaning they consume nothing but insects.

“(Bats consume) numerous terrestrial and emerging aquatic insects - river runners should be thankful- potentially preying on insects known to spread disease; serve as prey species for owls, hawks, and other birds of prey, and mammals such as ringtails,” Holton said.

“(Bats consume) numerous terrestrial and emerging aquatic insects (river runners should be thankful), potentially preying on insects known to spread disease; serve as prey species for owls, hawks, and other birds of prey, and mammals such as ringtails,” Holton said.

Scientists have discovered that some small bats catch over 1,000 insects in an hour according to the U.S. Forest Service.

However, the National Park Service said river runners should take precautions. River visitors in these areas should sleep in a tent for protection if possible, the park said in a press release.

Campsites along the Colorado River are common for bat-human encounters because of the location. Many of these campsites are located where side canyons join the river, which is a prime location for bats to forage for insects, according to Holton.

“Most of our bats are roosting in cracks and crevices in the different geological layers, and a lot of that occurs in the side canyon,” Holton said. “So, the first thing they do when they wake up at dusk is cruise down the side canyons to the Colorado River and start foraging.”

Bats often look for water when they first wake, he said.

Since 2016, Grand Canyon National Park has been documenting the distribution, biodiversity and seasonal activity patterns of its bats in response to white-nose syndrome, a disease caused by the fungus Pseudogymnoascus destructans. White-nose syndrome is estimated to have

killed more than 6 million bats in the Northeast and Canada. In some sites, 90 to 100 percent of bats have died, according to the U.S. Fish and Wildlife Service.

Low levels of the causative fungus have been detected at Grand Canyon, however, the disease itself has yet to be documented in the park.

“(There are) 14 long term bat acoustic recorders deployed throughout the Grand Canyon from the South to the North Rim and along the river corridor,” Holton said.

“(We) launched the project to get ahead of the curve and better understand our bat species in Grand Canyon in a pre-white nose condition,” he said. “(We want) understanding (of) basic life history patterns and winter habitat use in a system that has not had the effects of white nose syndrome.”

Holton said the monitoring makes it easier to assess trends, and have the data in the event that white nose becomes established in Grand Canyon.