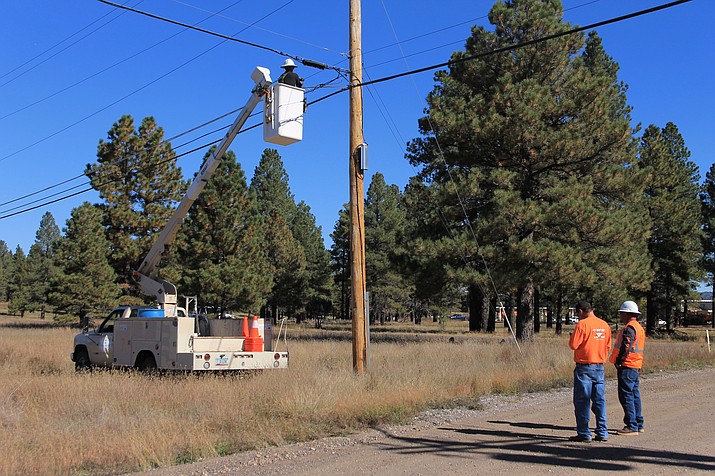 WILLIAMS, Ariz. — Finding high-speed internet is always a challenge in Williams, but Telcom West is hoping to change that by bringing fiber optics to the community

By replacing the outdated TV cable system, the company plans to bring faster, more reliable internet to residents and businesses.

With a team of six, the crew is already pulling up cable and replacing it with fiber optics around the community, and has plans for expansion.

“We want to go all the way out South Road,” said Russell Sutton, one of the leaders of the project. “We want to go out past Lost Canyon (Young Life Camp), all the way north, all the way to the airport. (We) just have to get the hub of the city built to be able to branch out to different areas.”

As for how long installing the new system will take, there is no set time. Getting started hasn’t been easy, as challenges such as COVID-19, logistics and supply chain issues have slowed the project.

Fiber to the home technology is not common in rural areas like Williams, he said.

“You don’t see fiber to home in many areas like this,” Michael Pettit said, a partner on the project. “I’ve been doing it for nine years now and you see it in bigger cities, big businesses, stuff like that, but you don’t see fiber going to home, and with fiber going to home (in Williams) that’s definitely making a push for something big. This will put us five years ahead of everybody.”

When asked why other places don’t have this technology, Russell explained that it’s typically because of the expense. However, because of the team’s knowledge and experience, they decided to pursue it, he said.

“The idea was pitched and we were brought in on it,” Jim Felton said, another partner on the project. “We’ve got a lot of abilities, and knowledge, and it was like ‘you know, we can do this.’ Our town is 35 years plus behind the times as far as communication, (as) is a lot of the country.”

Fiber optics are long, thin strands of very pure glass about the diameter of a human hair. They are arranged in bundles called fiber optic cables and use light instead of electricity to carry a signal. The light signals represent data, which is capable of traveling at the speed of light.

Fiber to the home is the installation and use of optical fiber from a central point directly to individual buildings such as residences, apartment buildings and businesses to provide high-speed internet access.

Fiber technology is unique because it can carry massive amounts of information, called bandwidth, over long distances without degradation.

“Nothing’s faster than the speed of light,” Russell said. “There’s no copper, there’s no fiber to copper, it’s fiber to your home.”

In February 2022, Governor Doug Ducey announced the state’s investment of $68.1 million to expand broadband connectivity along Interstate 40 West from Flagstaff to the California border.

“Arizonans, visitors and commerce rely on high-speed internet connectivity for efficiency and safety,” Governor Ducey said at the ADOT North Central District Office. “That’s why we’ve prioritized the expansion of broadband infrastructure in every corner of our state. This critical infrastructure will give more homes fast internet, improve public safety, increase access to education and help more Arizonans get the care they need through telemedicine.”

According to the Arizona Broadband Statewide Middle-Mile Strategic Plan released, I-40 West is a priority corridor for broadband network development to bring connectivity to Coconino, Yavapai and Mohave counties, as well as the underserved communities of Flagstaff, Bellemont, Williams, Ash Fork, Seligman and Kingman.

Telcom West’s project will expand on this, making the fiber optic experience even better.

Some of the benefits of fiber to home not only include faster internet speeds, but also increased reliability and unlimited bandwidth.

Although work continues on the project, anyone interested in becoming a customer can visit telcomwest.com for more information.