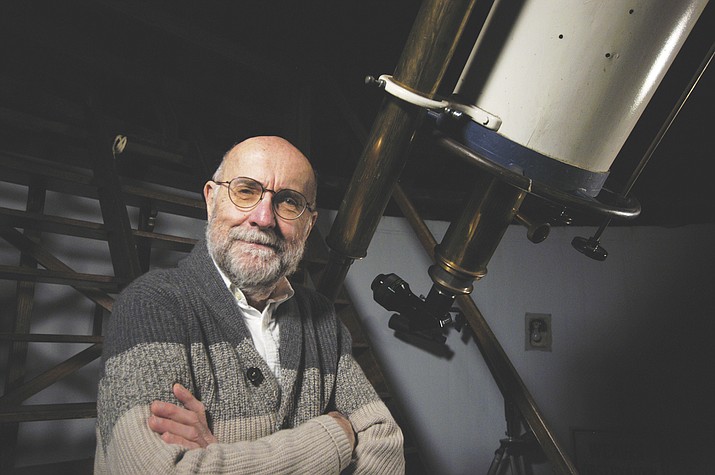 Fleisch will live and work at the historic Verkamp’s artist residence at Grand Canyon National Park from Nov. 21 – Dec. 21 where he will have the opportunity to practice and share his discipline under one of the most pristine night skies.

As professor emeritus of physics at Wittenberg University in Springfield, Fleisch is the recipient of the 2004 Alumni Association Award for Distinguished Teaching, and 2010 Ohio Professor of the Year. He has a bachelor’s degree in physics from Georgetown University, and a master’s and doctorate in space physics and astronomy from Rice University.

During his residency at Grand Canyon National Park, Fleisch anticipates presenting 20 programs, which will include programs on the solar system, stars, galaxies and cosmology, touching on the search for extraterrestrial intelligence, along with daytime solar telescope programs.

Fleisch’s early career was researching stealth technology - trying to make aircraft less reflective to radar. A lot of his work was taking techniques he used in graduate school, studying the Earth’s atmosphere, and applying that to understand how much radar energy objects reflect.

Radar plays an important role in the military but it’s also useful for studying nearby planets and the electromagnetic engineering that goes into it is integral for radio astronomy for revealing the universe, he said.

Fleisch attributes his love of the night sky to looking up from his home in suburban Milwaukee with his first telescope, a $39 Tasco, nearly 60 years ago and pointing it towards Saturn and the moon since they’re bright and easy to find.

“I looked in that eyepiece and saw the rings of Saturn and ran inside trying to gather up my brother, sister and parents to come look,” Fleisch said. “It had no motor so by the time we got out there, Saturn had long since drifted out of the field of view. But it was an epiphany.”

Fleisch said he experiences that same sense of awe when he simply observes Saturn with a new eyepiece, or when he looks through the 15-foot long telescope in the Weaver Observatory at Wittenberg University, where he works as the director.

He vividly remembers the first time he saw the observatory when he was first interviewed for a teaching position at Wittenberg where he eventually taught electromagnetics and space physics.

“As I approached the building I roughly estimated the size of a telescope by looking at the size of the dome and I knew they must have a nice sized telescope in there,” he said. “The place was in fairly bad shape. They hadn’t had an astronomer on campus for a while, so they blew the dust off and opened the door of this almost 100-year-old building and here is this fabulous telescope, and I knew I had made the right decision to wind down my career in industry.”

“People need accommodation,” he said. “When you experience looking at the Grand Canyon or the night sky with lots of stars. This doesn’t match how you thought the world looked. Here in Ohio when I look up at the night sky, I’m lucky to see 20 stars but in the Grand Canyon, you regularly see 4,000 stars. It doesn’t quite fit people’s perception of what a landscape or a night sky looks like. That’s part of becoming more connected with the world and being a little less self-important. It’s called a self-transcendent experience.”

Fleisch said he believes the more people understand the cosmos, the less fears and insecurities they will have.

“It’s been my experience that when people gain understanding of the process of science, they’re less likely to object to well-established scientific conclusions.” Fleisch wrote. “Because they don’t like the consequences, such as the likelihood that the Universe began with the “Big Bang” and will expand forever, or that humans are performing a very dangerous planetary experiment by loading our atmosphere with greenhouse gases.”

Through Fleisch, and other scientists and artists, the Grand Canyon Conservancy’s Astronomer in Residence program aims to inspire visitors to see the values of dark night skies, spread awareness about the threats of light pollution, and explore society’s complex relationships with natural darkness.