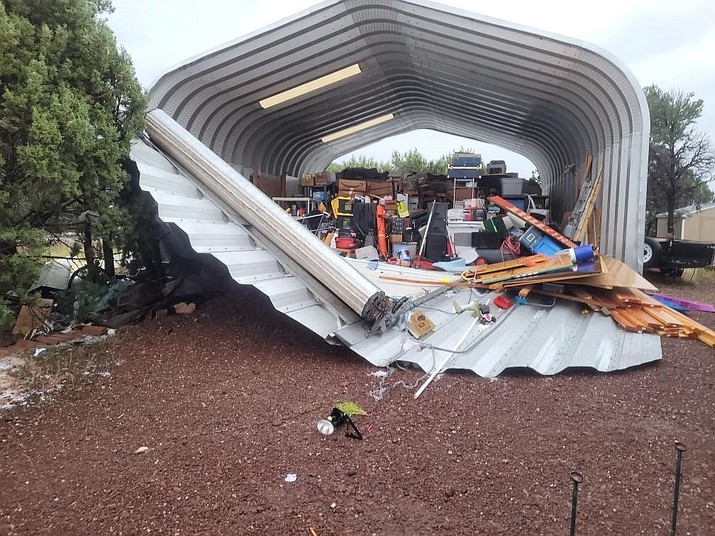 WILLIAMS, Ariz. — Several homes were damaged and power was out after a tornado touched down in the Junipine Estates subdivison north of Williams around 1:30 p.m. Oct. 3.

According to High Country Fire Rescue Chief Robert Trotter, there were no reported injuries, but 15 homes were damaged in the incident, with one home being lifted from its stemwall foundation. Several outlying buildings and RVs also sustained damage.

"The tornado cut about one mile through the area," Trotter said. "You can see where it touched down and then lifted up in several locations."

Later in the afternoon the weather event was confirmed by the National Weather Service in Flagstaff as an EF-1 tornado, with sustained winds between 86 – 110 m.p.h.

The neighborhood has several downed trees and debris was strewn throughout the area, including displaced sheds, trampolines, boats and fences.

Trotter said High Country set up an incident command center in the neighborhood as teams of first responders went house to house looking for missing or injured people.

"It was amazing that no one was injured, nor any pets missing," he said.

Trotter, who lives in the area, was home at the time of the incident.

"If I was in the Midwest my wife and I would have been going to the storm cellar," Trotter said."The winds were unbelievable, I couldn't see 20 feet in front of me."

The storm was accompanied by rain, hail and high winds.

"The rain was horizontal and everything was just a dark gray," he said. "My house was rattling and the trees in our yard were bent over."

The American Red Cross along with Williams Unified School District established a temporary shelter at the district’s administration offices in Williams. Although no one has requested assistance from the shelter, Red Cross staff will remain ready to assist should any affected resident inquire. Case management services are being offered by Coconino County Health & Human Services on behalf of United Way of Northern Arizona and Red Cross to assist with immediate and more long-term needs.

Coconino County’s Public Works department is currently evaluating placement of dumpsters in the neighborhood to assist with debris collection and removal. APS reports that service has been restored to the neighborhood as of Monday night and there are no reports of gas leaks in the area.

Updated information will be provided on the county website at coconino.az.gov and on County social media as it is available.