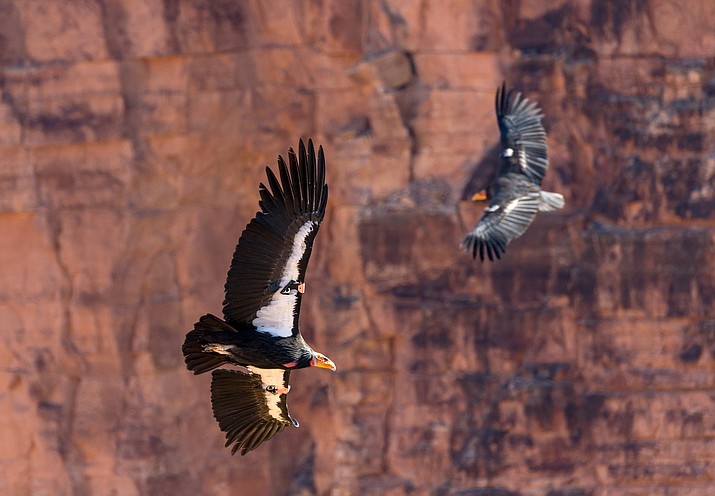 A California condor soars above the canyon walls at an earlier release hosted by the Peregrine Fund, Vermillion Cliffs National Monument, Arizona Game and Fish Department, U.S. Fish and Wildlife Service and other organization. (Photo/Peregrine Fund)

VERMILLION CLIFFS, Ariz. — Thanks to one of the country’s most successful captive breeding programs, five more California condors took to the skies over Arizona’s Vermilion Cliffs National Monument Sept. 24 in celebration of National Public Lands Day.

The Peregrine Fund, which coordinates the release along with several federal land management organizations, said there are now 113 California condors soaring above northern Arizona and southern Utah. This is the 27th year the organization has partnered with the Bureau of Land Management in Utah, Arizona’s Vermilion Cliffs National Monument, Arizona Game and Fish Department, U.S. Fish and Wildlife Service, Grand Canyon and Zion National Parks, Utah Division of Wildlife Resources, and the Kaibab and Dixie National Forests to reintroduce the birds to the wild. For those who missed the event or were not able to attend in person, the release is available for viewing on the Peregrine Fund’s YouTube channel.

The California condor species was on the brink of extinction in the late 1980s — there were just 22 surviving condors worldwide and only one remained in the wild. The U.S. Fish and Wildlife Service, along with other state and federal agencies, established the California Condor Recovery Program to save the species. According to the USFWS, the goal was to create and maintain at least two self-sustaining wild populations, with a third breeding population to be retained in captivity.

The program has been one of the most successful captive breeding programs to date, with three active release sites in California, Arizona and Baja, Mexico. The number of breeding pairs continues to climb, with several wild-fledged chicks hatching each year.

Although the released condors have been born and raised in captivity, they mostly rely on strong instincts to acclimate into the wild.

“We are just going to monitor them, try and stay as hands off as we can and watch that development,” said Tim Hauck, Condor Reintroduction Program director for The Peregrine Fund.

The large birds aren’t just thrown into the wild without any help at all, however. Hauck said the large birds of prey do receive some assistance.

Because 25 percent of all released condor fatalities are due to predation from coyotes or golden eagles, biologists occasionally haze young condors when they choose an exposed area to roost for the night.

“If a bird’s life is at risk, we would absolutely step in if necessary,” he said.

Hauck said most condor fatalities occur because of lead poisoning from lead bullets in consumed carcasses, but hunters are taking action. 90 percent of hunters throughout Arizona and Utah participate in non-lead initiatives, which has led to a decrease in fatalities.

While the breed-and-release phases of the program have been successful, the California condor species remains critically endangered.

The focus has now shifted to ensuring the wild populations remain self-sustaining with at least 15 breeding pairs.

Federal and state agencies, as well as private partners such as the Peregrine Fund, continue to try to mitigate threats to the species, including habitat encroachment and lead ammunition.

Because of these efforts, the total world population of California condors has climbed to more than 500 individuals with over half of that number living and flourishing in the wild.

To see these birds in the wild, most biologists and volunteers recommend visiting Navajo Bridge near Lee’s Ferry.