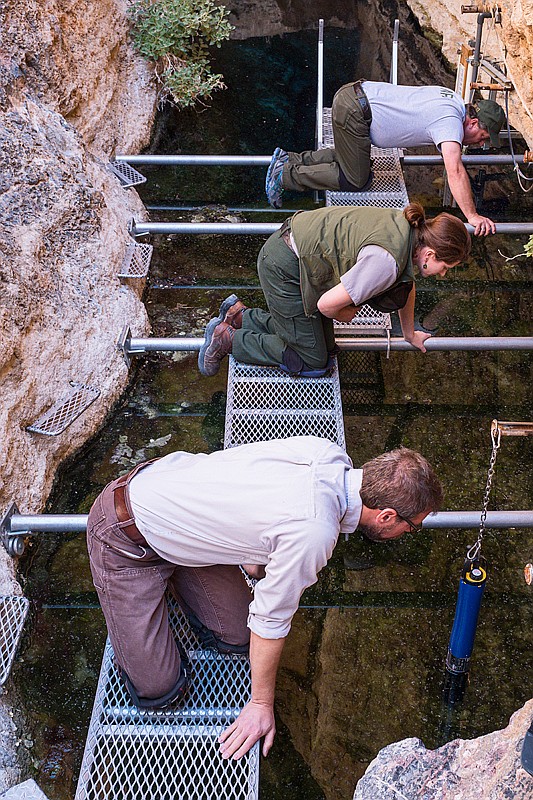 AMARGOSA VALLEY, Nevada – Good news has been reported regarding one of the most endangered fish species in the world.

Officials announced the The Devils Hole pupfish, a critically endangered fish that lives in the upper 80 feet of a deep water-filled cavern in a detached unit of Death Valley National Park, has bumped its population to 263, the highest population observed in the past 19 years.

This count came on the heels of a magnitude 7.6 earthquake in Mexico that caused 4-foot waves in Devils Hole on Sept 19.

Pupfish are counted using both scuba and surface visual counters. Sloshing waves removed algae, invertebrates, and other organic matter from a shallow shelf that pupfish use to forage and spawn. This made it easier for biologists to see and count pupfish from the surface. Scientists using scuba also counted pupfish at greater depths.

It’s the elusive history and mysterious character of the Devils Hole pupfish that is particularly awe-inspiring, keeping biologists and fish enthusiasts persistent of the population’s status.

Devils Hole pupfish (Cyprinodon diabolis) live in the upper 80 feet of a deep water-filled cavern and sun-lit shallow shelf at the cavern’s entrance, making this the smallest range of any vertebrate species on the planet.

Population size is estimated by counting fish throughout its habitat, with standard counting protocols. Scientists scuba dive to count fish in the cavern, starting at depths below 100 feet.

Simultaneously, other scientists count fish on the shallow shelf at the waters’ surface. The final count includes both surface and underwater fish.

Before the 1990s, the population was around 400-500 pupfish in the fall. However, pupfish numbers have been especially low during the last two decades, averaging only 90 fish.

A return to higher numbers of pupfish this time of year could signal important changes in the ecosystem.