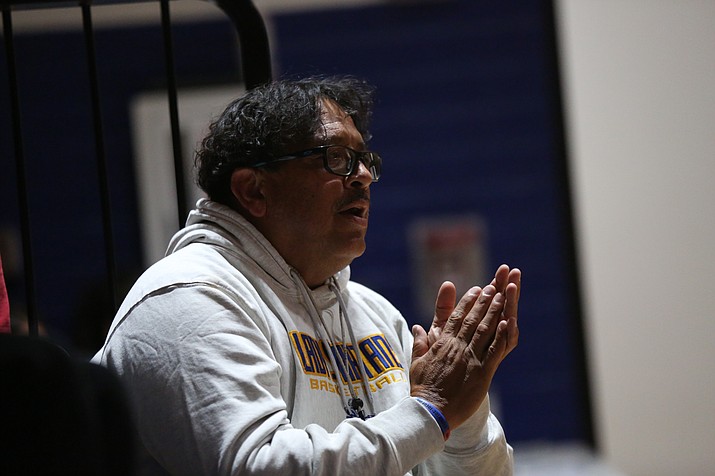 Sonny Martin has been teaching and coaching in Ash Fork for 21 years. (Marilyn R. Sheldon/WGCN)

He's the high school math teacher and serve’s as the school’s athletic director. He has coached almost every sport in Ash Fork, including volleyball, basketball and baseball for the Spartans. In 2014, he was named "Teacher of the Year," for the state of Arizona.

Martin has been a full-time classroom teacher for 35 years. This is his 21st year teaching at Ash Fork, beginning in Ash Fork in 2000. However, he’s spent his whole life working with children. He began coaching in 1985.

Other than a one-year stint teaching at Mayer, he's been at Ash Fork his entire career.

His daily regimen is rigorous. On school days, he's up at 2:45. His first stop of the day is the gym to lift weights from 3:30 to 5 a.m. Then he heads home to make breakfast for himself and his three dogs, then goes back to the school by 6:30 a.m. to prepare for his teaching day.

After a full day of teaching classes, he goes to the gym, where he coaches various Ash Fork High School sports teams until about 7 p.m. On basketball game days, the last game usually starts at 7 p.m. Some of the outlying schools are a several hour bus ride each way. Many times, the team doesn't arrive home until after midnight. Martin also cooks dinner for the team for the long bus rides.

Besides teaching full time and coaching, he also serves as the school's athletic director.

In his spare time, he can be found leading the soccer team, while they cheer for the girls' volleyball team.

This year, he's coaching all four of the high school's basketball teams, boys' soccer, baseball, and possibly softball in the spring.

Along with being a full-time teacher and coach, Martin is also the junior and senior class sponsor. (Marilyn R. Sheldon/WGCN)

He's also the junior and senior class sponsor, and does a slide show for them before they graduate. This spring he'll likely accompany the graduating seniors on their class trip to Hawaii. He's helped the seniors with their fund raising efforts for the trip. At this point, they've raised about half of the antic costs, $7,600.

Why does he do it?

"I enjoy being with the kids," he said.

Is it worth it?

"I'd do it all over again" he said. "I enjoy being with the kids. I like coaching. I've had numerous kids come up to me 10 years after they graduate, thanking me for being disciplined, and teaching them discipline. They say it's made them better people."

What does he do in his spare time? Martin works in his yard, spends time with his three dogs, and his latest passion ... skydiving.