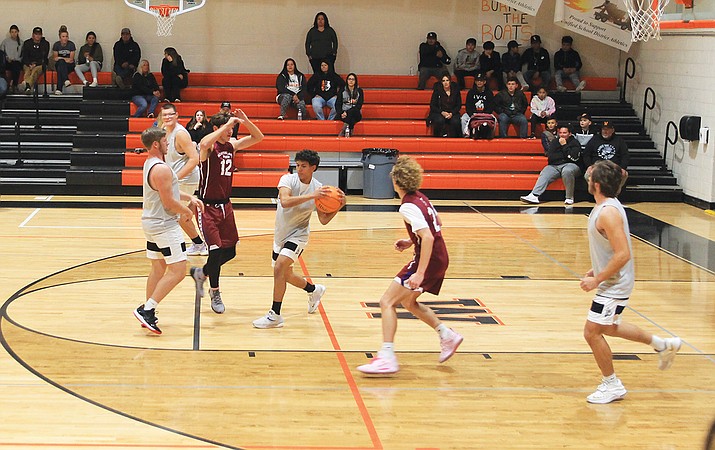 Vikings steal the ball and make their way down court at the Williams vs Ash Fork Scrimmage last week. (Summer Serino/WGCN)

WILLIAMS, Ariz. — Basketball season has begun at Williams High School. Last season, the Vikings basketball record was 15-11 overall, and 8-6 in the region. Although the team had a winning season, they missed making the state playoffs.

Although the varsity roster has not been finalized, Coach Phillip Echeverria said he has a solid 10-11 players he’s looking to place on the team.

“The biggest challenge is having them come together as one unit,” Echeverria said. “Everybody will need to contribute. The less they worry about whose contributing day in and day out the better we’ll be.”

Although the team offered a summer program, only about seven to nine kids participated. In the previous year, about 20 students were involved.

“I tell my kids each and every year that if you don’t have the goal to win the state championship then there’s no reason to be out here. We try to set that goal and we want to achieve that goal, so we’re going to do it one game at a time, and give our best effort and hopefully improve,” he said.

Echeverria expects the team’s strengths to be speed and shooting. He suspects size will be a weakness.

Since many of the players were in the state playoffs for football, the team is having to work hard to make up practice time.

“I’m not too worried about being behind,” Echeverria said. “We want to add things and show improvement throughout the year.”

The team has already faced Ash Fork, Mohave Accelerated and Basis, and is gearing up for the Route 66 Classic Tournament Dec. 1 -3.