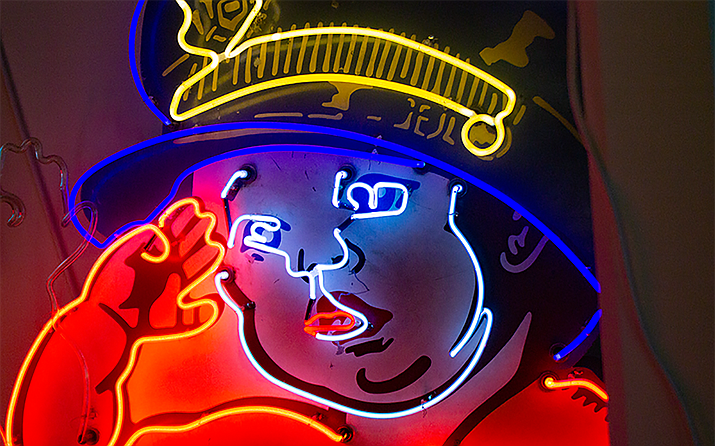 A baby salutes in this neon sign advertising International Warbabies, a boutique on LA's trendy Melrose Avenue in the early 1980s. Photo taken Sept. 16 at the Museum of Neon Art in Glendale, California. (Photo by Emeril Gordon/Cronkite News)

GLENDALE, Calif. – In booming Western cities of the mid-20th century, streets were bathed in the glow of neon: soft at times, garish at others but always mesmerizing.

As Southern California drew flocks of Americans to its post-war promise of sunshine, hotrods and surfing, ever-more elaborate neon signs reinforced the notion that the sky’s the limit.

Today, neon signs represent a whiff of a bygone era, iridescent tubes of dust-caked glass that illuminated dreams as well as advertise products and services, many of them from businesses that are now long gone.

The goal now is to preserve those dreams.

In automobile-centric cities where neon was an enduring part of their early identity, some of the best of those old signs have been taken into museums long after the businesses and buildings they once graced have disappeared from the urban landscape.

One is the Museum of Neon Art, or MONA, in Glendale, California, which restores and showcases some of the most significant neon signs of vintage Southern California.

Others include the Neon Museum in Las Vegas, with its collection of famous hotel-casino signs, and the Casa Grande Neon Sign Park south of Phoenix, which features 14 historic signs from central Arizona that have been restored.

For some people, neon signs are worth preserving because of the artistry involved. For others, it’s pure nostalgia.

Neon gives people “the ability to time travel in some ways. It’s very much indicative of the era,” said Adrian Scott Fine, senior director of advocacy at the LA Conservancy, an organization devoted to celebrating and preserving Los Angeles’ significant buildings.

“It’s part of your memory, childhood – your connection,” he said.

In addition to showcasing the history of the cities where memorable signs brightened the sky for decades, the museums feature modern neon art – showing that tube bending is not a lost skill.

“I think that in order for the medium to survive, it has to survive in our time,” said Corrie Siegel, MONA’s museum’s executive director.

The museum, founded in 1981, moved several times before landing in Glendale. It has collected 183 neon signs that once adorned coffee shops and auto dealers, motels and liquor stores.

Some vintage signs are dreadfully serious, like one for medical treatment called Asthma Vapineze. Many are playful, like the one from Paramount Pest Control, in which a neon “Doc Kilzum” dispatches rodents above the slogan “His patients all die.”

Some are more modern. A 1983 sign for International Warbabies, a fashion boutique once situated on hip Melrose Avenue in Los Angeles, shows an infant in a military cap saluting a descending paratrooper.

Some signs are rather mundane, but the museum collected them because they’re neighborhood landmarks. For instance, the vivid red Circus of Books sign was significant to locals and the LGBTQIA+ community in the Silver Lake section of Los Angeles. It closed its doors in 2016.

“To finally have in a museum this sign that spoke to this place of solace for many young men who were so stigmatized during the AIDS crisis, it was so moving,” Siegel said.

At least one sign in the museum’s collection – advertising a Mexican restaurant and featuring a pair of Latin dancers – has received an update.

Initially, one dancer had blonde hair because from a distance, black hair wouldn’t be visible.

“So it speaks to kind of legibility and the problem of legibility,” Siegel said. “But when we restored it, we decided to make it more culturally appropriate.”

Siegel’s love affair with neon began when she was a kid and visited her friend Katrina, who lived in Echo Park. She knew they were getting close when she spotted a liquor store neon sign depicting a cabin with a tall, tilted chimney and puffy white clouds that flashed bright colors in sequence.

“Whenever we were turning the corner and we saw this sign,” Siegel said, “I knew we were at Katrina’s house, so it had this very sentimental thing. I would always go out of my way to drive past the sign.”

In the 1920s, Los Angeles’ up and coming modern businesses, mainly those in the automobile, motel, diner, radio and entertainment industries, couldn’t get enough of neon, which had been introduced to the world at the 1910 Paris Auto Show.

Some of those signs were such a sensation that they caused traffic jams as people stopped to gawk at the bedazzling lights. Neon lights began to signify the California cool culture: cigarette smoke wafting over the red leather booths of cocktail lounges, jazz playing in the background.

Every neon sign is handcrafted by the artist, Siegel said.

“Their hands were held by someone from the previous generation teaching them these skills, and it’s this line of continuation from the 1920s to present day,” she said.

To make a neon sign, artists carefully twist glass tubes over flame, heating them until soft enough to bend against a pattern. The tubes are filled with noble gases then an electric charge is sent through the tubes.

Neon sign artists have to work from the center. If a car dealer wanted the word Pontiac, the artist would start with the “t” and work out from there.

MONA visitors can take a class where they can design and build their neon signs and show their creativity with the help of skilled neon artists, according to the museum’s website.

MONA also offers visitors neon night walks and a neon cruise where guests can explore the signs from downtown Los Angeles and Hollywood.

“People love the signs in many cases because they are so unique, but they are also very much connected to their past,” said Fine of the LA Conservancy.