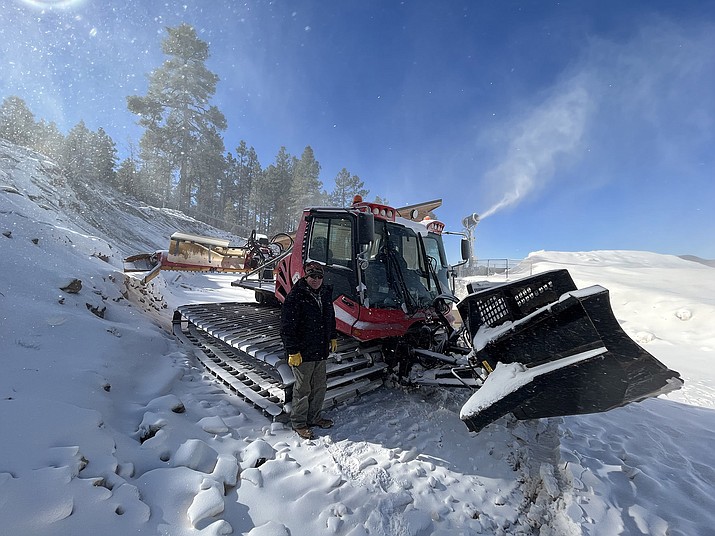 WILLIAMS, Ariz. — As temperatures in Williams have dropped, Canyon Coaster Adventure Park is embracing the cold as it shifts its operation to a winter wonderland.

Using snow guns, the park has turned Williams into the snow destination place to be, with a new winter tubing hill that includes a sweet ride back to the top. 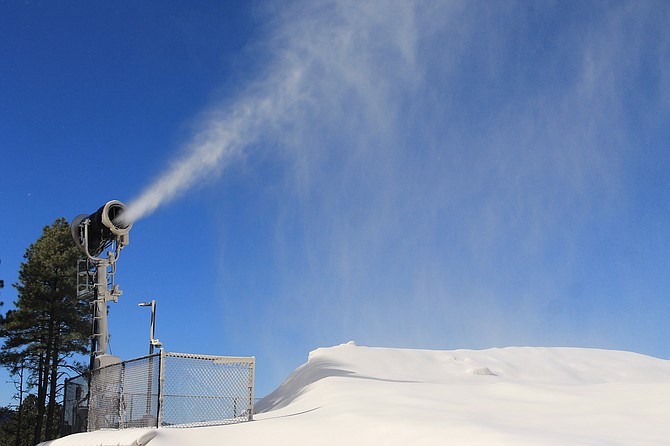 Several powerful snow guns are working overtime to pack the slopes with at least three feet of snow. The machines work by combining compressed air and water. The mixture is shot into the atmosphere and then freezes, making snow. At the base, the 500-square-foot pump house holds a vertical turbine pump and a control system for snow making. A snow cat is used to maintain lanes and snow conditions. 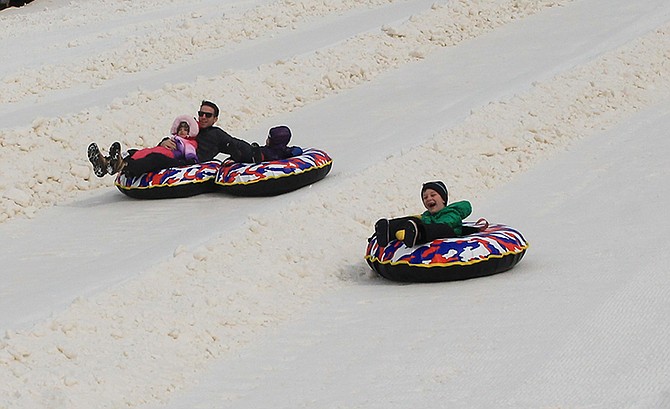 The Oakes family from Gilbert, Arizona are the first to try the snow tubing hill out Nov. 18. (Summer Serino/WGCN)

The park has 480 brand new tubes ready for use. Riders are issued a tube and transported up the hill via a “magic carpet lift system.” Although the park is opening with just a few snow tubing lanes open, they plan to eventually have eight to ten lanes this season.

Only paid customers will be allowed to go up the tube hill. Families may watch at the bottom or can sit inside and watch the 23 large screen televisions, a few of which will broadcast the live feeds of the tube hill and canyon coaster action. The park will be installing four to five on sight cameras covering the tube hill. Other TVs will be covering sports.

Also inside is the Canyon Coaster Bar and Grill. The grab and go grill has a selection of burgers, pizza, sandwiches, salads and more. The bar is a full bar. Five fire pits around the park add for additional comfort and ambiance.

“We’re trying to provide a fun environment. We’re trying to bring something here that’s pretty unique. Mom and dad can sit inside, maybe if they want a beer or cocktail or a soda and to eat while the kids are up playing,” Follett said. “(There’s) 23 large screen TVs, our coaster’s still available and we still plan on doing some expansions.”

The park is working on adding mini golf next, after that, plans of a ropes course. Follett explains there will always be plans of more expansion. But for now, the park is putting all their focus into the new snow tubing hill and having a great first winter season.

During the busy summer season, the 92 spot Canyon Coaster parking lot would regularly fill up. The city has given the park permission to use the lot near Locus St. on on east Route 66 for additional parking. It has already been graded and a base has been put down. Once ready, the lot will be open for public parking and will offer about 80 extra parking spots, basically doubling the Canyon Coaster’s parking capacity. 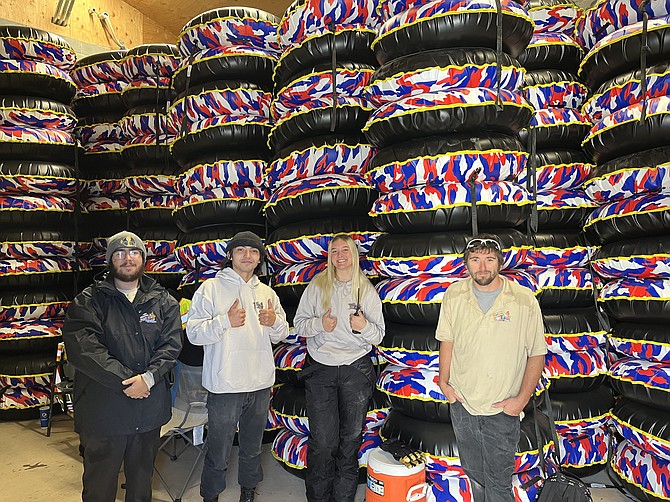 Along with offering adventure, food and a good time, the adventure park prides themselves in providing a safe snow environment where patrons can play.

“Our biggest concern is safety. We’re making sure our guests and are staff are safe,” said Tammy Lepper, operations manager.

Several precautions are in place to ensure a safe experience at the adventure park, including a completely smooth hill for tubing. No rocks, trees or busy streets to slide into.

“What we’re going to offer is a safe environment to play in the snow. That’s the number one thing,” Follett said.

The adventure park is aware of the recent concerns some Williams residents have had: water usage and snowfall landing on East and West Route 66.

With permission from the city, the park has been sourcing water from Kaibab Lake. The adventure park uses no greater volume of water in the winter than any of the city’s hotels, the city said.

As for the snow landing on the streets, the adventure park has already put solutions into place.

“We will manage it. We’re working real well on it. It’s being cindered,” Follett said.

When the problem first occurred, the park worked with the city to cinder the roads. To prevent this issue going forward, Leppert rotated the snow machines to change the direction of the snowfall.

“Originally when you saw a lot of snow out there, it was shooting straight out (onto the street). Now our guns are pointing uphill or downhill as best as we can to redirect the direction of the snow…We’re doing everything we can to keep it to a minimum,” he said.

Since redirecting the machines, there has been significantly less overspray on the roads. New street signs and flashing lights will be added as an extra precautionary warning to alert drivers of possible overspray. The park has ordered their own cinder machine and has a plow should they need to take action on the streets.

“We want to be good neighbors,” Follett said. “We’re just trying to do what we can do to have everyone come and have fun and enjoy.

Visitors should dress accordingly and be prepared for below freezing temperatures. Gloves, mittens, beanies and sweatshirts will be available for sale.

The park is expecting to have a busy season and anticipates there will be need for more staffing. Employment opportunities may include positions in food service, the tube hill, the coaster, tickets, kiosk and retail. Those interested should call and apply. 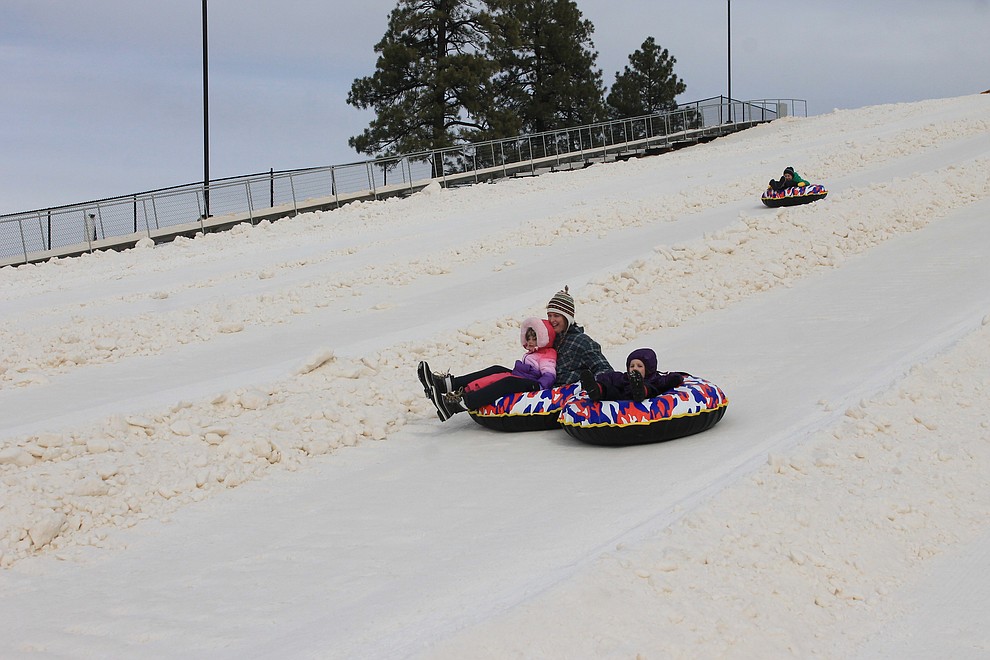 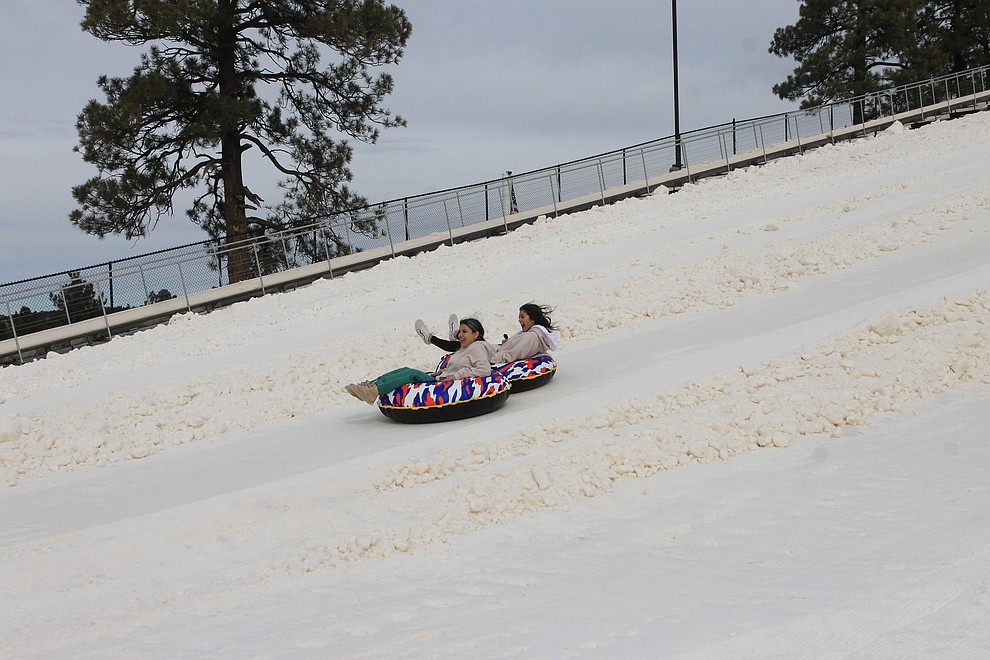 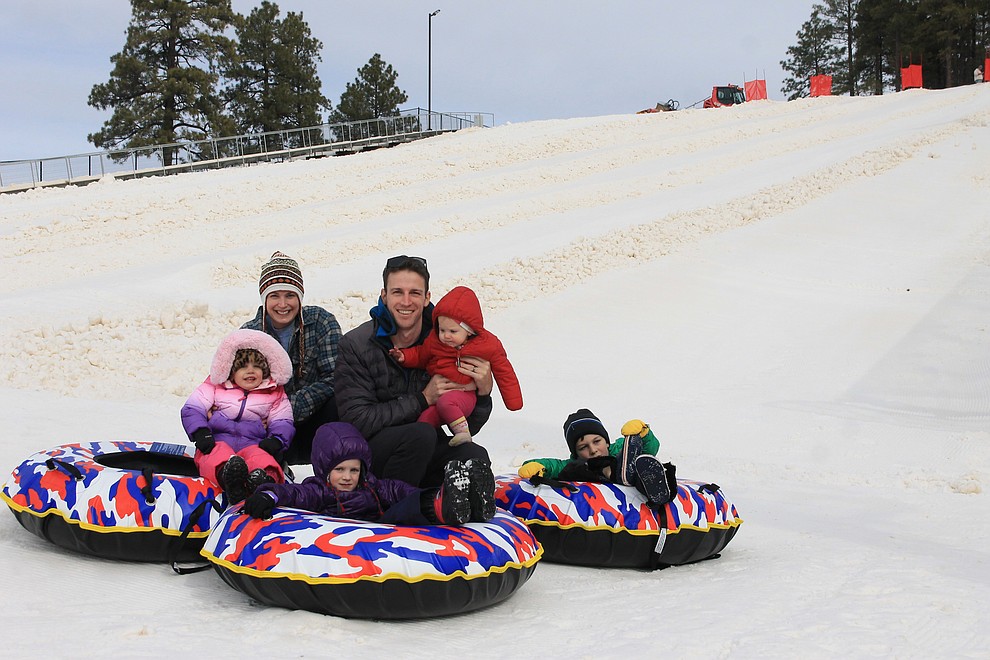 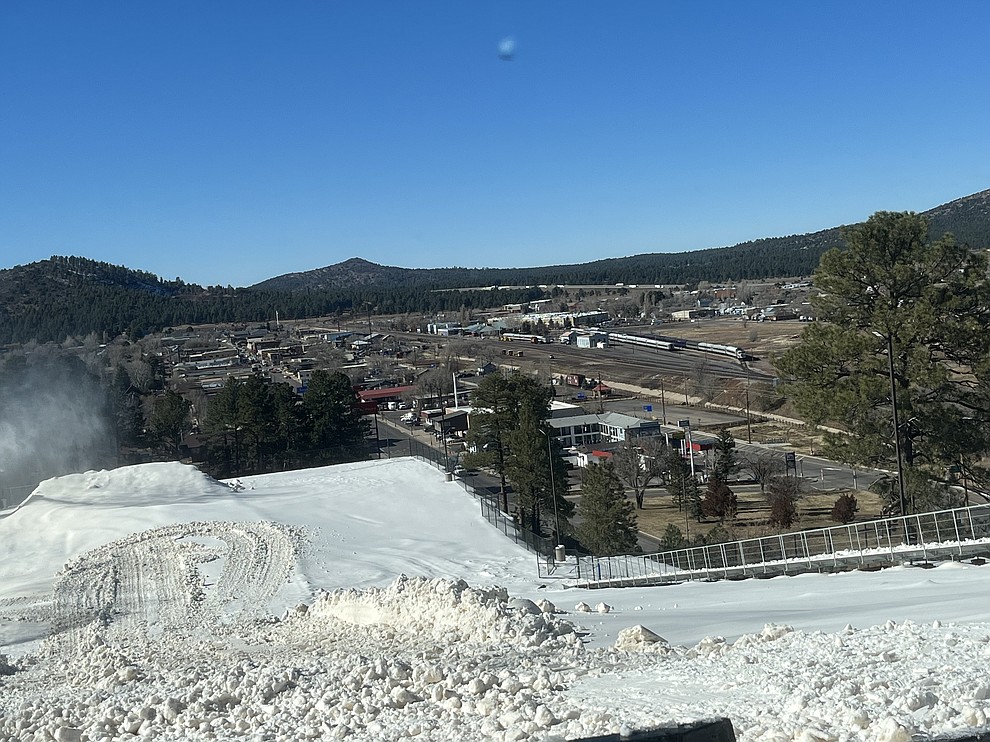 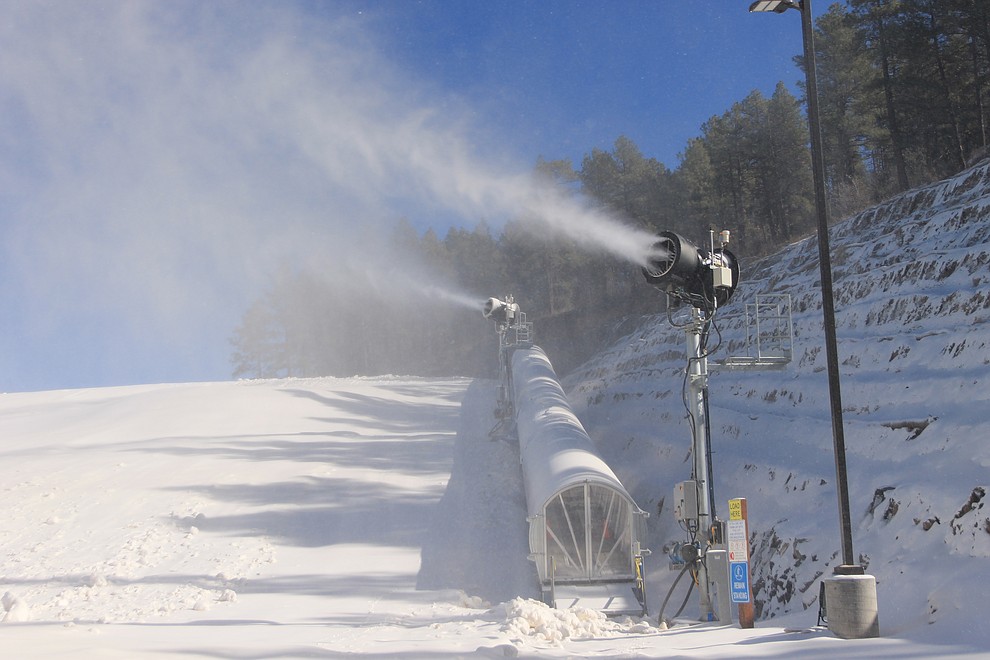 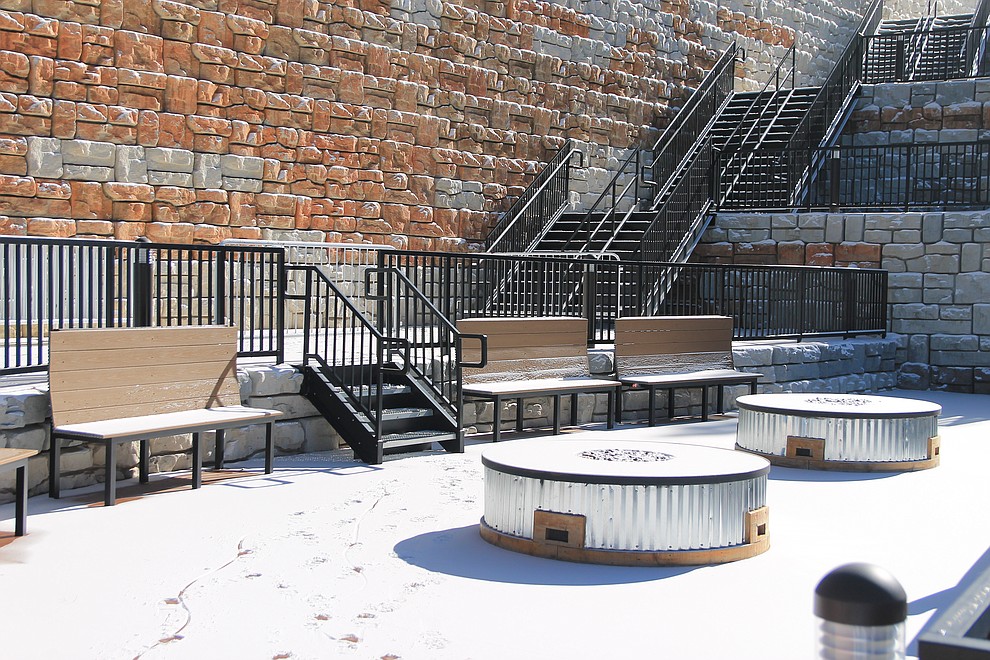 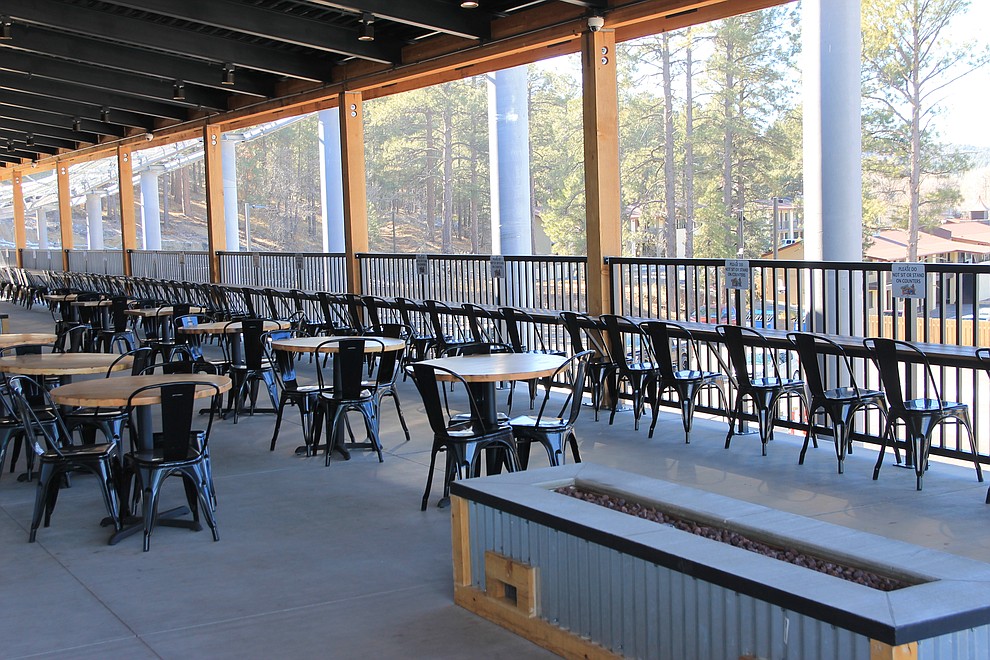 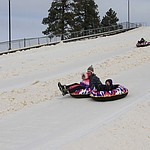 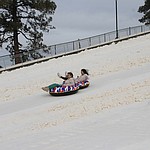 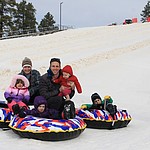 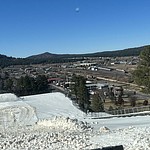 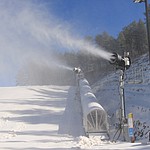 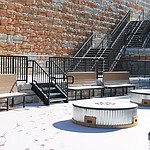 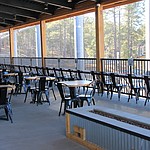