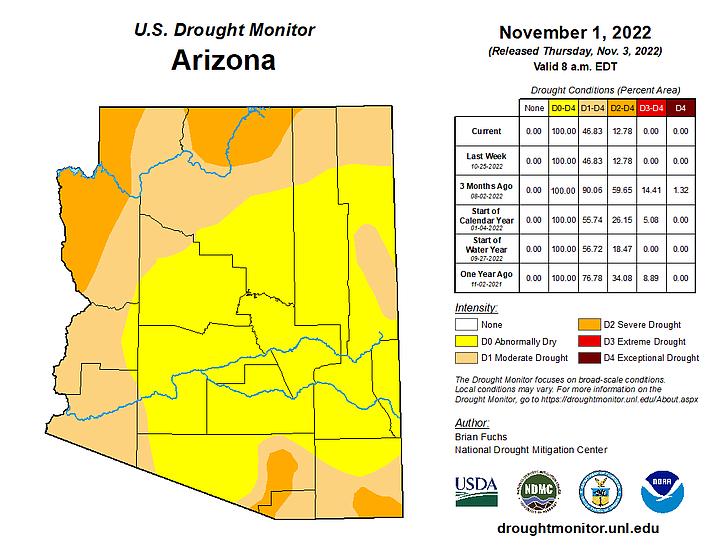 As of Nov. 1, much of central Arizona is classified as “abnormally dry” by the Arizona Department of Water Resources (ADWR). Northern Arizona is considered to be under “moderate drought” with far northern and western portions of the state considered severe. (Graphic/ADWR)

FLAGSTAFF, Ariz. — The Southwest may be headed for warmer-than-average temperatures this year, according to predictions by the National Oceanic and Atmospheric Administration (NOAA).

The weather organization’s Climate Prediction Center released its winter outlook in late October, stating that the La Niña weather pattern will return for the third consecutive winter, driving warmer-than-average temperatures for the Southwest and along the Gulf Coast and eastern seaboard.

“The hardworking forecasters at NOAA’s Climate Prediction Center produce timely and accurate seasonal outlooks and short-term forecasts year-round,” said Michael Farrar, Ph.D., director of the National Centers for Environmental Prediction. “NOAA’s new supercomputers are enabling us to develop even better, more detailed forecast capabilities, which we’ll be rolling out in the coming years.”

NOAA forecasters, in collaboration with the National Integrated Drought Information System (NIDIS), continue to monitor extreme, ongoing drought conditions that have persisted in the Western U.S. since late 2020, as well as parts of the central U.S. where historic low-water conditions are currently present.

“Drought conditions are now present across approximately 59% of the country, but parts of the Western U.S and southern Great Plains will continue to be the hardest hit this winter,” said Jon Gottschalck, chief, Operational Prediction Branch, NOAA’s Climate Prediction Center. “With the La Niña climate pattern still in place, drought conditions may also expand to the Gulf Coast.”