Vikings one win from championship after defeating Lobos 56-38 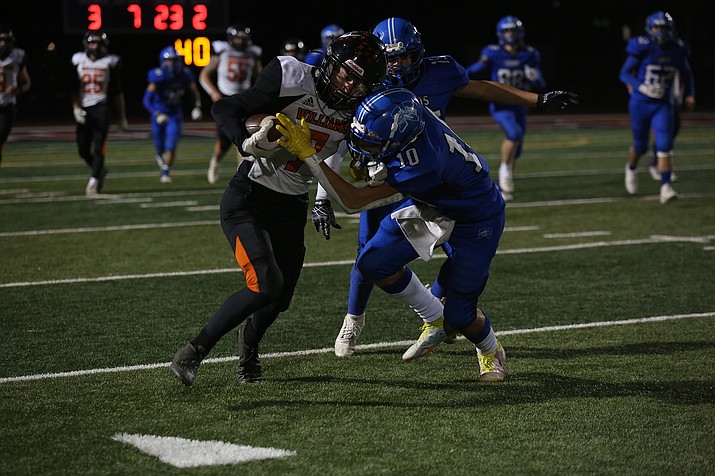 The Williams Vikings defeated the Hayden Lobos 56-38 in the semifinals of the 1A State tournament Nov. 4 (Marilyn R. Sheldon/WGCN)

SCOTTSDALE, Ariz. — “This is a fun time to be a Viking,” said Jeff Brownlee, head football coach for Williams High School, after his team’s win last Friday.

WHS had just rolled over the Hayden Lobos, 56-38, in a 1A state semi-final 8-Man football game, at Coronado High School in Scottsdale.

Things started slowly for the Vikings. At the end of the first quarter, they trailed the Lobos 16-0.

WHS’ offense went to work. A Danny Siegfried to Kevin Nunez pass gave WHS a 22-16 lead at halftime. Early in the third quarter, Hayden took back the lead. Williams countered, and never trailed after that.

Siegfried had a solid performance at quarterback. He threw 23 passes, with 16 completions for 197 yards, two touchdowns, and no interceptions. Gabe Lowell led the receivers with five catches for 108 yards. Nunez hauled in three passes for 36 yards, Raymond Gonzalez pulled down three passes for 22 yards, and Drew Logan caught five passes for 31 yards.

On the ground, WHS’ leading rusher, Logan, carried the ball 30 times for 157 yards.

“Our offense executed very well,” Brownlee said. “We had a good mix of run and pass.”

“We have a lot of resilence,” Brownlee said. “We believe in ourselves and know we can win tough games. Championships are won in large part on the defensive side, and our defense has played outstanding football. We bend, but we never break.”

“I think the refs called a good game both ways,” Brownlee said.

The 1A State Championship contest between Mogollon and WHS is this coming Saturday, Nov. 12, at Coronado High School in Scottsdale. Tickets must be prepurchased through gofan.co. Kickoff is set for 6 p.m.