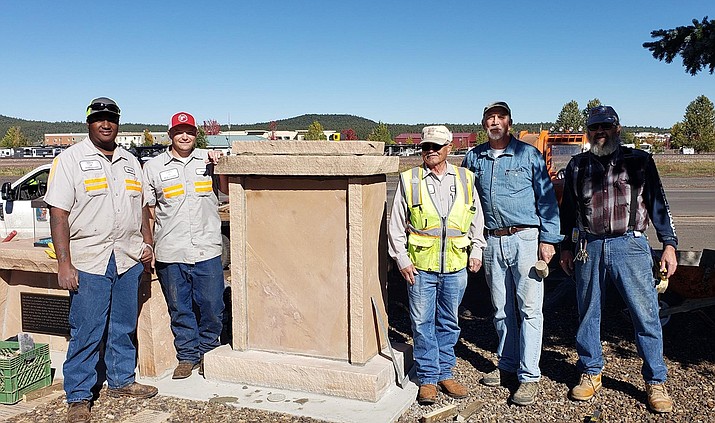 City crews and other volunteers work on the new Medal of Honor memorial at Monument Park. Fundraising and work has continued for over 10 years on the various memorials at the park. (Judy Martinez/WGCN)

WILLIAMS, Ariz. — The city of Williams is recognizing the efforts of the numerous volunteers who have spent more than a decade establishing Monument Park as a tribute to the veterans in the community.

On Nov. 11, the community is invited to participate in a special Veterans Day event at the park.

Monument Park has a long history, with conception beginning in the 1970s when fundraising efforts began for the Bill Williams statue on the east end of what is now the established park.

Larry McFarland, the former parks and recreation director, worked with city crews and volunteers to secure the empty lot that had been used as part of the weigh station.

In 1980 the area was formally dedicated as Monument Park.

"It took a handful of guys to put that whole thing together," said John Holst, a veteran and volunteer.

In 2010, fundraising began for Williams Own Veterans Memorial. In 2013, the park held a dedication with the unveiling of a sculpture by Neil Logan.

Volunteers and city crews work on the Medal of Honor memorial at Monument Park in Williams. (Judy Martinez/WGCN)

Old Trails donated block, concrete and steel for the monument statue and plaque foundations. Holst and Eddie Aguilar laid the statue base. David Reyes Construction did the rock work. David Mechtly Concrete donated the installation of custom sidewalks in the monument area prior to the monument's completion.

"As it got close, we didn't have a real location for it, so Cordova Post 13 took over the challenge for the layout and placement," Holst said.

A brick sponsorship program was undertaken to raise funds for the base of the statue.

"A KIA monument was also built in front of that," he said.

In 2017, the community gathered for a dedication for the USS Arizona monument.

"This was after the U.S. Navy and organizers in Honolulu allowed us to have a piece of that," said Rodger Ely, another veteran and orgranizer on the project.

The latest project is now underway, which is a Medal of Honor monument.

The community of Williams has one Medal of Honor recipient, Frederick Platten, who is being recognized.

Frederick Platten was born at Turlock, Ireland in 1855 and immigrated to this country with his parents. As has been the way of many who arrived on our shores, he joined the Army as soon as he came of age. While serving as a sergeant with Company H, 6th U.S. Cavalry in the Indian Wars, he demonstrated his courage and fortitude when confronted by a difficult and dangerous situation.

At Sappa Creek, Kansas on April 23, 1875, Sergeant Platten with six other men waded in mud and water up the creek to a position directly behind an entrenched Cheyenne position, who were using natural bank pits to good advantage against the main column. This surprise attack from the enemy rear broke their resistance.

Cheyenne warriors had ambushed the cavalry patrol and were getting the best of the troopers until Sergeant Platten took the initiative and caught them between opposing fire that routed the Indian attackers. Not included in the citation but in other records it is noted that at that action he also rescued a fallen comrade.

Platten’s service then moved to the Southwest where he participated in the campaigns against the Apache. His last engagement occurred about forty miles south of Winslow where the opposing forces met in the forest and fought it out from tree to tree along the rim of Chevelon Canyon.

After this battle he retired to civilian life in Arizona and New Mexico living at Payson, Prescott and Gallup. But his military career had not yet come to an end. In 1898 he returned to the colors and served in Cuba during the Spanish American War.

Upon his second honorable discharge in 1899, as a First Sergeant, he came to live in Williams where he served 16 years as a U.S. Forest Service ranger. Platten lived at his Davenport Lake ranch until he passed away in 1939 at the age of 84.

His neighbors and comrades saluted him at services conducted by the Odd Fellows lodge at the Masonic Temple. After the ritual an American Legion Cordova Post color guard escorted the funeral procession to the cemetery for graveside services. A eulogy extolled his service to country and recognized his Medal of Honor and the firing squad from Cordova Post presented a final salute.

The community of Williams is invited to the Monument Park Veterans Day event on Nov. 11 at 11 a.m.

The park is located on the west end of East Route 66 in Williams.