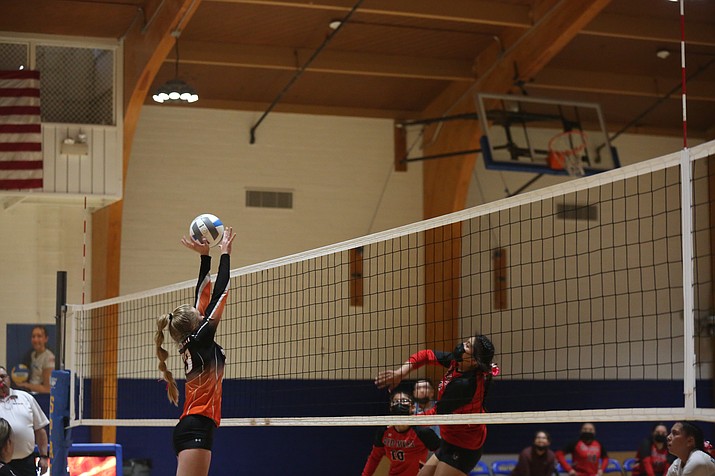 Kai Mortensen blocks a ball at the net at the 1A Super Regional Oct. 29. (Marilyn R. Sheldon/WGCN)

WILLIAMS, Ariz. — It was oh, so close. But, in the end, the Rock Point girls’ volleyball team emerged victorious over the Williams Lady Vikings in 1A Super Regional action Oct. 29.

“We did play well in the third game,” Coach Connie Stevens said. “We were evenly matched. We just had too many mental errors, and didn’t execute as well as Rock Point.”

Rock Point’s offense was led by Arianne Begay, a six-foot outside and middle hitter. The senior dominated the middle and scored on her hard-hit cross court and down-the-line kills.

“We have no excuses,” Stevens said. “Rock Point came to win. We had 59 kills, which is a good number, but too many of our hits were soft. We were too loose, and complacent. We were hitting balls to Rock Point players, instead of hitting the alleys or seams.”

Shaelee Echevveria led Williams with 23 kills. Kai Mortensen had 11 kills, and Kyleigh Amos had 10 kills out of 18 sets.

“I was pleased with Kyleigh’s hitting percentage,” Stevens said. “We have to spot serve better. We’d serve right to a Rock Point player, and they’d bump, set and kill. We gave up way too many free balls, and they just picked them up. Rock Point capitalized on our mistakes.”

“We have to work on our serve placement,” Stevens said.

Both Rock Point and Williams advanced to the state championship tournament rounds. Williams (17-1) will host the Ray Bearcats (11-5) Nov. 1, at 6 p.m. The winner will advance to the quarterfinals, held at Coronado High School in Scottsdale on Nov. 4.

Winners will advance to the semifinal round, also held on Nov. 4. The 1A championship game will take place Nov. 5 at 4 p.m.

Ash Fork Lady Spartans posted a loss to the St. Michael Cardinals at the Super Regional 1A volleyball tournament.

Ash Fork advanced to the state tournament, and played a match at Cicero Preparatory Academy, Nov. 1 at 6 p.m.