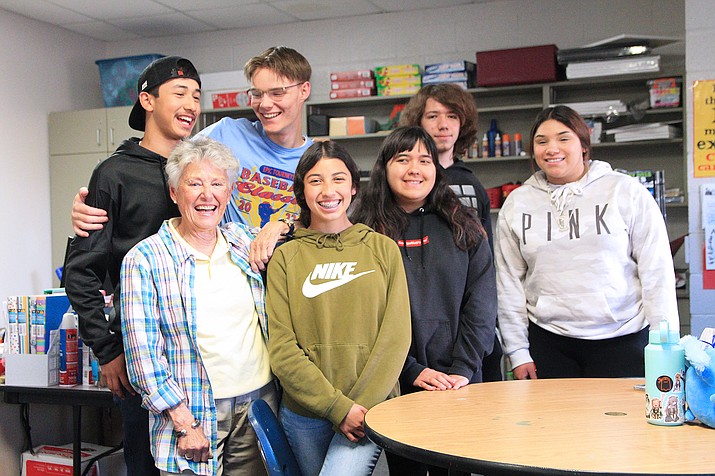 Karen Nelsen is a self-proclaimed beach bum, but she also has a knack for teaching and influencing the lives of young people.

Originally from Buffalo, New York, she grew up in the San Gabriel Valley in Pasadena, California. She was one of two children and her father was a professional baseball player.

As an adult, Nelsen spent 30 years in outside sales in southern California, Arizona and Las Vegas.

“I sold high school class rings, supplemental health benefits to teachers, wedding and engagement rings, industrial chemicals — there was a whole bunch of things,” she said.

When she was 55, Nelsen said she went through a mid-life crisis and it was then she decided to become a teacher.

“I did not become a teacher until later in life,” she said.

Her first experience teaching was in 1997 when she taught first grade for four years in Paramount, California.

She then moved to Norco, California and taught middle school at Realto Middle School. Later, she taught second and fourth grade in Fontana, California. At that time, she was offered early retirement and decided to move to Chino Valley, Arizona, where she continued her teaching career at Chino Valley High School and Heritage Middle School.

She was then offered a full-time position at AFUSD teaching seventh grade teen leadership and high school art. She also oversees study hall at the high school. She is now in her third year as a teacher at Ash Fork.

For Nelsen, teaching at Ash Fork has been a bright spot in her career.

“I love the kids here and the principal — it’s wonderful,” she said.

Earlier this year, Nelsen received one of the best surprises of her life.

On March 11, for her 80th birthday, Ash Fork Unified School District surprised Nelsen with cake, balloons and birthday wishes at the school gym.

“I went in and there was the entire school — kindergarten through twelfth grade, all the teachers and staff, everybody was there and they sang happy birthday to me,” she said. “It was just really, really nice — it was special to me.”

Nelsen was showered with gifts and well-wishes throughout the day.

“Ash Fork is different — what the school does for these kids, they keep on top of them to be successful – to be academically successful and a good member of society and to be successful in the outside world,” she said. “They’re a great group of people.”

Nelsen said teaching at any school comes with its own challenges, but the highlights outshine those challenges. She said she looks forward to seeing her students every day.

“I love my interactions with the kids,” she said. “To me, a lot of people don’t like teenagers, but I’m having a great time with them.”

Nelsen said one of the best ways she connects with students is through humor and listening.

“I do a lot with humor and the other thing I do is the minute they walk through that door, I can tell if something is wrong and if they need a little encouragement or a little talk,” she said. “They seem to open up to me — I don’t think they regard me so much as the teacher or mom and dad, but as grandma. I just make sure they get my attention every day. The challenges are the dynamics of what’s outside of school and what they’re experiencing out there.”

When she isn’t at school, Nelsen enjoys staying active and spending time with her dogs, which she takes hunting for upland game birds like quail and chukar.

“My dogs compete in an event called field trialing that is run off of horseback,” she said.

As far as her future teaching career, Nelsen said she plans to continue teaching at Ash Fork.

“As long as my health is good, I plan to keep coming back,” she said.