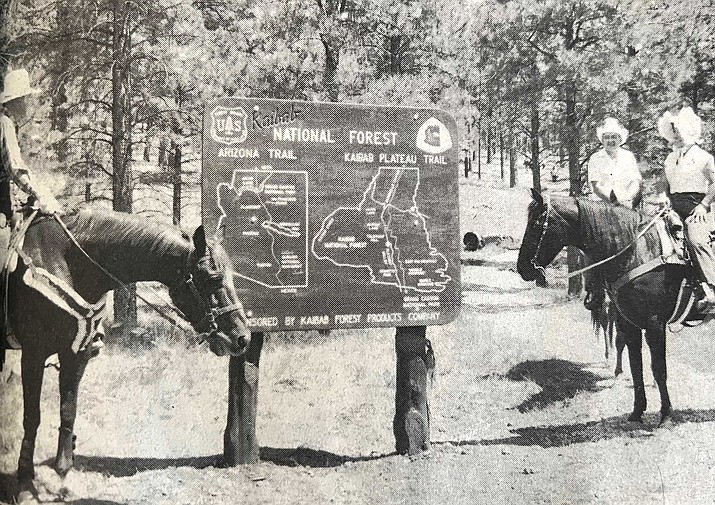 Members of the Arizona State Horseman’s Association prepare for the inaugural trip on the Kaibab Plateau Trail in northern Arizona in 1988. The sign marking the trailhead for the first section of the 800-mile Arizona Trail is now on display at the U.S. Forest Service Visitor Center at Jacob Lake, Arizona. (Photo/Williams-Grand Canyon News)

JACOB LAKE, Ariz. — The historic wooden sign, which marks the first officially recognized section of the Arizona National Scenic Trail, is getting a new permanent home.

“It’s weathered badly and been renovated a couple of times,” said Arizona Trail Director Shawn Redfield. “But that’s a losing battle. It’s going to be taken down and put in the Forest Service visitor center at Jacob Lake.”

The sign was installed to help proclaim the first seven miles of the Arizona Trail when it was inaugurated and officially opened on July 1, 1988, just east of Jacob’s Lake, 40 miles north of the North Rim of the Grand Canyon.

Two hundred and fifty people were in attendance in the middle of the Arizona summer for the event, with guests from both sides of the political aisle. From Republican Rep. Bob Stump. Democratic Sen. Dennis DeConcini to timber company employees and representatives of the Sierra Club. 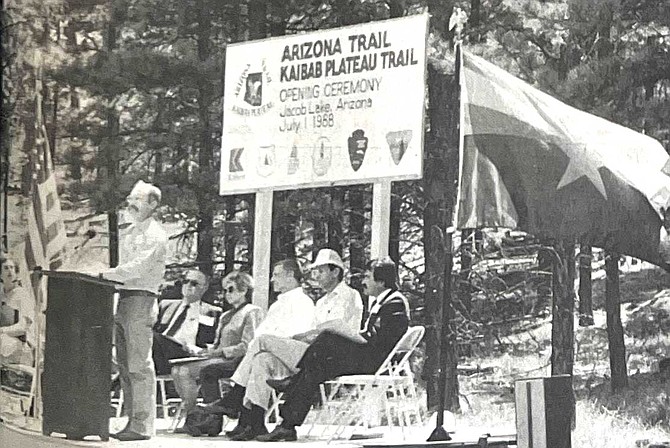 Flagstaff school teacher Dale Shewalter is joined by politicians and members of the U.S. Forest Service as he discusses Arizona’s natural beauty during the 1988 dedication of the Kaibab Plateau Trail near Jacob Lake, Arizona. (Photo/Williams-Grand Canyon News)

“It took a diverse interest group to make the Kaibab Plateau Trail a reality,” Kaibab Industries’ CEO and Chairman Milton Whiting said to Grand Canyon News at the event in 1988. “We think this shows that the private industry and government can work effectively together, retaining scenic character and providing multiple use management for American outdoor enthusiasts.”

“We’ll have a work event in August to work on some reroutes up there,” Redfield said. “There’s a three mile realignment from the Magnum Fire. The trail ... burned intensely and so the erosion is looking pretty bad on the trail. We’re hoping to reroute it up along the sides of the canyon.”