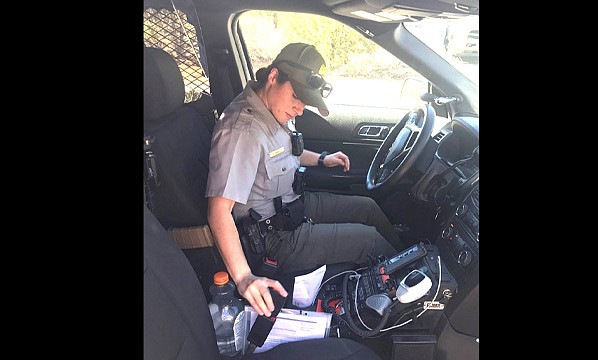 The following is a list of calls from the South Rim District Report for the period ending Feb. 12.

On Jan. 31, rangers conducted a traffic stop for speed and multiple lane violations. Rangers observed signs of impairment on the subject who was found to be driving under the influence of alcohol. The suspect, a 27-year-old male resident of Grand Canyon Village, was arrested for DUI and other traffic offenses.

On Feb. 1, rangers were requested to assist Coconino County Sheriff’s Office (CCSO) at the Valle Airport. The deputy was on a traffic stop with an uncooperative man. The suspect, a 35-year-old resident of Valle, Arizona, was attempting to flee on foot and would not identify himself. Deputies, Rangers and DPS troopers responded to assist, and the suspect was taken into custody without further incident.

On Feb. 2, Grand Canyon law enforcement and emergency services were dispatched to a single vehicle motor vehicle crash (vehicle vs. tree) on Highway 64 at milepost 238. A ranger happened to be in the immediate area and was on scene within minutes of the initial call. Life-saving measures were initiated, but the driver, a 26-year-old female resident of Tusayan, Arizona, died on scene. An investigation into the cause of the crash is being conducted by rangers with assistance from the Arizona Department of Public Safety.

On Feb. 8, rangers were requested by the CCSO to respond to a report of shots fired near Long Jim Loop in Tusayan. A CCSO deputy and rangers with a police K9 searched the area but were unable to locate the source of gunfire.

On Feb. 8, rangers responded to a report of a suspicious person attempting to enter vehicles on the Hermit’s Rest Road. The reporting party gave a good description of the suspect and their vehicle. The description matched that of a man that rangers had contacted the previous night. Rangers searched the area but were unable to locate the man or his vehicle.

On Feb. 10, Grand Canyon Communication Center received a 911 call reporting a woman pounding on the reporting party’s RV door, screaming, saying that she was bleeding and needed help. Rangers responded to the area, but were unable to locate the female after an extensive canvas.

On Feb. 11, rangers were dispatched to a report of an unconscious man at a Grand Canyon Village residence. Upon arrival, the subject was alert, but appeared extremely intoxicated. While rangers and medics were talking to the subject he became unresponsive. After being stabilized on scene, including the administration of NARCAN, he was transported to Flagstaff Medical Center by ambulance and cited into court for being a danger to self – under the influence of alcohol or drugs.

On Feb. 11, rangers were dispatched to a report of a woman who was live-streaming on Youtube and appeared to be having a mental health crisis. There were indications that the woman was on the South Rim in Grand Canyon National Park. Rangers did not find the subject on an initial search. With the onset of daylight, rangers were able to ascertain her location in the live-stream and determined she was on Desert View Drive, east of Grand Canyon Village. Rangers contacted the female, and worked with Terros Crisis Services to provide counseling and transportation to the county mental health agency in Flagstaff.