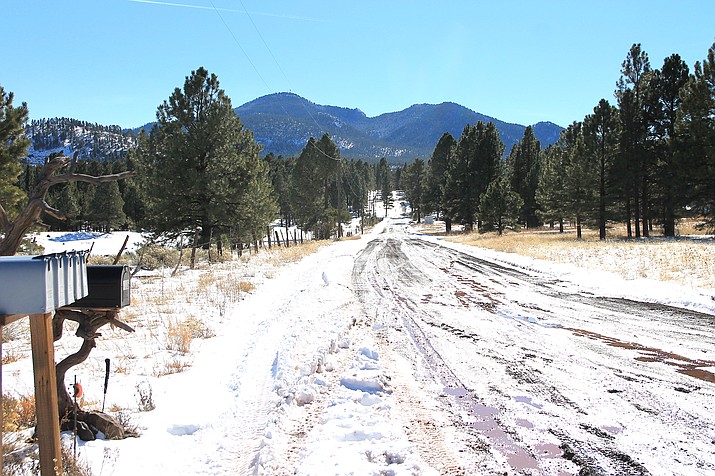 The U.S. Forest Service has expressed concerns about a potential glamping proposal and access to the property. (Wendy Howell/WGCN)

WILLIAMS, Ariz. — A decision on rezoning a 160-acre parcel in Coconino County near Williams for a 150-unit RV resort has been postponed.

The proposal was set to come before the Coconino County Planning and Zoning Commission Feb. 23, however, after the U.S. Forest Service expressed concerns about access, fire risk and other impacts, the commission voted to move the public hearing to May 25 to allow more time to address the concerns.

“As a federal agency, we limit our responses to concerns regarding potential impacts to National Forest System (NFS) lands from proposed development on private property,” Mollet said.

Mollet went on to address four concerns the Forest Service has with the proposal, with fire risk and access the major concerns.

The proposed change in zoning would inherently increase the fire risk adjacent to National Forest lands given the nature of the proposal, including having 150 campsites with fire rings located in a forested area, Mollet said.

“We request that the county take a close look at fire mitigation measures proposed for the project to confirm that they reduce this risk,” she said.

In addition to the fire risk, the Forest Service has several concerns with access to the Cooper Ranch property. The property is currently located off of Cooper Road, or forest system Road 49A, which provides access to Cataract Lake picnic area.

According to the Forest Service, the remaining 1,320 feet provides authorization to only Coconino County, not any other entity or private interest, for access to Cataract Dam and associate pipeline through a special use permit, Mollet said.

“This is an issue with both the private parcels that have developed along Cooper Road and Cooper Ranch Road, along with this parcel proposed for development, as they do not have authorized access over National Forest System roads at this time,” she said.

Mollet went on to say that this could be remedied if Coconino County was interested in assuming jurisdiction and maintenance of the road for county residents as an addendum to a Special Use Permit, or if the homeowners themselves work with the Forest Service for similar Special Use Permits.

“For the Forest Service to issue Special Use Permits to the existing residents or proposed developer, or if there was a need to expand either the footprint of the road or powerlines or the size of the right-of-way, then we would need to consider the changes to the road/powerline and/possibly the development as a connected action,” she said.

If that occurred, the action would trigger the Forest Service’s environmental review processes as mandated by the National Environmental Policy Act, which will likely require extensive public engagement, Mollet said.

“Outside of Cooper Road, Forest Service approval (of) any additional access to the property through NFS lands would be highly unlikely, she said.

In addition to the fire risk and access concerns, the Forest Service also acknowledged the potential problem of new user-created trails being established as campground customers seek to hike or enjoy the forest in their own way.

“These trail systems tend to disregard resource concerns, and often lead to resource damage to federal lands,” Mollet said. “The first step in limiting these impacts is to ensure that a perimeter fence is constructed in a way to discourage access to NFS lands.”

The Forest Service also noted the property lies next to active grazing rangeland.

“As you are aware, Arizona is a ‘fence out’ state, meaning that if livestock are not desired on property that is adjacent to a grazing area, that is the private property owner’s responsibility to fence their property to prevent livestock from entering,” Mollet said.

The Forest Service stated they had received many letters and calls from local residents that are opposed to the project.