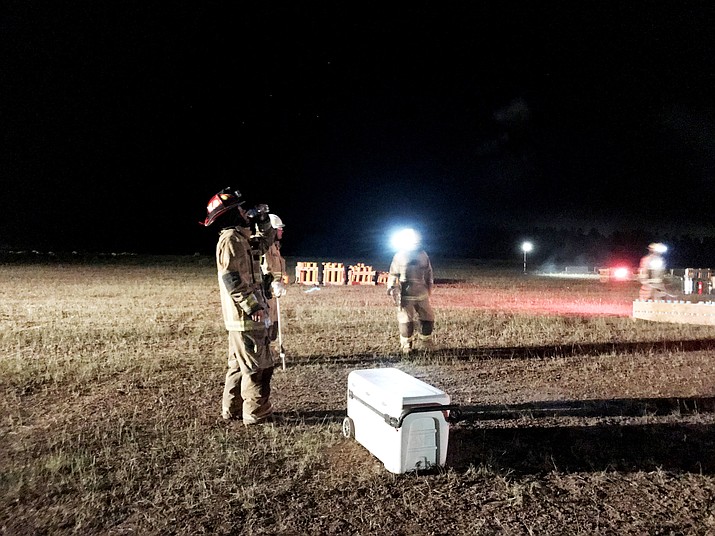 Firefighters spent weeks preparing for a safe and spectacular fireworks display for the city of Williams. (WGCN/photo)

“Everything is tracking for the fireworks to be on July 4,” said Williams Fire Chief Chase Pearson. “We look at a bunch of indicators to make sure it’s going to be a safe show and everything seems to be pointing in that direction.”

Pearson said the show can be cancelled at any time prior to the event, however, recent moisture has helped with some of these concerns.

“There’s always the chance that as it gets closer or the day of, we could cancel the show. The early monsoon season is helpful and it looks like the weather will continue to be favorable,” he said.

According to Justin Sandoval, head pyro for Williams Fire, increased safety margins are in place to ensure a safe and successful event. This includes shooting smaller firework shells and electronically firing the show.

“With the city council, discussions were, ‘How can we make this safer in regards to wildfire concerns?’ And this was the middle ground — to downsize those shells so that there’s not as big of a fallout area,” Sandoval said.

While the show will be very similar to year’s past, the largest shell that will be fired for this show is 6 inches. In 2020, shells were as large as 10 inches.

The show was cancelled in 2021 because of wildland fire concerns.

“We’re all concerned about fire danger and care about the forest, so we wouldn’t do anything to jeopardize that,” Pearson said. “I don’t want anything to happen to the forest or the area around us either, so that’s why we take everything into consideration when making the decision to have the fireworks or not.”

The show will also be 100 percent electronically fired, instead of the traditional hand firing that Williams Fire normally implements for the show.

According to the department, this allows for additional fire personnel to be available should a wildfire or other emergency occur.

The show will be fired at the Sweetwater Property located off Airport Road on the north side of Interstate 40.

For those watching the show, Sandoval said that even with smaller shells, they can still expect to be awed.

“Whenever we have a 6 inch shell it will go up 600 feet in the sky. As far as the crowd goes, the highest shell they’ll see is about 600 feet, so they won’t go as high, but it’s still going to be a good show — these are still big shells,” he said.

Sandoval said he has also made up for the smaller shells by having different ground effects like cakes and comets in place to help bring light to the sky.

The show will last approximately 20 minutes. It starts at dark, around 9 p.m.

The show will take three full days of setup for the department, along with tear down after the show.

Airport Road will be closed 30 minutes before and after the show.

The public should avoid the Sweetwater Property area, including Grand Canyon Boulevard near Love’s Truck Stop and Airport Road. The department is asking that spectators not park on emergency ingress and egress areas so that these routes can be utilized by emergency personnel.

Extra signage will also be in place on I-40 reminding drivers not to stop. Overhead signs along I-40 will be changed and DPS will have increased patrols to keep traffic moving, according to Pearson.