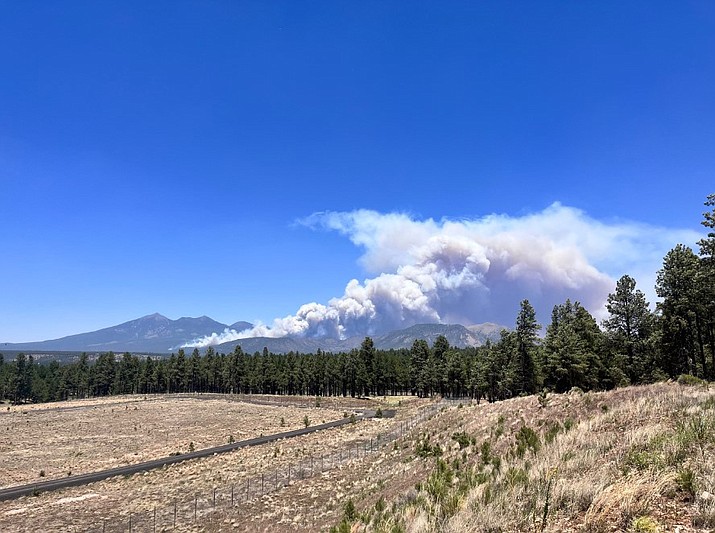 FLAGSTAFF, Ariz. (AP) — The Pipeline Fire that has charred more than 35 ½ square miles in northern Arizona was declared 31 percent contained June 15, according to authorities.

Calmer winds and cooler temperatures have helped firefighters attack the largest blaze by air since it broke out Sunday some six miles north of Flagstaff.

Another wildfire, the Haywire, in a more remote area on the outskirts of the city has burned nearly 8 square miles with no containment yet.

The Type 1 Great Basin Incident Management Team (IMT) 2 has arrived at the Pipeline and Haywire fires, and is shadowing the Type 2 California Interagency IMT 15. The Type 1 team will assume command of the incident 6 a.m. Thursday, June 16.

In addition to using water and retardant dropping aircraft, crews will continue to look for opportunities to directly engage the fire with the intent to suppress the fire’s edge and to keep the fire from entering communities as it continues to move in a northeast direction. Crews continue to use the 2010 Schultz Fire and recent Tunnel Fire footprints to their advantage.

The forecast for later this week called for a chance of showers, which could dampen the blaze but might bring the chance of new fires from lightning strikes.

In New Mexico, the largest wildfire currently burning in the U.S. continues to march through dry mountainside having charred more than 523 square miles while a second fire burning in a more remote corner of the state has been growing due to hot and dry conditions.

In all, federal officials say more than three dozen large fires have burned more than 1.2 million acres in just a few states. Over 6,700 wildland firefighters and support personnel are assigned to incidents across the country.