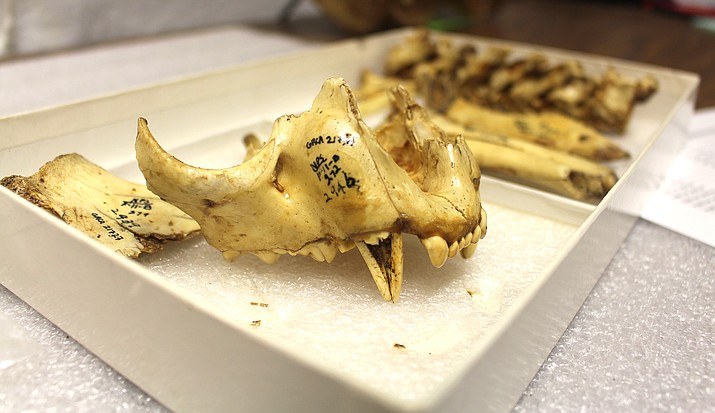 The maxilla of a sub-adult American cheetah that was originally excavated in 1936 at Grand Canyon by the Civilian Conservation Corps and previously identified as mountain lion and has now been identified as an American Cheetah. (Joe Giddens/WGCN)

GRAND CANYON, Ariz. — The fossilized remains of four large cats, found in caves in Grand Canyon National Park several decades ago and thought to be mountain lion remains, have now been identified as American cheetahs (Miracinonyx).

Rampart Cave was discovered and excavated by the Civilian Conservation Corps (CCC) in 1936 and was a residence of the extinct giant Shasta ground sloth, whose skeletons and hair reside now in park collections.

A host of other species were recovered from Rampart including saber-tooth cats, vampire bats and the remains now identified as American cheetah.

According to new research by John-Paul Hodnett, planning commission paleontologist for the Maryland-National Capital Park and Planning Commission, the American cheetah went extinct around 10,000 years ago.

Since original excavations, “mountain lion fossils” from Grand Canyon caves were the accepted norm, according to Hodnett.

However, while Hodnett was a student at Northern Arizona University, he and his colleague Mary Carpenter, looked at fossils from Rampart Cave for Carpenter’s master thesis and Hodnett recognized some of these fossils as American cheetah.

“I was looking over Mary Carpenter’s shoulder and realized, ‘Oh, wait, Mary, you’ve got American cheetah on your desk’ and she did a double take,” he said.

However, Hodnett’s research was put on hold as other projects came up. When he started assisting with a fossil inventory at the Grand Canyon for the park’s centennial celebrations, he dusted off his American cheetah research.

“When we re-looked at it,” he said. “The actual physical features of the bones themselves identify it as being this cheetah-like cat.”

“It (gives) a shorter bite,” Hodnett said. “It helps when they bite around the throat, to close the gap in terms of suffocating the (prey). When a cat does their throat bite, they’re crushing the windpipe and basically suffocating the animal.”

Additionally, American cheetah’s muscle attachments in the ankles provided greater rotation than what mountain lions possess and further show how well these animals were adapted to their environment. This attachment afforded American cheetahs the ability to run at a full clip but also to be able to use their ankles to climb up vertical surfaces, according to Hodnett.

An incomplete picture of the American cheetah’s full skeleton affected the labeling of what individual skeletons were identified as at the Grand Canyon caves. 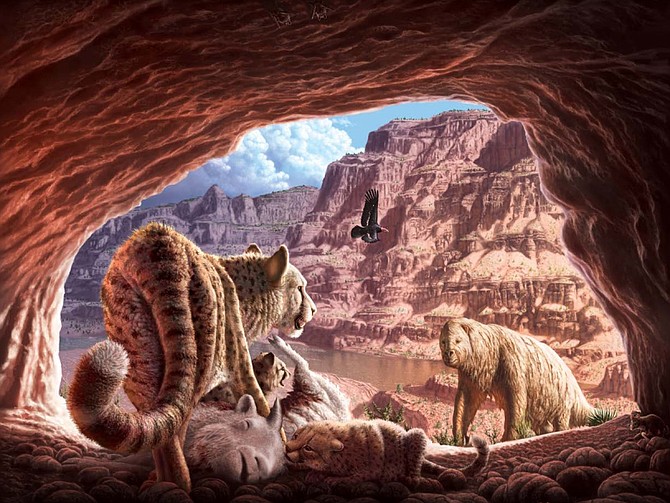 A Pleistocene open woodland scene from the western portion of the Grand Canyon. (Painting by artist Julius Csotonyi)

However, based on genetics, American cheetahs are part of the Puma lineage and related to modern cheetahs, mountain lions and the jaguarundi found on the Texas borderlands, according to Hodnett.

Cold Case in the Ice Age

Hodnett’s research also turned up a bit of a cold case from the Ice Age, with evidence of one of the four American cheetahs buried in generations of ground sloth dung at Rampart Cave, meeting a violent end.

The sub-adult not only had puncture marks on the skull, but also on the spinal region and none of these wounds were healed. The wounds are consistent with damage inflicted by other American cheetah teeth, Hodnett said.

“If it were absolutely those bite marks that actually dispatched that individual or they had a battle scar and couldn’t recover from it,” he said. “That’s also to be determined because unfortunately we don’t have a fully complete skeleton.”

Hodnett compared the behavior of American cheetahs to their relatives the mountain lion where it’s not uncommon in the behavior of cougars to have violent confrontations within their species.