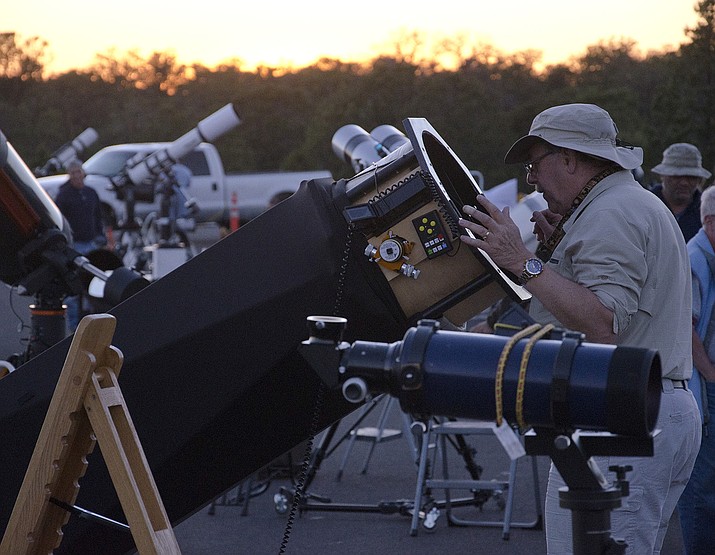 GRAND CANYON, Ariz. — It’s a party on the rim as the 32nd annual Grand Canyon Star Party returns June 18-25 on both the South and North rims of Grand Canyon National Park.

This is the first time the event has been held on-site since 2019, after being held virtual because of COVID-19.

This is the first Star Party since Grand Canyon received its designation as an International Dark Sky Park and the park is excited to kick off the event with even darker skies after reducing their light pollution through extensive retrofitting of light fixtures.

Event guest speaker and GRCA former Astronomer in Resident Dean Regas said he is excited to return to the South Rim for the event.

“I’m very excited to be coming back to the Grand Canyon star party,” he said. “After a few years of helping remotely, I cannot wait to see the wonder, joy and excitement of the visitors first-hand as they see and hear world-class astronomers and view a dark, night sky full of stars.”

To accommodate star viewing for visitors between 50-70 telescopes will be set up in the parking lot directly behind the South Rim Visitor Center nightly. That entire lot will be closed to vehicles for the week. Several large telescopes will be available this year, including at least two 28 inch mirror telescopes and around a dozen video scopes providing live feeds onto monitors, according to Grand Canyon Night Sky Ranger Rader Lane.

The video scopes will afford visitors the opportunity to talk with astronomers who are capturing high quality images of celestial objects and will better serve guests with accessibility issues, according to Lane.

Regas said this is a unique experience for visitors to view night skies.

A variety of special guest speakers will be held nightly at 8 p.m. (doors open 20 minutes before) with limited-capacity seating in the South Rim Visitor Center. Speakers will include representatives from NASA talking about the James Webb Space Telescope and other related projects.

Rangers and astronomers will also use laser pointers to map the constellations in the telescope at 9, 9:30 and 10 p.m., with educational activities during the day. Solar telescopes will also be set up throughout the park

Visitors will have the opportunity to contribute to a new film project for Grand Canyon by recording their responses at a station in the telescope field to a prompt that will be revealed on opening night. The project will be similar to Lane’s film “Night Requiem,” which recently won Best of Show at The Coconino Center for the Arts juried art exhibition NightVisions 2022.

The North Rim of the Grand Canyon will also be celebrating with evening programming and solar telescopes with the event sponsored by the Saguaro Astronomy Club of Phoenix, however there will not be guest speakers this year on the North Rim, according to Lane.

“It’s very much like the North Rim itself,” he said. “A lot quieter and more intimate (but) equally as beautiful and so if you prefer that the North is definitely the place to go.”

Rangers are encouraging guests to dress warmly as it tends to get cold even at night in Grand Canyon and bring a red source of light to preserve their fellow guest’s night vision and to bring family and friends.

“I advise folks to stay out a bit later this year or arrive a bit later to see some of the more charismatic celestial phenomena like Jupiter and Saturn,” Lane said. “Those are going to rise a little bit later this year. But the regular list of nebula and galaxies and clusters that make the summer nice guy so special will be visible to all the telescopes.”

Additional astronomy events are planned for later in the year.

The park’s next Astronomer in Residence is author Lauren Camp who will be working at Grand Canyon August 2-28 and is anticipated to offer creative writing workshops to visitors. Additionally the park is looking at incorporating Indigenous voices about the night sky at the Desert View Intertribal Cultural Heritage site through demonstration programs, way-side (signs) and other installations, according to Lane.