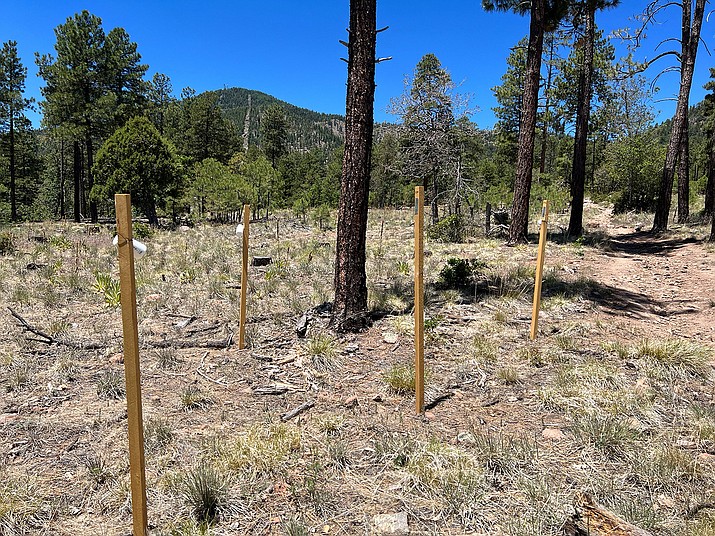 A pozzolan mine is being considered for operation on the east side of Bill Williams Mountain. (Wendy Howell/WGCN)

WILLIAMS, Ariz. — The city of Williams has made a stand against pozzolan mining on Bill Williams Mountain.

“Due to the significant expected negative impact that a pozzolan mine presents to the community, environment, tourism, water sources, and at least one local tribe, it is the city’s most sincere desire that Drake Cement not proceed with a mining operation at this location,” Pettit said in the letter.

The Drake footprint is roughly two miles long by one mile wide. It begins on Kaibab National Forest lands just south of the Elk Ridge Ski area and proceeds the south parallel to the Perkinsville Road for two miles.

Despite recent approval for a pozzolan mining operation northeast of Williams near Frenchy Pit, Drake Cement began the exploratory process to find more pozzolan in the Williams area for its cement plant near Paulden, Arizona.

In March, residents along Perkinsville Road began to see markers going up in forested areas bordering the rural neighborhoods and determined the markers were placed by Drake Cement and covered approximately 850 acres on the east side of Bill Williams Mountain.

At the June 9 Williams City Council meeting, council members received a signed petition and heard from residents about the potential impacts to their neighborhoods. Council members agreed to draft a letter opposing the mining operation.

“The mayor, vice mayor and city council all joined in opposing mining with city limits,” Pettit said in the letter. “It is clear that Drake Cement’s proposed mining operation is not welcomed by the local population or government.”

Pettit said one concern the city has is the environmental impact of an open-pit mine on the forests of Bill Williams Mountain.

“Drake Cement’s mining claims are on the east side of Bill Williams Mountain and largely within city limits, over vital watershed areas and archaeological sites, and adjoins private property,” he said. “The area is a sacred site for several tribes.”

Pettit expressed concerns with the impacts on tourism.

“Williams is a city surrounded by the Kaibab National Forest and tourism is vital to its existence,” he said. “A mine will create pollution, noise and industrial traffic, and will severely damage tourism and the day-to-day lives of the local populace and diminish property values. A mining scar on the side of Bill Williams Mountain will greatly tarnish the beauty of the mountain for decades, or even centuries, and negatively impact the local wildlife.”

The city is also concerned about the impact on the city’s water supply and interference with forest thinning.

The Cataract Creek watershed, located within Drake Cement’s claim, is a critical source of clean water to the city of Williams, he said.

“Should a wildfire occur in the area, the risk of flooding is substantial,” Pettit said. “Flooding through or from the mine could potentially contaminate this vital source of water for the community.”

The city hopes that Drake Cement will honor their commitment to social environmental responsibility, as stated on their website.

“We beseech Drake Cement to put responsibility ahead of profits and truly consider the impacts on the environment and the people who live in and around Williams,” the city said. Drake Cement can expect the mine to be wildly unpopular with the local residents, as it would be a threat to their very existence.”

The General Mining Law of 1872 states that all valuable mineral deposits in Public Domain lands of the United States are free and open to exploration and development.

The Forest Service Mining Regulations set forth rules and procedures for use of the surface of National Forest System lands in connection with mineral operations. The USFS role is to review and approve the operating plan for this activity and apply any needed mitigation and reclamation requirements.