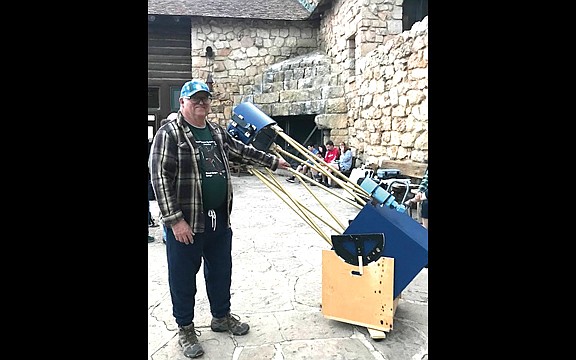 GRAND CANYON NORTH RIM, Ariz. — As event coordinator for the Saguaro Astronomy Club, Steve Dodder, has been essential to the success of Grand Canyon’s North Rim Star Party for the past 26 years, according to Grand Canyon National Park.

According to the park, Dodder’s interest in the stars started at a young age, when he and his family would watch the night skies on camping trips in Canada.

“I remember thinking to myself I am going to learn more about that,” Dodder said.

Years later, Dodder was lying on the roof of his house in Maricopa, Arizona when he felt a spark of inspiration. He’d watched the Milky Way many times, but Dodder said that was the moment he decided to learn more. The next day he bought his first telescope and spent two years learning how to use it. He then joined an astronomy club to help educate other amateurs, which led him to the Grand Canyon Star Party.

Dodder said his favorite part of the North Rim Star Party is watching people’s first reaction to the night skies.

“When they see something for the first time, when you can feel their strong reaction,” he said.

His love for sharing the night skies with others is evident, according to the park.


“When he talks about the 30 hand-crafted scopes he has made, varying from 4.5-inch solar scopes to 20-inch telescopes,” the park stated. “Steve’s passion for astronomy is profound and we appreciate his 26 years of service as coordinator to the North Rim Star Party.”

The Grand Canyon Star Parties are held on the North and South Rims. More information is available at https://www.nps.gov/grca/planyourvisit/grand-canyon-star-party.htm