Column: Thankful for a career in public service, it all started in Williams 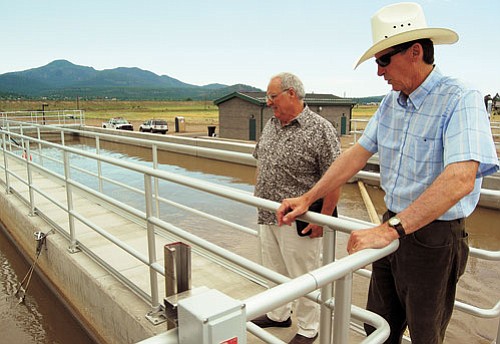 Following 40-plus years of service to the citizens of Williams and northern Arizona I want to thank the citizens of the Williams area for the support and encouragement they gave me through the years in my public service career.

Williams is near and dear to my heart and always will be. Williams is my home town, and as you may know, my family has been in Williams since 1913.

I began my career as a paper boy for the Williams News where my interest in serving the community began.

The formal beginning of my public service career began, when at the age of 25, I was the youngest person to be elected to the position of County Supervisor in the State of Arizona. My tenure lasted for 18 years in the Williams-Grand Canyon district. With the backing of the people of district 3, we completed many projects for the Williams area. My brother Doug and I worked together on many of these projects using the backing of the citizens and newspaper to get things done.

One of our proudest accomplishments was preventing a move by the Department of Agriculture to consolidate the Kaibab National Forest into the Coconino National Forest. This proposal would have resulted in the combined forests being administered and staffed out of Flagstaff.

At the invitation of the Governor of Arizona (following 18 years as County Supervisor), I then made a career move to become the State Land Commissioner for the State of Arizona. The Department was charged with administering over 9 million acres of State Trust Land, much of it located in Northern Arizona. As State Land Commissioner, I worked hard to ensure the public had access to state trust lands for recreational purposes such as camping, hunting and fishing.

Following my state land experience, I applied for and landed the position of Williams city manager. My goal was to use my planning experience and political contacts to further the interests of Williams. As city manager, working with Mayor Ken Edes and the council, we were able to accomplish 22 major infrastructure projects in just over eight years. These projects included rebuilding the water treatment plan and constructing the first and only true wastewater treatment plant Williams has had. We also drilled the most successful deep city well at this time, known as Dogtown three. We also rebuilt City Dam and along with the help of Al Richmond and city crews, built the iconic gateway arch.

Following my city service, I landed the biggest and most challenging job of my career. I was appointed to become the second Arizona State Ombudsman/Citizens Aide in state history. For both of the five year terms that I served in this position, I received a unanimous vote of both legislative chambers and the governor. This support was critical as I was charged with assisting Arizona citizens statewide and investigating the inner workings of every State of Arizona agency, these included ADOT, DCS and DES to name a few. I attribute the success I had in this position to the enduring support received from my home town of Williams.

As state ombudsman, my capable staff and I were able to assist thousands of Arizonans in solving the problems they were encountering with state agencies.

My special focus, was always on assisting people in Williams and surrounding areas to resolve the problems they had with the state.

I retired July 1 and would be remiss if I did not personally thank all the citizens of Williams and Northern Arizona for my dream career as a public servant.

It all started as a paper boy for the Williams News!