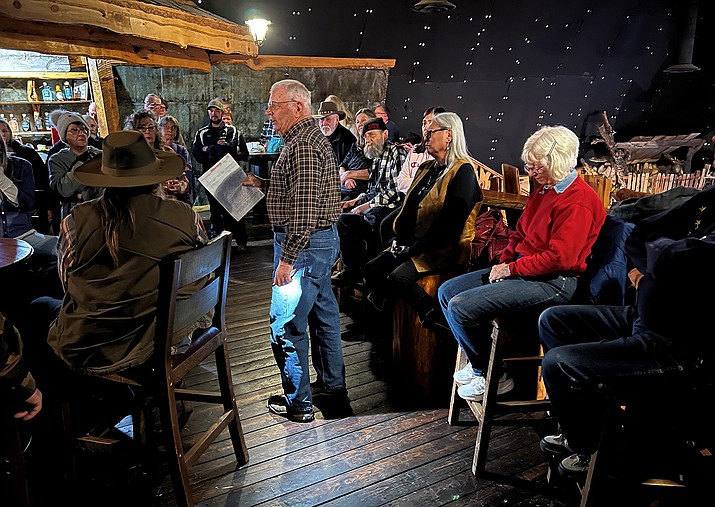 WILLIAMS, Ariz. — Representatives of AutoCamp came to Williams Jan. 4 for an informal meet and greet with neighbors of Cooper Ranch to discuss their proposed project, however, the group was met with staunch opposition from those in attendance.

AutoCamp Acquistion Manager Bernie Corea and Senior Vice President of Acquisition and Development Stephen Kallaher told the estimated 30 in attendance at Grand Canyon Brewery that they had not planned a formal presentation, but were there to answer questions about the development.

Instead of questions, several member of the community spoke against the development, citing specific concerns in some cases, but mostly outright opposing the development altogether.

“It’s a great concept, but is it the right place for Williams, Arizona and the county?” said Williams resident John Kling. “I think a lot of us feel passionately that it’s not.”

Many of the neighbors felt they weren’t given a chance to speak at the video-streamed meeting the developers held previously, and used the meet and greet as an opportunity to voice their concerns.

“The two zoning authorities together (the city of Williams and Coconino County) came up with a comprehensive logical land use plan that defines this as a residential area and we’re here to make sure it stays that way,” said resident Dennis Nelson.

Nelson said he represents the Cataract Lake Neighborhood Association and wanted to reiterate their stance on opposing the rezoning.

“We are very concerned with the project in that it will change the character of our entire area which is currently zoned one house per 10 acres, that’s why my wife and I bought it in 1985, we want to preserve that,” Kling.

Kling went on to say that whatever AutoCamp proposes will be unacceptable to the group.

“We are not here to mitigate or here for mediation, we are here to make it very clear that we oppose this rezoning, period,” Kling said. “The property has been zoned the way it is since 1957 and we don’t want that to change.”

Kling said the possibility of future commercial growth on the property is a concern if the land is rezoned.

“We aren’t opposed to the concept, we are opposed to where they are putting it,” he said.

Resident Rich Kush expounded the fire danger of having the large camp near the residences by Cataract Lake.

“To myself and others I’ve spoken to, the fire danger concern is huge,” Kush said. “We’re talking about 150 sites with 150 fire pits and grills and people coming and going all the time. We all know what the forest is like during the dry season.”

Kush brought up the recent wildland fire that burned more than 1,000 homes in Superior, Colorado.

“The devastation those fires had almost knocked out the towns, we all have seen that. We saw that in northern California last summer,” he said. “I don’t want that fire danger to happen to any of our homes or the city of Williams.”

Few questions were asked of the AutoCamp representatives, as the community members mostly addressed each other with their concerns and opposition.

The AutoCamp rezoning proposal will come before the Coconino County Planning and Zoning Commission for a public hearing Feb. 23. The Williams City Council plans to discuss the AutoCamp proposal at their next meeting, Jan. 13.