Northern Arizona astronomy: How humans can survive on Mars 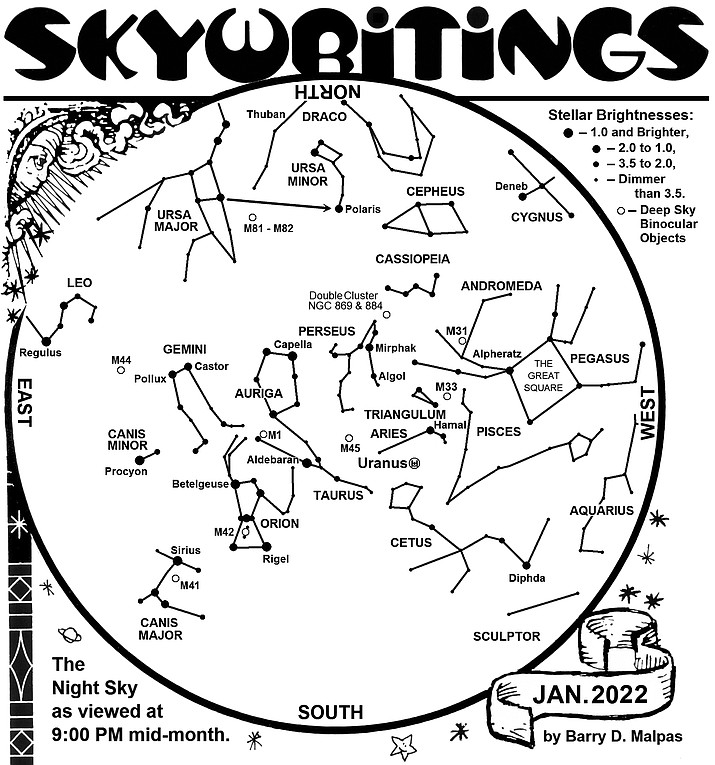 Last month I reviewed the basic difficulties of going to and returning from Mars.

However, the main reason in taking such a trip is to land on the planet and set up a small colony for human exploration. For this to happen as safely as possible we should first send several missions for the following purposes:

• Put in place an orbiting unmanned vehicle, a base camp, that would contain basic survival materials, including food, water, Oxygen, communications equipment, etc., and enough fuel for a return trip.

• A second unmanned vehicle that could land on Mars carrying materials for small modular buildings, in which the vehicle would also become a modular part of these buildings.

• A third vehicle capable of landing with basic survival materials as previously mentioned, but also having enough fuel to be able to return to the orbiting base camp.

• Lastly would be to land the inhabited vehicle, which would also contain survival materials, albeit lessened due to the seven month Earth to Mars journey.

Unlike going to the Moon, where a possible safety net might be 3-5 days away, Mars is from 1-2 years away. Hence the crew aboard the mission would be on their own. Survivability would depend on a number of capabilities that would require use of materials brought as well as found on the planet.

• Medical – With only about a half dozen people being in the first astronaut crew, one should be a doctor with all other members capable of performing basic medical procedures, including dental.

• Water – Although water is known to be at the polar caps, the first habitat location will most probably be near the equator where it is significantly warmer. Hence equipment would be needed to extract water from hydrated minerals such as gypsum, as well as extraction from below the soil.

• Farming Food – Fortunately, all the necessary nutrients have been detected in Martian soil by Mars probes or in Martian meteorites that have landed on Earth. Researchers have demonstrated that crops such as tomatoes, cress, potatoes and mustard should grow in Martian soil. Others are dandelions, lettuce, arugula, spinach, peas, garlic, kale and onions. However, Martian dirt has been found to contain high concentrations of Chlorine based compounds such as toxic Calcium Per-chlorate, which would first require removal using reverse osmosis, UV photochemical or bacterial methods.

• Air – The atmosphere on Mars, which is about 100 times thinner than Earth’s, is mostly composed of Carbon Dioxide, with almost no Oxygen. The NASA Perseverance Rover’s MOXIE mission demonstrated that it was possible to convert the CO2 into usable Oxygen for astronauts to breathe.

• Radiation – The Sun produces vast amounts of cancer causing radiation including X-rays, Gamma Rays and Ultra Violet radiation which are shielded by Earth’s atmosphere (primarily Ozone and water vapor) and its magnetic field. Unfortunately, Mars has no such defence and the radiation reaching the Red Planets’ surface is about 50 times greater than on Earth. The more material between the astronauts and the sun’s rays (such as engine assembly, cargo and fuel) the better they will be protected from the harsh radiation. The ISS orbits within Earth’s magnetic field and the longest time spent beyond the Van Allen radiation belt is about 12 days for the Apollo missions. So for however the duration of the Mars mission (two years or longer), protection from radiation will be paramount.

• Meteors – Another concern is protection from small meteors. Earth’s atmosphere burns most of these small rocks up due to friction. However, with no appreciable atmosphere, they could easily pass through Mars’ atmosphere to penetrate temporary habitat or space vehicle walls.

Future Habitats – Once a major foothold is completed on Mars, plans would be made to create more permanent structures using autonomous robots and 3D printing techniques. Soil from the Martian surface would be excavated and then mixed with water producing a material similar to concrete. The structure would then be 3D printed, layer by layer, by the robots. Once completed, the habitats would then be covered by soil to further reinforce the habitats to protect the new “Martians” from radiation and meteorites.