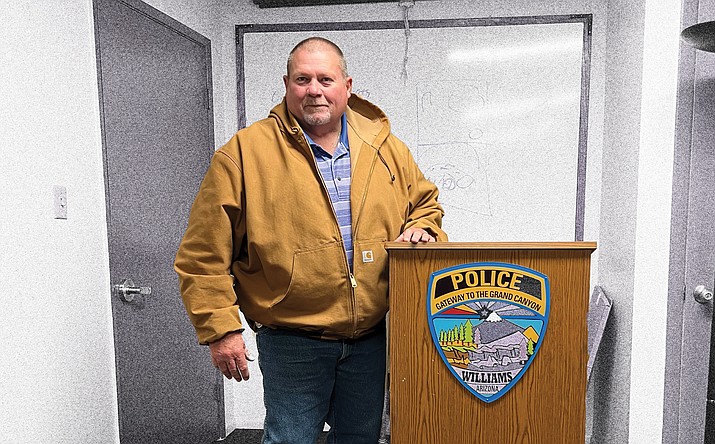 The chief has left the building.

The walls are empty, the family photos, team plaques and awards have been taken down, and the office sits vacant waiting for a new officer to take the helm.

After nearly 41 years in law enforcement, 16 years for the city of Williams, Herman Nixon has stepped down as the Williams police chief.

“It’s time, it’s just time,” Nixon said as he reflected on his career. “I never thought I’d do 16 years here, but I enjoyed it so much and enjoyed the challenge every day, that I just kept going.”

Rarely has there been a major incident in Williams where Nixon hasn’t been on scene, or a parade where Nixon isn’t leading the floats, nor a high school football game where his isn’t on the sidelines.

His larger than life presence has made a positive impact on the city of Williams, whether it be his relentless energy in gaining the trust of the community or his dedication in serving on the Williams Unified School District Governing Board.

“It’s hard not to see what Herman has done for this community over the past 16 years,” said Williams Vice-Mayor Don Dent.

Nixon has had several opportunities to retire, but said his desire to serve his communities and his drive to face challenges have kept him in law enforcement.

“I could never do something at just 50 percent, I always give everything I’ve got,” Nixon said. “It’s one, my personality, and two, my responsibility to the city and the citizens. My wife went through hell many times with me.”

Nixon began his career in Arizona in 1981 with El Mirage and Youngtown Police Departments, and then was hired to work at Surprise Police Department where he stayed for the next 22 years, working his way through the ranks as a member of SWAT and the homicide teams, and eventually assistant chief.

“It went from a small town of five or six thousand, mostly migrant farm workers, and then it blew up to twenty-five or thirty thousand people in a blink of an eye,” he said. “We started with an eight-man department and when I retired we had about 135 officers.”

Although he retired from Surprise under the Public Safety retirement system, Nixon wasn’t ready to hang up his hat in law enforcement, and when opportunity came knocking Nixon jumped at the chance to head the Clifton Police Department.

“I was tired of getting that call every night of a homicide, and when you work for a larger department you are pretty much segregated from the troops,” he said. “I saw how beautiful Clifton was and I put in for the job and they hired me.”

Nixon spent the next two years at Clifton before he saw the chief job in Williams.

“This place was a unique community when I got here, they had gone through some chiefs and had a lot of problems,” he said. “I had done some research and talked to a lot of people, and I was looking for a challenge.”

Nixon expected to stay just a few years to help build the police department into a program that people could trust.

“In no way did I think I was going to be here 16 years, my plan was to be here five years,” he said. “A lot of that is attributed to the things I got involved with in the community — the youth, the school board — I made a lot of good friendships here that will continue when I leave.”

In addition to the police department, Nixon has served multiple terms on the WUSD Governing Board and has spent time coaching youth baseball and football teams.

Nixon has led the police department through some tumultuous times, which include the COVID-19 pandemic and the George Floyd incident. Nixon worked closely with the Williams City Council on reporting COVD-19 case counts and giving recommendations.

“COVID has been some rough times,” Nixon said. “You had to make decisions and use common sense. We knew that mask mandates and closing businesses would ruin the livelihood of Williams, and we just couldn’t do that.”

Although the George Floyd incident happened in a large city, the repercussions were felt even in the small community of Williams. Nixon said officers felt supported by the local community, but were still confronted by others visiting or passing through the area.

“You saw the Black Lives Matter shirts all over the place here. You had the Antifa followers showing up, and people we stopped were calling us every name in the book — but we dealt with it,” he said. “The thing I can’t say enough of is that we never lost the support of our community.”

That community is the reason Nixon has stuck around so long. He said it’s unique to have a community that routinely backs their law enforcement.

“You aren’t going to make everybody happy, the ones that are getting into trouble are usually the ones that don’t like us,” he said.

When training new officers, Nixon said he taught them the importance of being fair with the community.

When looking at the future of the community, Nixon said he is concerned about future growth and the impact on emergency services. He said the city council and grants have provided adequate funding for police equipment, but said it’s difficult to hire and retain officers in Williams.

“The council has been generous, but the cost of living here is outrageous,” he said. “So we are trying to bring in young officers or even seasoned officers and we tell them we are going to pay you a very low wage and we don’t know where you are going to live.”

In addition to the police department, Nixon continues to be concerned about ambulance response times and the demands on a volunteer fire department.

Despite the change of leadership, Nixon is confident in the staff he is leaving behind. Long-time Williams officer Tad Wygal has been hired to replace Nixon, and several experienced officers will be there to assist.

“I don’t think you are going to see much change with Tad,” Nixon said. “He’s been here a long time, he knows the community. He’s got a good second in command and he knows what needs to be done.”

Nixon said it’s his staff and those in other city departments that has helped grow the police department into a program the community can count on.

“The great thing about the city is when we got a major incident, I could make one phone call and I’ve got city crews out there blocking streets, the fire department assisting — when something big happens, this group of employees comes together quickly,” he said.

With plans to keep his home in Williams, but buy another home in a warmer climate, Nixon said he still plans to be on the school board and coach youth sports. He said people will still see him around town.

“I’m going to spend time with my wife and my grandkids, and play some golf,” he said. “I’m going to enjoy the rest of the time I have left on this earth,” he said. “I won’t say it isn’t going to be difficult for me to put away the gun and badge and go off into the sunset, but its time.”