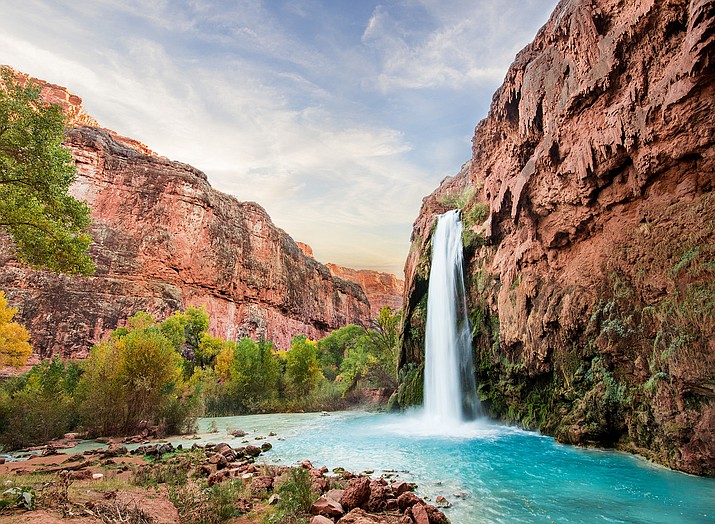 LAKE HAVASU CITY, Ariz. -- The Havasupai Tribe announced Friday that it plans to reopen its tourism operations in 2023.

The Tribe, located in Mohave County on the Grand Canyon's West Rim, operates permits for the popular Havasu Falls. Tourism at the reservation has been closed since the start of the coronavirus pandemic in March 2020.

The reservation will reopen to tourists on Feb. 1 for current permit holders.

The Supai campground sits along Havasu Creek between Havasu Falls and Mooney Falls in the Grand Canyon. The campground and natural wonder draws thousands of travelers every year. As long as a permit has been obtained, campers can settle wherever they’d like.

The trek to get there is not for the faint of heart, however. With 10 miles to the campground, visitors are advised to plan for at least four hours to get to the falls and at least six to climb back out of the canyon.

Earlier this fall, reservation communities experienced severe flooding, which destroyed several bridges and trails necessary for tourists and residents in the Supai Village. Visitors should expect to see a number of downed trees on the trails where the flood occurred, but flora and fauna in the area are thriving, and there are new waterfall flows to observe, the Tribal statement said.

The path to reopening wasn't without additional perils. The Tribe says it has had disagreements with the former company hired to provide online tourism operations and customer service. The disagreement led to a court dispute and required the Tribe to hire a new vendor and rebuild the online tourism platform in anticipation of the 2023 season.

According to the official statement from the tribe, its former vendor denied the Tribe access to its tourism credit card processing application, impacting the Tribe's ability to issue credit card reimbursements for transferred permits. As a result, anyone who booked a reservation before Aug. 12, 2022, and later sold it via the official transfer system, will be issued a hard-copy check for reimbursement, the statement said.

Information on reservations can be found at havasupaireservations.com. The Tribe also announced the launch of an official tourism page on Facebook at www.facebook.com/HavasupaiTribeTourismOfficial.