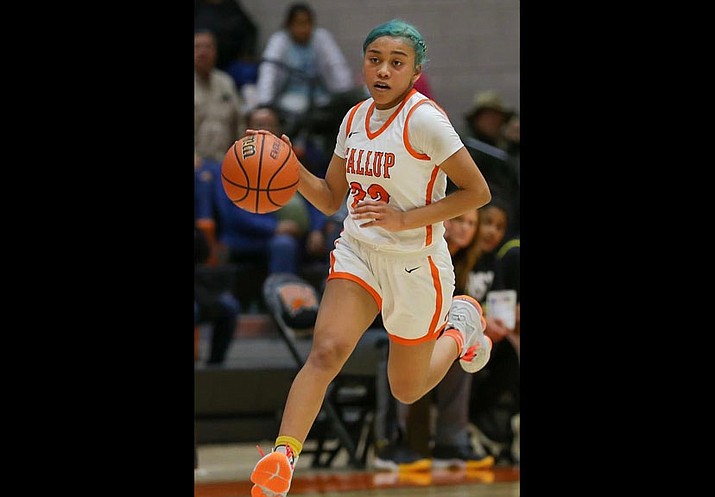 Up until the third quarter, the game was back and forth in terms of scoring, until the Lady Bengals pulled ahead for good in the fourth quarter. Key in the pull away was senior point guard Daliyah Morris, who ran a steady offense down the stretch.

In six years as the Gallup girls head basketball coach, Todd McBroom has never lost to the Lady Scouts. That span covers three Window Rock head coaches. The game was the fourth straight win for the Lady Bengals.

And with the win, Gallup improved to 6-2. The Lady Scouts dropped to 4-3. The game is considered a rival contest between a (Navajo) reservation team and an off-reservation team.

“It was a very close game and both teams played very hard and very smart throughout,” McBroom said. “We managed to pull away in the fourth and that was, obviously, a good thing.”

The Lady Bengals were on the defensive a lot in the first quarter of the game, and ended the first half down to Window Rock, 20-13. Gallup’s senior guard Kiera Livingston was an important cog from start to finish, with steady leadership and scoring, McBroom pointed out after the game.

Livingston hit two consecutive 3-pointers in the third quarter which aided Gallup in furthering leads. Livingston ended the game with 17 points and four assists. Gallup’s Morris was often in the right place at the right time throughout the game, putting up an important eight points and six assists from the point guard spot against the stingy Window Rock defense.

Window Rock junior guard Melicia Nelson scored 10 points and was often double-teamed in the game. Nelson is a constant mover and threat to score on offense, and the Lady Scouts’ best offensive player, but couldn’t shake the Lady Bengals long enough for consistent scoring opportunities. Nelson came of the bench last year for the Lady Scouts, who saw a handful of players go to college to play.

Sophomore center Rylie Whitehair scored 10 points overall and grabbed five rebounds to give the Lady Scouts a presence down low. Shirley Yazzie broke free for 15 points and five rebounds and managed to get fouled frequently, which put the Lady Bengals in foul trouble down the stretch.

Gabrielle Whitney, head coach of the Lady Scouts and a former superstar player at Ganado High back-in-the-day, said the game was pretty even up until the latter part of the third quarter. She said the Lady Scouts missed some easy scoring opportunities and passes in the third and fourth quarter stretch, and those were factors in the loss.