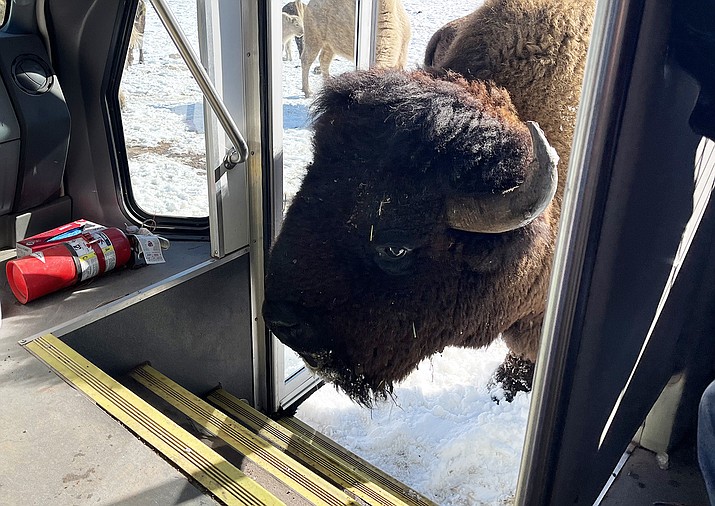 You never know what you'll see on the Bearizona VIP tour. Here, a large American bison peeks his head in the tour bus, hoping to receive an apple. (Summer Serino/WGCN)

WILLIAMS, Ariz. — Bearizona recently invited me to join them on their VIP experience. I had only been to the wildlife park once a few years ago and was eager to see what the new tour would offer.

Bearizona was first opened in Williams in 2010 by founder, Sean Casey. The 160 acre park allows visitors to see wild animals via walk-thru or drive-thru. As a member of the Zoological Association of America and American Association of Zoo Keepers, Bearizona is dedicated to responsible wildlife management, conservation and education. Bearizona began offering the new VIP experience in June of this year.

Arriving a few minutes early to the experience, I met with my tour guide, Norm Westerdale, and some of our other VIP group members. The tour meets at “Central Park,” which is where the coffee trailer and patio bar are located.

Each guest received a coupon for a drink of their choice from either drink spot for before or after the tour. Many of the guests opted to get a hot coffee while waiting for our official tour time to start. In the meantime, guests could ask Westerdale questions or enjoy the ambiance of the surroundings, such as the white peacock that crossed our path on its morning scroll.

At 10:00 a.m., the tour promptly began. We were taken off the regular path onto what is usually an employee only walkway. We arrived at the “animal house” where keepers happily welcomed us. Here, the VIP guests have access to the behind-the-scenes world of the program animal department.

“All the animals that walk out for the public and fly in the shows, you get to see all of them and how they’re cared for in the mornings," said Dave O’Connell, director of animal staff. "You can ask questions and see where they live."

We spent about 25 minutes walking through the animal house at our own pace. Guests could ask keepers questions and take photos. Inside were creatures such as a crested seriema, raccoon, mountain coatimundi, fennec fox, North American porcupine, African crested porcupine, striped skunk and more, many of which were eating breakfast. As we observed the animals, the keepers told us about their personalities, behaviors and fun facts.

The keepers gathered us together to watch the animals perform some special tasks. In exchange for a treat, Cleo, the fennec fox, hopped onto her scale revealing her weight of 1,178 grams, or 2.6 pounds. The keeper explained this completely voluntary task keeps Cleo feeling comfortable and safe, as opposed to forcibly being picked up and put on a scale. 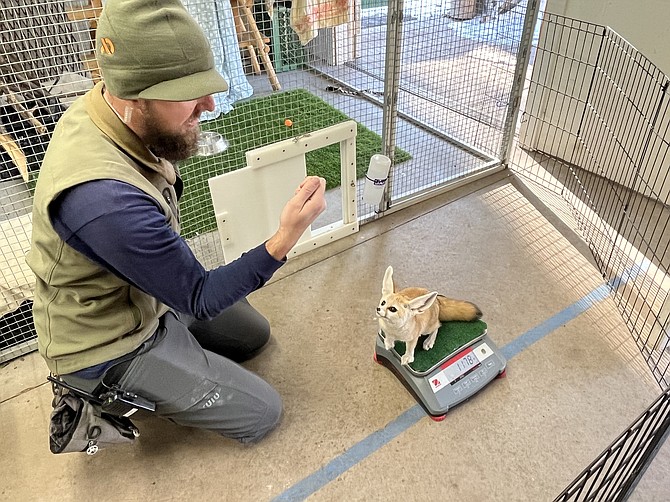 Cleo the fennec fox hops on her scale to earn a treat. (Summer Serino/WGCN)

“We do so much work in making sure animals are healthy, are trained well and are able to work with us in this facility that people don’t even know about,” O’Connell said. “The animals are so well trained that we can show it off as a presentation to the public. That’s pretty exciting to me.”

To earn another treat, Cleo hopped onto a platform within her enclosure and offered fist bumps to guests. This was her newest trick. Working with the keepers to learn tasks like hopping on the scale and giving fist bumps keeps the animals happy, healthy and their lives enriched, according to the trainers.

Following Cleo, another star came out, Peter the porcupine. Peter climbed a log where a treat awaited him at the top. While he sat at the top of the log, guests took turns feeding him a treat out of the palm of their hands. 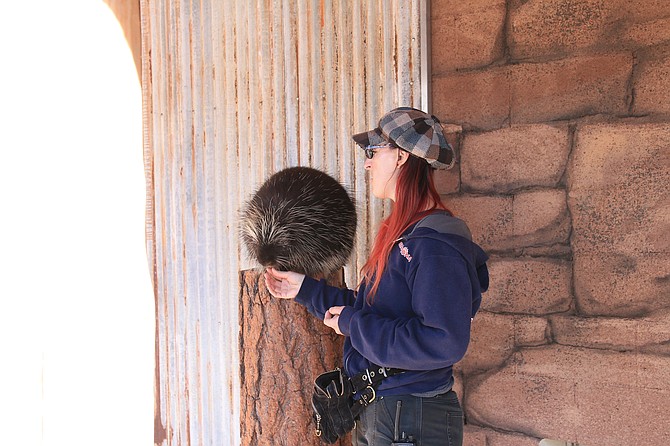 Peter the porcupine climbs up a log and is rewarded with a treat. (Summer Serino/WGCN)

“You won’t always necessarily get to fist bump Cleo or get to feed Peter the porcupine, but in general there’ll be something neat like that on every tour, and if you’re lucky you might get to do those things,” O’Connell said.

We took our final photos as the VIP bus rolled up. As a keepsake from the animals, Westerdale handed each of us our very own porcupine quill to take home.

We hopped on the bus and began heading towards the drive-thru part of the park. We passed some old metal shipping containers and vehicles. Westerdale pointed them out and said that the park has recycled over 200,000 tons of scrap metal and steel in the walls of enclosures for the park. The metal recycling is just one of the park’s conservation initiatives.

Before I knew it, we were in the park driving by deer and mountain goats. Westerdale pointed out every animal, including ones I would’ve missed. Some of my favorites were Tom Brady, Serena Williams and Michael B Jordan, the mountain goats. Westerdale put our animal knowledge to the test as we drove through the enclosures, giving guests a chance to win Bearizona swag.

The bus stopped at the wolf exhibit where we got off and sat in front of the wolf training center. Wolves were in their enclosure running around, playing with one another and hoping for treats. The keepers gave us some background on the wolves, including the new puppies. We even saw how the keepers had trained a wolf to back into a syringe and receive vaccines in exchange for treats. Similar to Cleo being weighed, the task was completely voluntary. 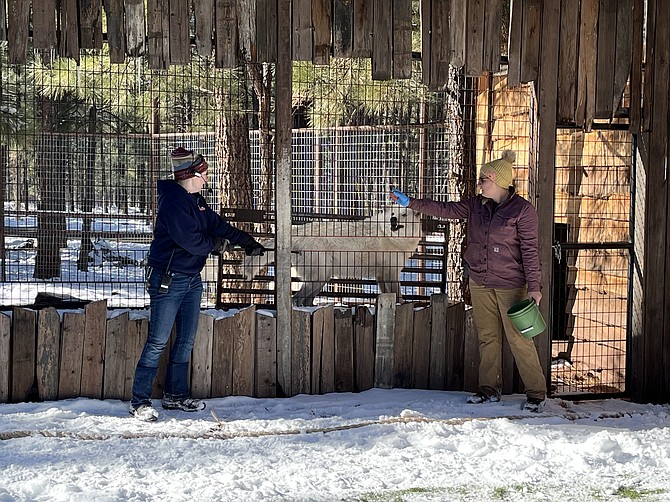 A wolf at Bearizona backs into a syringe in exchange for a treat. (Summer Serino/WGCN)

“The wolves are always a hit. Everybody likes wolves,” O’Connell said. “To be able to get up close and see how smart they are and to see the training that’s happening, it’s hard to beat that.”

We were allotted about 15 minutes to walk around and observe the wolves. With a barrier in between us, we were able to stand just a few feet away from them.

We got back on the bus and saw the remaining animals in the drive thru: bear, elk, bison and more. When we pulled up to the bison, Westerdale parked the bus and handed us all a few apples. The 1,000 to 2,000-pound bison surrounded the bus and waited for us to toss each apple. At one point, Westerdale opened the bus door and a huge bison stuck its entire head in! Once the fruit ran out, we continued back on the road to view more animals. 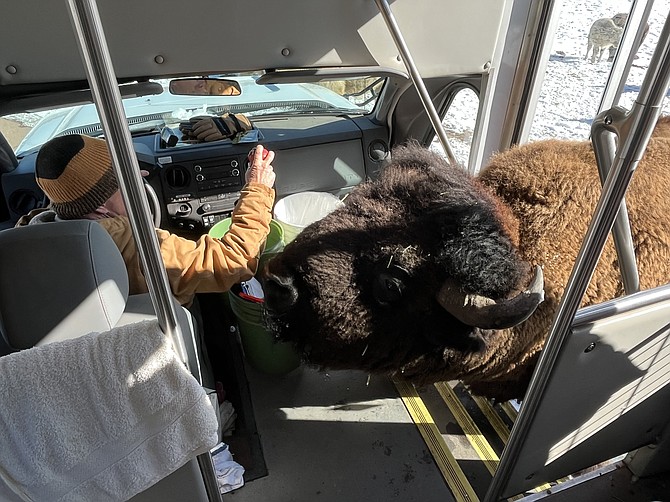 A bison sticks his head in the VIP bus hoping tour guide, Norm Westerdale, has some extra apples. (Summer Serino/WGCN)

At the end of the drive-thru, Westerdale dropped us off at the entrance of the park. Guests were then free to roam the park, grab a bite at the Canyonlands Restaurant or even get in their vehicle and do the drive-thru again. Guests could also hit the gift shop where they were granted 10% off as part of the VIP package.

I cashed in my drink coupon and reflected on what my favorite part of the experience was. Between a bison sticking his head in the bus, an up close look at the wolves or a porcupine eating right out of my hand, it’s hard to just pick one. Although at the top of my list was the amount of freedom and enrichment I saw the animals receive in their training. It wasn’t something I was necessarily expecting to see on a wildlife tour, but am so glad I did.

“To be able to work with the animals and give them so much choice in their life, their lives overall are so much better because of it," O’Connell said. "I think that’s neat to see for people who have been in town for a while who maybe knew Bearizona when it started and haven’t been back to see where it’s gotten to. There’s a lot of new stuff to see and it’s all things that you can learn on the tour.”

The VIP experience starts at $50 per person. A regular park ticket must be purchased as well. Entry and the VIP tour is free for children up to three years old. The tour is approximately 90 minutes long and only offered on select dates. 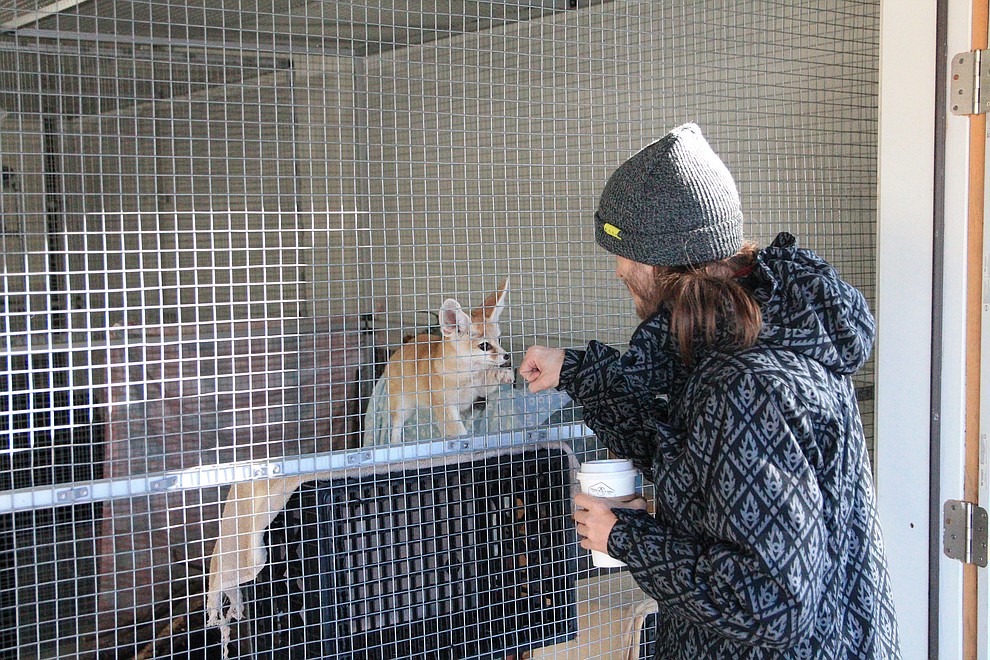 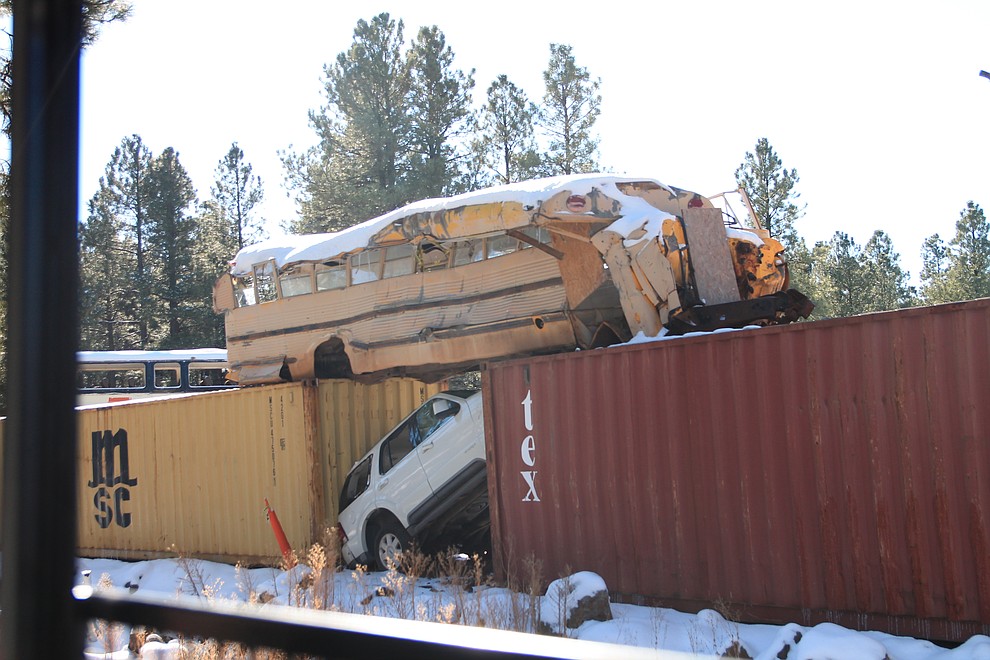 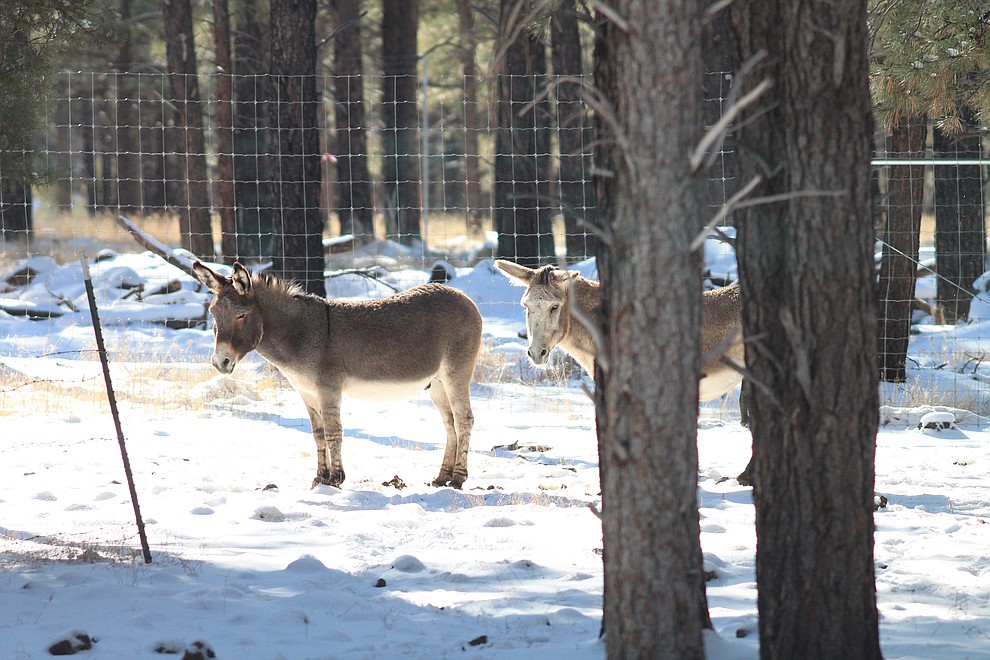 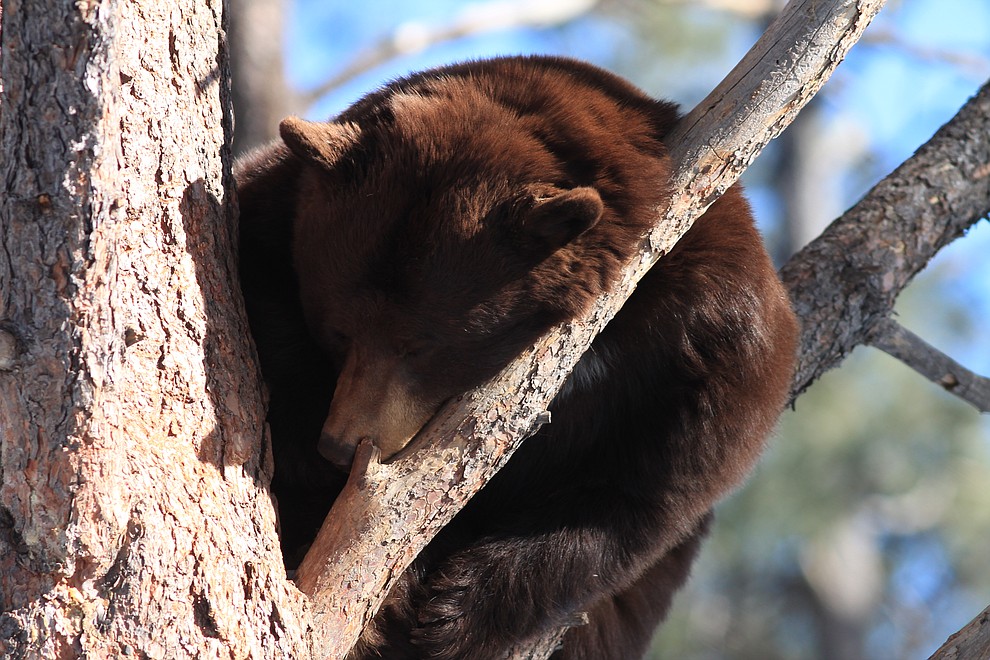 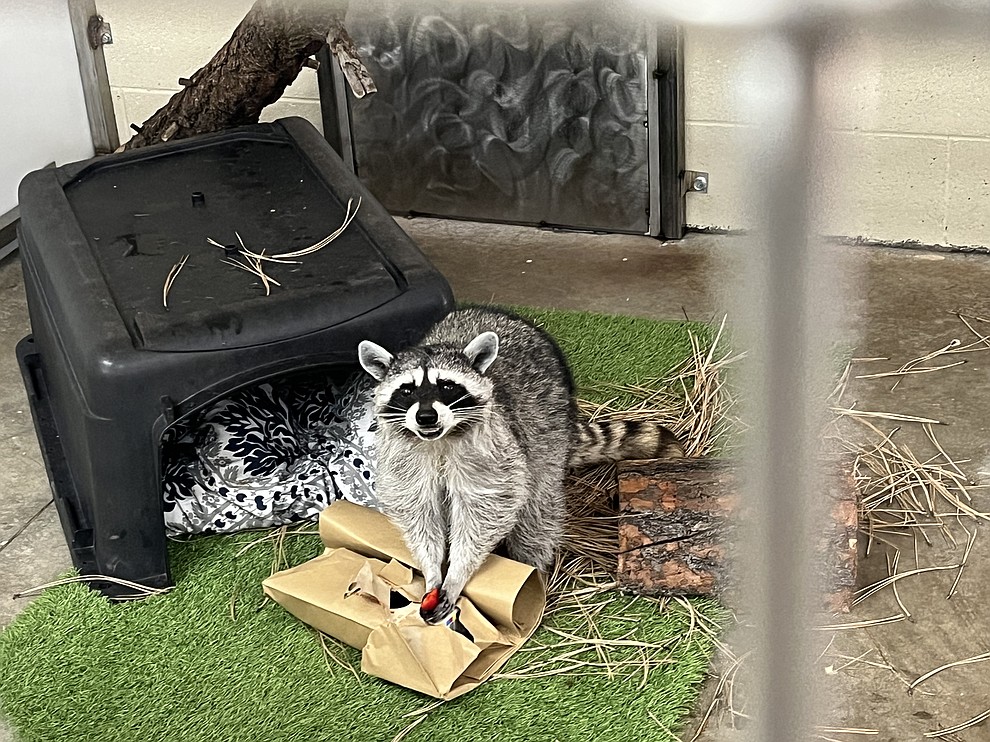 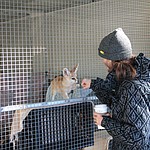 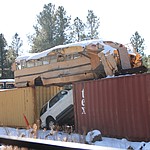 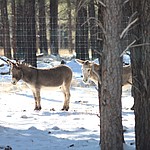 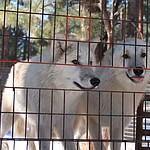 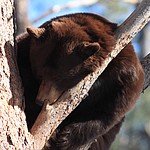 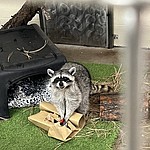