Campaign for YMCA of Yavapai County aiming to raise $5M-$10M 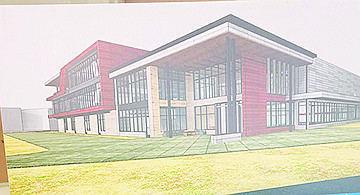 Rendering of what the YMCA of Yavapai County in Prescott Valley would look like once its complete. (Debra Winters/Courier)

The YMCA of Yavapai County, which will be located in Prescott Valley, continues to seek community support to raise $5 million to $10 million via an ongoing fundraising campaign.

The facility will incorporate between 40,000 and 65,000-square feet on a five-acre parcel of land located near the town center.

Some proposed features could include on the ground level an indoor pool, gymnasium, classrooms, community kitchen, childcare and multipurpose room to mention a few things.

In addition, the second floor would house the indoor track, wellness area, free-weight and workout area, and a designated spin classroom. The third floor would include a rooftop track, studio and covered terrace.

And the exterior would include an airnasium, which is an outdoor covered area, public plaza, a playground, outside splash pad, along with 200 parking spaces in addition to a drop off/pick up area.

The planned location for the YMCA is located south of Bob Edwards Park and was donated by the Fain family. It would be centrally located near the Prescott Valley Library and the Civic Center.

Children will have access to outdoor activities and sports.

An enticing aspect of the proposed location is the close proximity to several local schools that would be within walking distance to the YMCA including Bradshaw High School, Glassford Hill Middle School and Yavapai College.

The fundraising target is approximately $17.5 million, however roughly $28 million would allow for exciting amenities and programs. Over $3 million has been raised so far in charitable gifts and pledges, with another $5 million in requests still under consideration, with more planned.

A recent study done by the Gill Wright Company via mailers that was sent to residents questioned what they would be interested in, and it offered numerous results, explained campaign director Chris Sar.

“Replies were off the chart. It was the highest response the company ever saw they said. Five percent is usually accepted as good, our YMCA study had a 25 percent response.

Anyone interested in making a fundraising donation can do so by going to the Prescott YMCA website at prescottymca.org/prescottvalley and click the Prescott Valley tab and scroll down to the blue “Campaign Pledge Form” and send that to Marsha Hollaway, or bring it into the Prescott YMCA, located at 750 Whipple St.

This story was originally published by The Daily Courier.