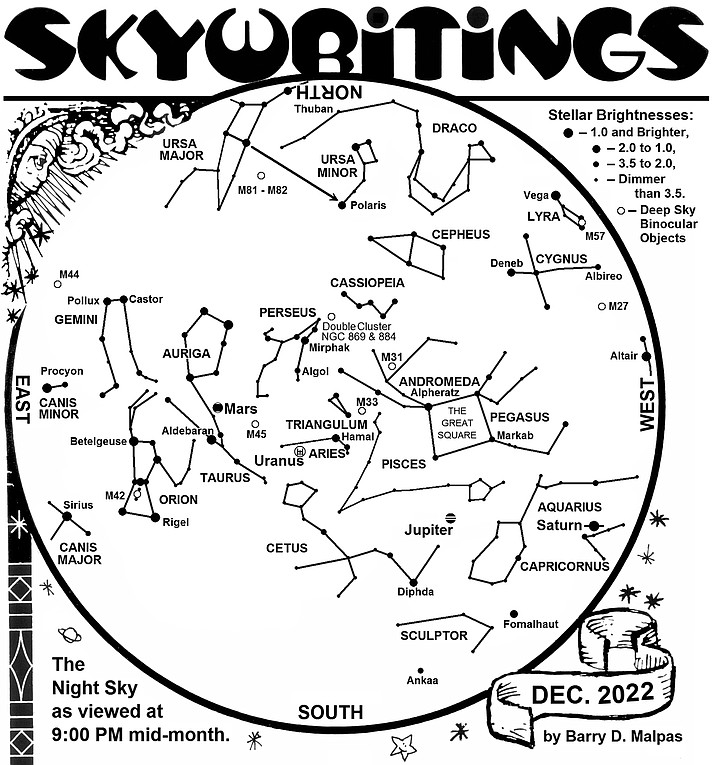 Mars has again returned to the evening sky and appears close to the Pleiades in the constellation Taurus.

The red planet has been in the minds of both astronomers as well as the general public since the invention of the telescope. And over the past several decades, scientists have sent a variety of satellites and rovers to the planet, where they have learned much about its terrain, its weather, its geologic past and whether it is considered habitable.

The solar system formed into its current structure about 4.5 billion years ago. Both Mars and Earth were created from the same materials and, in the beginning, they appeared very similar. Each had a central core, a rocky mantle, and a solid crust, with oceans and an atmosphere.

About 4 billion years ago Mars, which is 10 percent the mass of Earth, cooled faster, which shut down the dynamo that sustained its magnetic field. This left the planet vulnerable to the energetic solar wind, which allowed the Martian atmosphere to be mostly stripped away within only a few hundred million years.

Scientists have also found evidence of ancient oceans, traces in the northern hemisphere that in the past experienced sea level rises consistent with a warm and wet climate. These oceans are estimated to have been at least 1000 feet deep, and up to 3000 feet. The oceans were also affected by the lack of a magnetic field and no tectonic plate movement. Low gravity also contributed to the water dispersing into space. It is estimated that the oceans only existed until about 3.7 billion years ago. After they disappeared, the surface froze for approximately 450 million years.

Much of the surface rocks of Mars contain Iron. The early oceans, along with the atmosphere, would have also promoted oxidation of the rock, effectively turning much of it to “rust,” iron oxide, which is why we observe a reddish Martian surface today, not unlike the red cliffs seen in Sedona.

But what is Mars’ weather like now? Without its thermal blanket, i.e. a thick atmosphere, Mars does not retain any appreciably regulated heat energy as on Earth and a daily temperature swing can vary over 200 degrees.

On average, the temperature on Mars is about -80 °F. And in winter, near the poles, temperatures can plummet to -195 °F. However, the temperature at the equator at noon in the summer can reach about 70 °F. The pressure of the atmosphere on Mars is less than 1 percent that of the pressure on Earth at sea level, which is about the pressure you would find at an Earth altitude of about 40 miles. Keep in mind that commercial airlines peak at less than a quarter of that altitude.

Most Martian snow exists particularly at the polar caps, and is mostly frozen Carbon Dioxide (CO2, dry ice). Liquid water cannot last on Mars as it sublimates (goes directly from solid to gas) when it is exposed to the atmosphere. Hence Martian water is locked underground and is only found as shallow ice deposits a few inches below the surface. Because of this, any water is greatly contaminated with toxic salts making it undrinkable, requiring high purification.

In consequence, Mars is a failed Earth. Billions of years ago, rivers and ponds could have been able to provide a potential habitat for microbial life, or possibly even bacteria or fungi for a time deep beneath the soil. But did it? The evidence for the possibilities of past life on Mars has been and continues to be of interest in astrobiology because of the planet's proximity and similarities to Earth. Unfortunately, to date, no proof of past or present life has been found on Mars. The next several decades, with our better and more advanced technologies, and the probability that people will travel to Mars will, undoubtedly, provide the definitive answers.