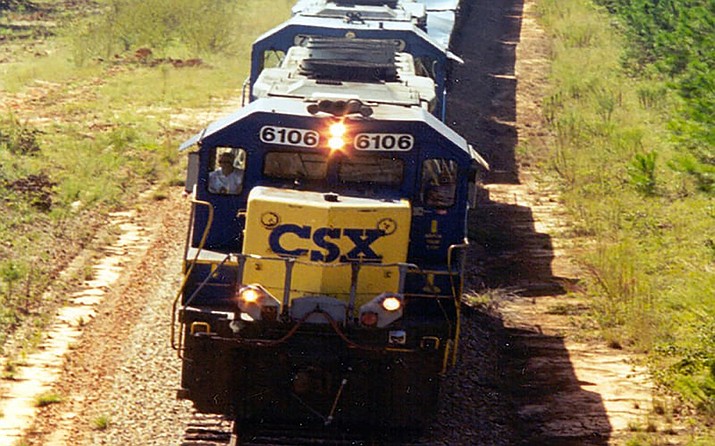 The House gave bipartisian approval to a measure that would head off a possible national rail strike. The bill now heads to the Sentate for approval. (Photo/U.S. Department of Energy)

WASHINGTON – Most members of Arizona’s congressional delegation joined the rest of the House Wednesday to give overwhelming bipartisan approval to a bill that would head off a national rail strike by imposing contract terms on rail workers’ unions.

But the delegation - and the House - split on party lines on a second proposal that would mandate paid sick leave for railroad workers, a key demand of unions that was largely rejected by management in the latest tentative contract.

That contract was rejected in November by four of the 12 affected unions, setting the stage for a possible strike as early as next week that lawmakers and the Biden administration said would be crippling to the nation’s economy.

That led President Joe Biden, whose administration helped broker the tentative contract that was offered to union rank-and-file in September, to call on Congress to pass legislation forcing the unions to accept the tentative agreement.

“Without the certainty of a final vote to avoid a shutdown this week, railroads will begin to halt the movement of critical materials like chemicals to clean our drinking water as soon as this weekend,” Biden said in a statement after the Nov. 30 House votes.

The measures still have to pass the Senate before heading to Biden, who has promised to sign them.

The votes put Democrats, including Biden, who likes to call himself the most pro-union president in history, in the uncomfortable position of forcing union members to work under a contract they had rejected. But most said the economic impact of a strike was too great not to act, and they clung to the paid leave measure as cover.

“While I don’t believe the tentative agreement goes far enough, the votes today avoid a devastating economic shutdown and provide an additional seven days of paid leave for rail workers,” said Rep. Raúl Grijalva, D-Tucson, who said the Biden administration should have pushed harder for sick leave in the tentative agreement.

Arizona’s House delegation split on party lines on House Concurrent Resolution 119, which called for seven days of paid sick leave, with all five Democrats supporting it and all four Republicans opposing it. The full House voted 221-207 for the bill, with just three Republicans crossing the aisle to vote with Democrats in support.

House Joint Resolution 100, which would force the tentative agreement on the workers to avert a strike, drew 79 Republicans, who joined 211 Democrats to approve it by a 290-137 vote.

In Arizona, only Republican Reps. Andy Biggs of Gilbert and David Schweikert of Fountain Hills voted against the measure. They did not immediately respond to requests for comment Wednesday, but Biggs, like many Republicans, took the opportunity to criticize Biden on Twitter.

“Congress should not have to bail out Joe Biden’s failed negotiations with railroad unions,” Biggs tweeted before the vote Wednesday. “So much for him being the most ‘pro-union’ president in American history.”

Biden appointed a Presidential Emergency Board to work with unions and railroads on a tentative contract. That proposal included a 24 percent pay raise and was signed off on by leaders of all 12 unions, but was rejected by members in subsequent votes – apparently over the lack of paid leave.

“The real big stickler among many of us that were voting on this contract, that what they didn’t address, the sick time, all we were getting was one day,” said state Rep. Richard Andrade, D-Glendale, who is also a member of the Brotherhood of Locomotive Engineers and Trainmen.

Andrade said he was not surprised by the House vote – “We knew this was going to happen” – but still called it “sad that Congress, that they would have to do that, but that’s where we’re at.”

“There’s no way in the world, the president or Congress allows us to go on strike,” said Andrade, who works for the Burlington Northern Santa Fe rail yard in Winslow.

“I mean, corporate greed has taken over. And they’re trying to get us to do more with less from running longer trains, with less crews, to not having any time off,” he said. “And this is what we’ve always said – this isn’t about the pay, 24 percent pay raise is great.”

Like many Democrats, Rep. Ann Kirkpatrick, D-Tucson, cited her support for the added leave in HR 119.

“Today, I voted to add seven days sick leave to the rail agreement because workers in this country deserve to be treated with dignity and respect,” Kirkpatrick said in a statement. “I’m hopeful the Senate will do the right thing and retain the additional sick leave, otherwise we’re leaving some of America’s critical workforce out to dry in these negotiations.”

Grijalva vowed to “continue to fight to ensure we protect collective bargaining rights and champion paid leave for workers across every industry.”

Andrade said there is not much workers can do at this point except watch the Senate and hope.