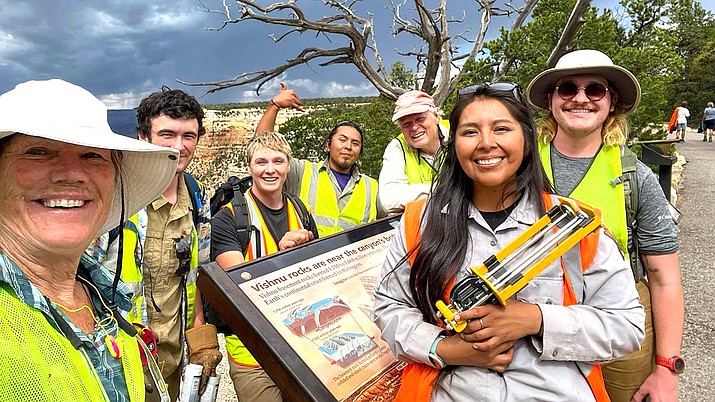 The Trail of Time, which opened in 2010, is a relatively flat, paved walk along the Canyon Rim Trail. The Main portion of the exhibit is between Yavapai Geology Museum and Verkamp’s Visitor Center, at the edge of Grand Canyon Village — a little over 1.3 miles.

After 12 years, the asphalt and markers were in need of repair/replacement.

Professors Karl Karlstrom and Laura Crossey, from the University of New Mexico, and three UNM geology graduate students, joined members of Grand Canyon National Park’s Trail Crew in making repairs to the asphalt and reinstalling almost 100 of the 2,500 markers.

To accomplish this, crews used a circular rock saw and had to, in some places, cut entirely through and remove sections to enable fresh asphalt strips. In other cases only a patch was replaced. Where needed, new medallions were fabricated.

Grand Canyon Conservancy provided funds to complete this project. Grand Canyon National Park provided Trail Crew assistance and tools. The park’s Division of Interpretation and Resource Education arranged for team member housing, and the University of New Mexico team was supported by a grant from the National Science Foundation.

About the Trail of Time

The Trail of Time is a geologic timeline. Each meter walked on the timeline trail signifies one million years of Grand Canyon’s geologic history. Walking the trail gives visitors a visceral appreciation for the magnitude of geologic time, according to GCNP.

Inset bronze medallions mark visitor’s locations in time along the trail; every tenth marker (one-meter spacing) is labeled in millions of years.

Along the timeline trail are a series of polished rocks representing each of Grand Canyon’s colorful layers, as well as waysides that explain how Grand Canyon and the rock layers formed.

The exhibit was installed with funds from the National Science Foundation, the expertise of Grand Canyon geoscience academic researchers from the University of New Mexico and Arizona State University, and a partnership with Grand Canyon National Park.

More about the Trail of Time is available at www.nps.gov/grca/planyourvisit/the-trail-of-time.htm.