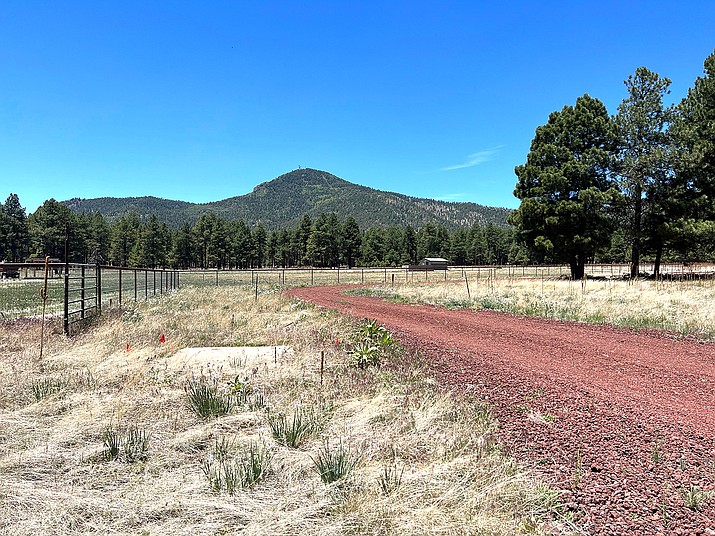 WILLIAMS, Ariz. — Although there has been no notice of intent filed with the U.S. Forest Service for a proposed pozzolan mine on Bill Williams Mountain, concerned neighbors and community members have begun to mobilize and have created The Protect Bill Williams Mountain coalition to fight future mining.

The group formed after Drake Cement LLC recently placed mining claims over nearly 850 acres on the east side of Bill Williams Mountain.

Steve Dudley, a homeowner that backs U.S. Forest Service land where the claims have been staked, is concerned about the impacts to not only his neighborhood, but to the entire community of Williams.

The mining would generate a huge visible scar on the east face of the mountain, which borders dozens of residences, is a popular area for recreational use and is the watershed for the city of Williams, Dudley told the Williams City Council earlier this summer.

Drake Cement LLC was approved for a similar pozzolan mining operation northeast of Williams near Frenchy Pit last year, and is now in the exploratory process to find more pozzolan in the Williams area for its cement plant near Paulden, Arizona.

"We have already received official letters of opposition to mining from The City of Williams, The Coconino County Board of Supervisors, and The Sierra Club," the group said on their website.

The group said their goal with the website is to provide information about Drake Mining and Material LLC's proposed pozzolan open pit mine, and convince or persuade Drake to reconsider the location.

The group is not only concerned about the visual impacts of mining, but also the environmental impact with blowing dust and contamination to the city's water supply.

"Open pit mines should not be allowed to operate in or near a critical watershed," the group said. "This proposed mine would be a direct threat to the Cataract Creek and Dogtown Watersheds that supply drinking water to the residents of Williams. Drake should find another location to mine what is a common material in Arizona."

According to the company, Drake Cement is in the beginning phases of looking for pozzolan.

"This exploration will involve digging eight small trenches, each measuring about 200 square feet. Once the exploration is complete, these trenches will be graded and repaired and the removed materials completely restored, per U.S. Forest Service guidelines," they said.

The group has stated they would like Drake to reconsider the location before filing a notice of intent.

Dudley has contacted Bureau of Land Management and USFS officials, and brought his research to the Williams City Council meeting June 8.

The Mining Law of 1872 is very durable,” Dudley said at the earlier council meeting. “Basically there’s not much you can do to circumvent or defeat it once it’s set in motion.”

The Protect Bil Williams Mountain website can be found at https://protectourmountain.wixsite.com/protect-bill-william.

More information about Drake Cement can be found at https://drakeus.com/products/cement/