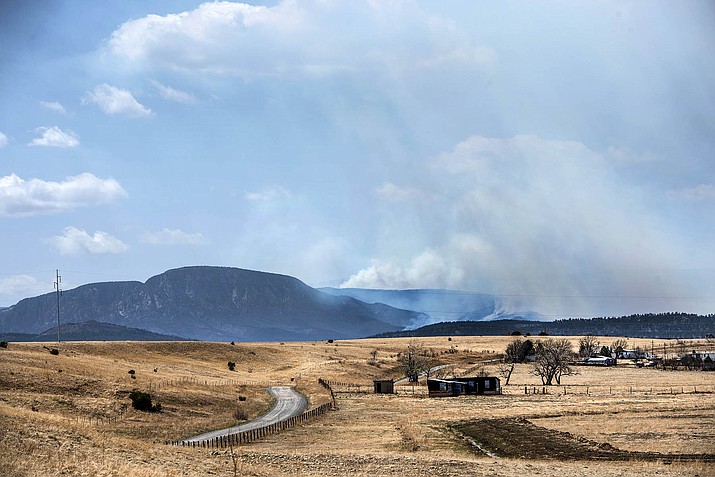 ALBUQUERQUE, N.M. (AP) — Thousands of firefighters continued to slow the advance of destructive wildfires in the Southwestern U.S., but officials warned they were bracing for the return of the same dangerous conditions that quickly spread the wind-fueled blazes a week ago.

At least 166 homes have been destroyed in one rural county in northeast New Mexico since the biggest fire currently burning in the U.S. started racing through small towns east and northeast of Santa Fe on April 22, the local sheriff said.

Winds gusting up to 50 mph were forecast April 29 in the drought-stricken region. One expert said it's a recipe for disaster on the wildlands where some timber has a fuel moisture drier than kiln-dried wood.

"Like we saw last Friday, epic fire behavior," Turner said. "It's a day that as a firefighter, we'll write about, we'll read studies about. It's going to be a big fire day."

A swath of the country stretching from New Mexico and Colorado to Kansas and the Texas panhandle is expected to be hit the hardest by the return of the bad firefighting weather that has generated unusually hot and fast-moving fires for this time of year, forecasters warned.

Red flag warnings for extreme fire danger were in place April 29 for nearly all of New Mexico and parts of Colorado, Texas, Oklahoma and Kansas.

More than 3,000 firefighters were battling fires in Arizona and New Mexico on April 29 — about half of those in northeast New Mexico, where more than 187 square miles of mostly timber and brush has been charred.

They focused April 28 on preventing it from moving into the rural New Mexico community of Ledoux. That meant bolstering fire lines and sending in crews tasked with protecting structures.

"Great progress again today," incident commander Carl Schwope said. But "tomorrow has the potential to be a very destructive day."

"It will be chaotic if anything close to what happened (last) Friday occurs," added operations chief Jayson Coil.

Sheriff Chris Lopez, of New Mexico's Miguel County, confirmed for the first time April 28 the fire there has destroyed at least 166 homes, 108 outbuildings and three commercial buildings. He joined authorities in neighboring Mora County in pleading with residents to pay close attention April 29 to sudden changes in closures and evacuation orders. 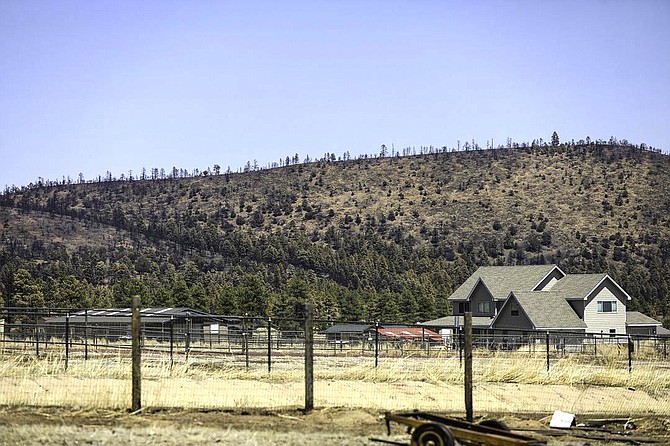 A hillside is seen burned in the background April 25, 2022, while a family home was fortunate to escape the Tunnel Fire unscathed after the fire burned over 21,000 acres and at least 24 structures in the area, near Flagstaff, Arizona. (Rachel Gibbons/Arizona Daily Sun via AP)

Turner, the fire behavior specialist, said the gusty winds are only part of the problem. He said moisture levels in downed logs and woody debris are "extremely dry" — just 2 percent in small twigs, pine needles and grasses that "actually carry a forest fire across the landscape."

In northern Arizona, authorities downgraded some some evacuation orders at a fire that has destroyed at least 30 homes near Flagstaff. It's now estimated to be 43 percent contained.

Another fire 10 miles south of the community of Prescott was 23 percent contained, but officials at both blazes warned of worsening conditions expected April 29.

Elsewhere, one national wildfire management incident team continued to oversee a large prairie fire in Nebraska, where more than 200 firefighters were battling a blaze that has been burning since last week.

About 68 square miles of mostly grasses and farmland have been blackened near Nebraska's state line with Kansas. Several homes were destroyed and at least one person was killed. That fire was 97 percent contained April 29.

Sonner reported from Reno, Nevada. Associated Press writers Paul Davenport in Phoenix and Margery A. Beck in Omaha, Nebraska, contributed to this report.